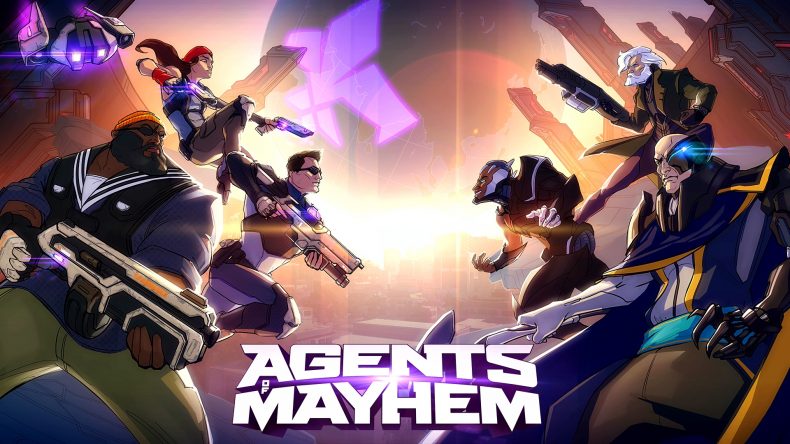 Because while Agents of Mayhem looks, plays, and even sounds very much like Saints Row The Third and Saints Row 4 at times, it’s totally its own beast, and feels fresh enough and accomplished enough to stand on its own. Set in an ambiguously futuristic Seoul, it tells the sweary, colourful story of a global special forces team and their battle to bring down the nefarious Doctor Babylon, a Bond-style villain of B-movie proportions, whose organisation, the Ministry of Pride, has developed a super weapon based on an experimental energy source. Babylon himself is all arched eyebrows, pretentious quotes and booming enunciation, while his followers (who are also the bosses you’ll fight along the way) fill in the various henchmen archetypes: the femme fatale, the mad physicist, the corrupted icon – you get the idea. The plot is pretty silly, as you might expect, but it does its job, providing a decent framework for all the explosions, swearwords and dick jokes you can eat.

The third-person shooting is actually a big improvement on the Saints Row games. Weapons have impact, movement is slick, and there’s a wonderful verticality to it all thanks to triple-jumps, boosts, and wall-grabs that allow you to climb buildings and leap between rooftops. As a result, combat often lives up to the title, as you bounce around battlefields, blowing up scenery and vehicles with gleeful abandon. Special attacks that unleash wrecking balls or cause civilians to explode like mini bombs just add to the insanity of it all. It’s not “dildo gun” silly, but it’s not far off at times.

You initially begin with three Agents: self-obssessed former reality star, Hollywood; shotgun-wielding man-mountain, Hardtack; and zippy cat burglar and “sky pirate”, Fortune. Each Agent comes with their own weapon, special move and “Mayhem Ability”, and you’ll almost always deploy as a squad of three which you can cycle between at will. As you progress you will unlock 9 more Agents (10, if you include the Jonny Gat DLC), until you’ve got a squad for every situation. They all have particular specialties, such as faster hacking, reduced ability cooldowns, or better defence/offence against a specific enemy. Experimentation is key to finding the trio that suits you, and even then you will likely have to vary your line-up based on the mission parameters. Personally, I find the precision afforded by Rama’s longbow more to my taste, while rollerskating tank Daisy is ideal for the heavy lifting, and Braddock’s air-strike Mayhem Ability is a great boss-killer. Although, dashing across rooftops as Fortune is crazy cool, too. Don’t be afraid to mix it up, and you’ll see just how diverse it can be.

You further augment each Agent by levelling them up along their individual upgrade paths, and by collecting Crystal Shards from the environment that unlock Crystal Cores, permanent upgrades of which each character has three. Additionally, equipment called “Gadgets” drop as random loot, allowing you to alter the effects of your Agents’ weapons and abilities. Special blueprints litter the world, which let your tech NPC, Gremlin, build new upgrades unique to each Agent.

There’s so much to do, you can’t help but be busy. Icons litter the map, denoting foot races, vehicle races, checkpoint challenges, combat missions, enemy outposts to destroy, and hostages to rescue from Babylon’s goons. Rewards range from Gremlin’s crafting materials to vehicle blueprints and character or weapon skins. Back at Mayhem HQ, you can also visit the VR Wreck Room to hone your skills or send idle Agents out to complete missions around the world that reward you with special rare schematics.

Humour is a major element in AoM and, while irreverent and often puerile, it still manages to be, at times, pretty clever. Pop culture references abound, and the script is surprisingly mature when dealing with things like the same-sex relationship between Agent Braddock and the Agency’s prim and proper handler, Friday. Having characters play off against each other as well as Friday, the other NPCs and Agency Director Persephone Brimstone, is a nice touch, even if the number of possible conversation branches means speech is sometimes a little delayed; also, the size and bustle of the world leads to occasional visual glitches and frame rate issues. It’s nothing game-breaking, but worth a mention nonetheless.

Comparisons to Saints Row and, to a slightly lesser extent, Crackdown, are inevitable, but Agents of Mayhem provides a fun, explosive adventure to get lost in. The side missions do become a little pale after a while, and the campaign missions outside the multi-stage boss fights are pretty formulaic, but the action, humour, diverse roster, and sheer amount of game on offer are enough to offset such complaints. It may not be a modern masterpiece, but Volition’s latest knows exactly what it wants to be and exactly how to be it.

The Saints Row vibe is strong, but Volition's latest is still a brilliantly bonkers blast-fest