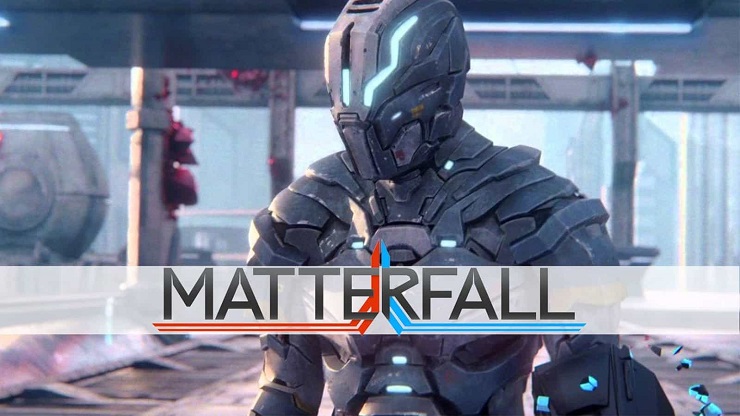 The people at Housemarque are masters of their field, creating fluid and fulfilling gameplay in every one of their score attack, twin-stick shooters, and frankly, Matterfall is no different. Adopting the 2D side scroller, the Finnish developers have once again created a bonkers, bullet-heavy shooter that gives you complete control in the most chaotic of environments. There’s plenty of strategies to take against the different enemies, and the level design is second to none, all whilst still managing to give you reason to replay for a higher score.

Whilst the story is as generic as they come, the gameplay is where you’re left in a woozy euphoria, jumping from one platform to the next, engaging in the same kind of score attack mentality as Nex Machina or Resogun, but requiring a more tactical mind. Matter is the game’s biggest mechanic, and utilizing this will help you to do a whole manner of things. By pressing L2 and aiming at certain spaces, you’ll create platforms to jump onto. Also, once a platform is created, enemies cannot move or shoot through them. They don’t remain opaque forever, so making sure you move quickly across the levels is a must; these enemies do not give you a chance to compose yourself, believe me. They are constant, fast, and aggressive as hell. Using Matter does deplete its stock, but by destroying enemies and focusing on these glowing blue auras will allow it to fill up again. Whilst Matter plays a big role here, so does Striking, and doing it whilst the iron is hot makes all the difference. By pressing L1, you can fly through platforms of Matter unlike your enemy. You can also fly through fire, and render enemies motionless for a short amount of time. Learning when and how to use both Strike and Matter in unison is an art, and something Housemarque uses to showcase its skill in the field.

Now it wouldn’t be a Housemarque game if it didn’t require oodles of gunplay in a reckless and relentless atmosphere. Thankfully, you’ll never be too far away from a fight, and the bullets will fly. Using the right stick will both aim and fire at surrounding enemies. When moving with the left stick, jumping (or double jumping) with R1, and Striking with L1, the feeling of fluidity is second to none. When it all gets a bit too intense, or you could do with unleashing a bucketload of damage, the Overcharge mechanic becomes very useful. Once you’ve built up your Overcharge, pressing Square will slow things down significantly, and using the right stick will fire your gun, but instead of one stream of bullets, you’ll fire three of them. It helps to give you the edge, but it’s not easy to come by, so learning to use it when you absolutely have to is key. Augmentations give you a range of secondary fire, and make the world of difference. Throughout each level you have the option to save civilians who are trapped inside purple cocoons. Once rescued, some give you augmentations, and these can be anything from grenades to homing missiles. You can equip any four at the same time, selecting them with the D-Pad and firing with R2. Each one has a cool down so you can’t use them like your gun, but they don’t take long to recharge.

The levels are great to look at, and provide plenty of challenges, whether it’s getting through a particularly tough section of enemies, building multiple platforms on the fly with your Matter, making your way past the red poisonous smoke, or waiting patiently on one of the elevators before running into trouble. There’re also sections that require you to move through Zero G, and are one of the times in Matterfall where you lose a lot of the control you normally have when on the ground. These sections are tough, and are filled with indestructable turrets that shoot fire at you, so using Strike become more vital than ever here. Along with boss fights and moments of insanity, you can’t help but admire the things your eyes are treated to in your time with the game. Whilst it’s great to play, I did find some of the checkpoints were far apart, so getting through tough sections had to be repeated quite a bit. There are plenty of chances to regain health, but when you’re faced with loads of enemies, death will come and reliving the nightmare can become a bug bear. It’s a minor gripe, and if you’re a veteran with Housemarque’s brand of the genre, you’ll have no issues getting from one level to the next.

Matterfall is a work of art, and a lesson in game design. Not only is it smooth to play, and void of any technical failings, it’s a lot of fun. It’s one of those titles on PlayStation that you can put on and waste a few hours with, getting addicted to its masterfull gameplay, stunning visuals, and wide range of guns, bullets, and strategical options.

Checkpoints can be far apart

There's no question Housemarque once again gets its own brand of chaos spot on, and you're going to love what they've got in store for you this time.