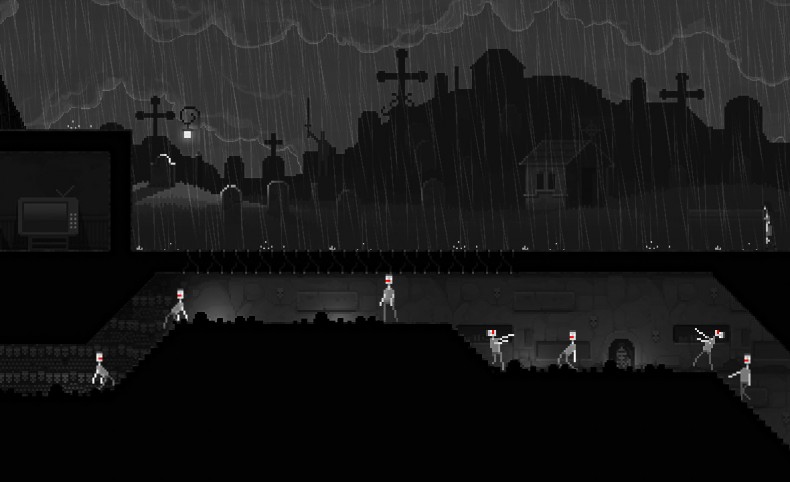 Our love of the zombie genre has grown exponentially in recent years, with countless TV shows, comics and video games overwhelming us like a horde of the undead. Shows like The Walking Dead have helped to breed a certain love of these monsters of realism, and although there is so much to consume, it’s always a welcome treat being introduced to a new game within the medium. Zombie Night Terror does something new and it does it excellently. It’s a big nod to past inspirations and a clever attempt at breathing life into a tiring genre.

The game starts when a moviegoer of your choice gets infected by a cool new street drug called Romero (wink wink), leading into a mass panic of infection and death. You are the overlord in charge of spreading the zombie plight and it’s up to you to make sure everybody dies. There’s a story threaded through each of the many levels that follows the creator of the drug, and it does just enough to help explain and give background to what’s going on. In many of the stages there’s a TV that features news updates from big chested news reporter called April Fox, giving you updates on all of the new power ups and upgrades you unlock along the way. If you’ve ever played Lemmings, your horde will follow a similar path: control every zombie you can and lead them to the level’s objectives. These objectives normally want you to kill a certain number of civilians or find a way towards the exit, with other variables thrown into the mix. There are also bonus missions you’re given like killing specific people (cannibals, cowards hiding under desks – you get the picture) or destroying certain objects which help to flesh out each level. There’s an interesting difficulty spike, and there’ll come a point when the game becomes much more of a challenge. It’s a welcoming challenge though and it gives the game more appeal after finding most of the first 10 missions pretty easy to complete.

The folks you’re trying to kill get a lot tougher as you progress. They know zombies are taking over and growing in numbers so they resort to baseball bats, rifles, and explosives to stop you. There are lots of power ups for you to take advantage of, and thanks to April Fox you’re given a background as to how you can combine them for maximum effect. One power up for example is the zombie barricade: one of your followers drops anchor and roots itself into the ground, stopping any of your zombies from getting past. If you select the speed power-up the barricade will launch every zombie forward, making your entire undead army similar to the infected in 28 Days Later. It’s such a rush setting this up, especially when you’ve built up over 40 zombies, and watching them run at a group of humans and ripping them to shreds in a heartbeat is unsettling yet satisfying.

You can jump, crawl and explode (among other enhancements), but each time you use one it takes away a small amount of DNA. This is a currency and by using it too much, your apocalypse can run out of steam. The more you kill, the more DNA you receive and there are green vats of liquid containing DNA giving you a top up, but unless you play smart the survivors will gun you down and ruin your attack. You can zoom out and get a good grasp of your playing field; working out when you are going to use your power ups quickly can mean all the difference, but it’s important not to underestimate the resolve of the human spirit. The 8-bit art style is perfect for Zombie Night Terror. It’s a bloody, gory mosaic of red liquid and shades of grey, occasionally introducing sparse luminosity throughout. There are references to plenty of zombie franchises such as the ‘Dead Inside’ doors of The Walking Dead and the ’28 Doors Later’ achievement, but the music bleeds 80s horror. It’s a wonderful amalgamation of love for a hallowed era and bags of talent in the creation of a great score and superb artwork.

Zombie Night Terror is a fabulous throwback to the Lemmings games, replacing fluffy suicidal rodents with dead corpses suffering from severe bloodlust. Each level is unique and even if the objectives become similar the more you play, you’ll begin to think differently and more efficiently if you want to finish with top marks. Plus, the humans all sound like Pingu going through a whole manner of emotions which is very funny and worth your money alone. Zombie Night Terror is a pleasant surprise and a lot of fun, and definitely worth checking out if you love zombies, horror, humour and great gameplay.

Can take time to adapt to new power ups

A wonderfully designed zombie romp, providing a tough challenge with some fantastic humour and music along the way.