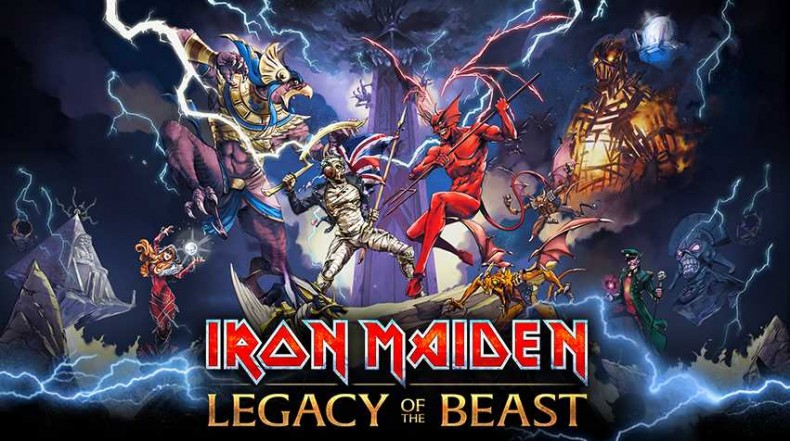 Considering he’s a desiccated corpse, Eddie (mascot of British heavy metal Legends Iron Maiden), has certainly been around for a while. He’s graced the band’s album artwork since 1980 through the talents of many different artists, and back in 1999 starred in the album-cum-PC game Ed Hunter. Now Iron Maiden are trying their hand in the realm of videogames again in free-to-play form.

The game sees Eddie crashing down to earth after a mysterious object shatters his life force and steals parts of his soul to conquer the world. Eddie will have to battle through worlds based on Maiden’s album artwork to put himself back together and return the world to normal. It’s not original from a story or mechanical standpoint, but for fans of the band, it’s a chance to get lost in worlds inspired by favourite album covers, and enjoy the in-jokes and wry nods that punctuate the narrative (some of the ‘conversations’ between Eddie and his goddess companion can be quite funny); this is like Kingdom Hearts for Iron maiden fans.

What I didn’t expect was to find that this is an RPG-lite. Eddie drags around two minions and turns are taken for foes to defeat each other. There’s your usual rock, paper, scissors style of elemental gameplay, meaning you have to think about which attacks you use against which opponents to ensure maximum damage output, as well as moments where you need to tap to a rhythm to ensure the highest total power for a skill to be used.

As you progress you’ll regain parts of Eddie’s shattered soul which can then be equipped to Eddie to be switched between during battle, allowing you to gain the upper hand against an elemental being that you were weak against before, this at least gives you some leeway with regards to selecting your party minions. The thing with those, is that regularly you’ll have to unlock new ones from gems using ‘The Book of Souls’, but there’s very little incentive to do so as you’ll more than likely settle on two members and just carry on leveling them up. There’s so many of them, and leveling them up from scratch is a lengthy business, especially further on through the game, as a result you’re better off putting your resources into your current squad than bothering with trying to bring in a new one.

It’s the myriad of mechanics that lets the game down. You earn experience from fighting, but you can also feed runes to minions to help them level up and you can evolve them, but you can also equip them with talismans which can also be powered up and evolved, then you only have a certain amount of monster slots, and/or cash to use to power things up, which means you then need to feed some other kind of currency into something to facilitate something else; it certainly doesn’t take long for all of this to become incredibly chore like.

I guess if you’re after a free RPG-lite you could do much worse than Legacy of the Beast, although it shouldn’t be much of a surprise that the people to get the most out of it will be Iron Maiden fans. It’s just that without that connection to the source material you probably won’t find very much here to keep yourself occupied for very long, but, hey, it’s something different to Pokémon GO, isn’t it?

Can I play with madness? No, but for free you could do much worse than this.