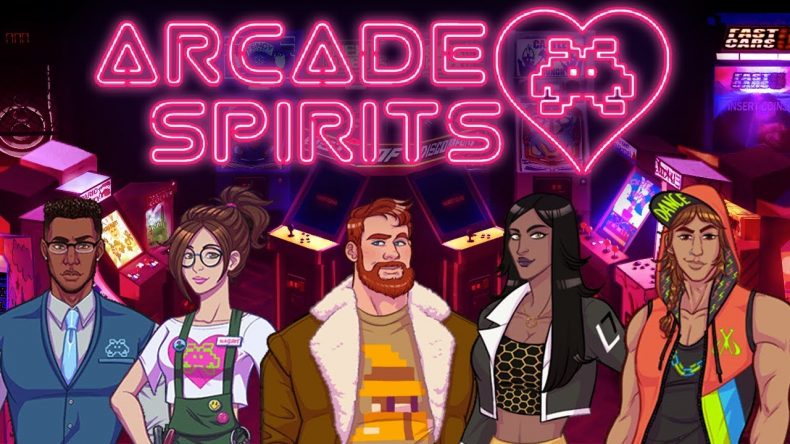 There’s nowhere quite like the arcade. Whether you’re there for a retro game, some light gun action, or just to play on the 2p drops; the arcade is a place where families and gamers can unite in the search of fun and tickets. One of the perks of living in a once-popular seaside town, is that this relic of the past is still going strong here, and I can Skeeball to my heart’s content. For those in a less fortunate location, the arcade setting of new visual novel Arcade Spirits will have to suffice.

Set in a modern world in which the gaming crash of 1983 never happened, in Arcade Spirits the arcade scene is still booming. The joystick still reigns supreme, and even eSports are played on cabinets. In this far superior world, you play as an incredibly unlucky and jobless person trying to make ends meet after a recent redundancy. When you get a recommendation for a personal assistant app from your flatmate, you find yourself working in a run down arcade looking for fulfilment, funding, and maybe even love. Who you play as is entirely customisable, with options for hair, skin tone, and even preferred pronouns. Gender has no impact on who is romancable, and the level of inclusivity on display is frankly heartwarming. Similarly, there is no forced option to find a love interest, and if you’d rather play platonically Arcade Spirits has you covered. You can happily make friends and influence people without so much as a peck on the cheek if you so desire.

To get people on your side, you’ll have to take note of the different characteristics attached to your conversation options. You can be Quirky (complete with puns and Dad jokes), Gutsy, Kindly, Steady and Basically, and each character and situation lends itself to conversing using one of these options. The game encourages you to act in the way that feels right rather than min maxing, and there are very rarely huge negative consequences to your decisions. You can turn the conversation type indicators off too, in case you’d rather spend time with your arcade buddies without the added information.

If the setting of Arcade Spirits appeals to you, then you are in for a treat. The game was clearly created from a place of sheer adoration for the arcade scene, with references to Polybius, Twin Galaxies, and even an in game documentary to guide you into making or buying your own MAME cabinet. It’s also never overbearing, and you don’t need any retro knowledge to enjoy the story. The narrative of Arcade Spirits has it’s twists and turns, but it’s overall a rather lighthearted tale about friends banding together and achieving their dreams. The positivity is utterly infectious, and there wasn’t a character in the game I didn’t adore. Helping them through their problems and guiding them towards a happy ending was all the more rewarding because of this.

The quality of the writing isn’t limited to the characters, and the entire story is very compelling and naturally written. There’s also some occasional voice acting throughout the game, which can be customised to be read as full lines, quips or turned off entirely. For some reason the volume is incredibly quiet when playing in handheld, so headphones or docked mode is key in hearing anything spoken. When I plugged my headphones in though, I found it added to the experience and made me even more invested in the characters within, especially my darling Teo. It’s fair to say that some dating sims have a more lewd appeal that some may find off-putting. Arcade Spirits is polar opposite of those games. When offering to hug a character you ask for consent, and there’s no NSFW content to be seen. It was incredibly refreshing to play a game in the genre that I’d be proud to play in a public place.

Arcade Spirits is an inclusive and heartwarming visual novel, with a backdrop of arcade cabinets and change machines. The writing is top quality, and the characters are simply delightful. With gameplay, romance, and customisation options for everyone, Arcade Spirits respects its audience and is a joy from start to finish.

The sound is hard to hear out of the Switch's speakers

A visual novel happy to include everyone, with a message of togetherness and characters you want to spend time with. The arcade setting is charming, and the writing is impeccable. An easy recommendation to anyone interested in dating sims, the arcade scene, or romantic (or platonic) love.