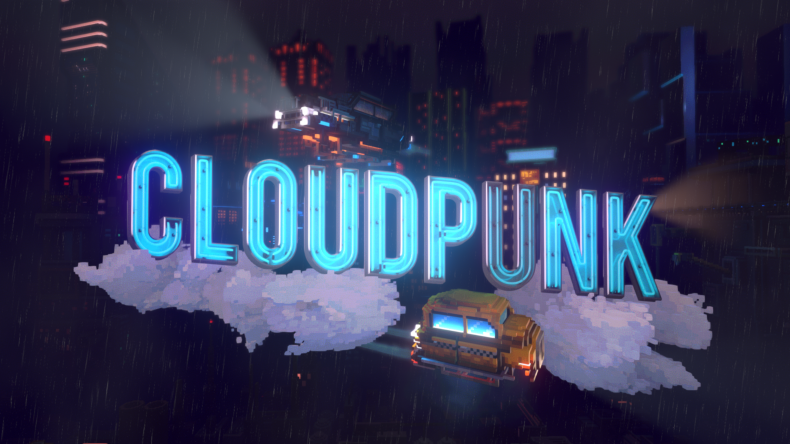 Everyone has had a bad day at work. Rania, the protagonist of Ion Land’s Cloudpunk, however, has probably the most interesting rollercoaster ride in her first day as a Cloudpunk driver. Having moved to the towering city of Nivalis in a bid to hide from the DebtCorps, Rania is hired as a delivery driver for the titular company. The job is simply to pick up packages and deliver them. There’s only one rule: don’t open the package.

In a city that’s full of corruption, greed and all manner of other cyberpunk tropes, of course Rania’s deliveries are a little south of legal. Whether it’s delivering mods to an illegal street racer or ferrying a person to their new home, it’s all a bit shady, as are most of the people she meets.

I’m rarely a fan of games that throw you right in, not teaching you the basics, but somehow it makes sense in Cloudpunk. Getting to grips with your HOVA, a Fifth Element-style flying car, doesn’t take too long as you begin weaving through traffic on every axis. You’ll refuel as necessary, visit garages to have any damage fixed, and basically learn as you go, the same way Rania has to learn as she begins the longest night of her life. 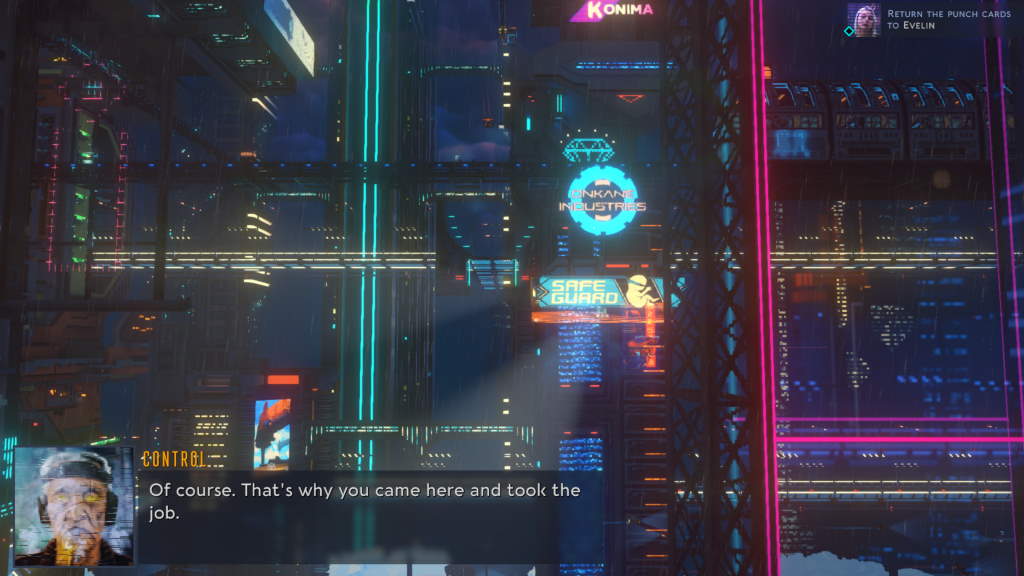 Control, your gruff supervisor, calls whenever a job becomes available. He slowly reveals little details about himself and the city, always leaving just enough mystery for you to use your imagination or want to uncover the reason why he won’t talk about certain things. This sums up Cloudpunk’s storytelling, really, as you follow the stories of everyone you meet in Nivalis. Even the smallest conversations feel like they add something to the game’s setting, heaping atmosphere onto the already rich cyberpunk feel of the city and its inhabitants.

There are so many stories to discover in Nivalis, even from the tiniest side quests. The elevator that thinks it’s a demon that eats people, the little girl who loves to watch street racers flying by, your android neighbour with her lost memories, they all bring the city to life, piece by piece. They breathe life into Rania too, showing just how human and compassionate she is, not to mention how little time she has for idiots and creeps.

Over the course of her first night on the job, Rania’s character is tested and decisions need to be made that will affect the story. She is at least helped by her AI companion, Camus. Camus is her dog, which means his thought process is quite innocent and he often provides light relief and even insightful comments where necessary. He just wants to help his friend, but ultimately he would love to be a dog again, once Rania can afford a new canine frame for him. Their relationship throughout the game is sweet, sometimes tugging at the heart strings too. I was taken aback at just how much heart runs throughout Cloudpunk’s story and characters. It caught me off guard several times, truth be told. A lot of this is down to Andrea Petrille’s performance as Rania. Some of Cloudpunk’s voice acting is a little wonky, but the main cast of Control, Camus and Rania are universally excellent, lending some real weight to the storytelling.

Obviously you need more than just storytelling in a video game. This is where Cloudpunk may be a little more divisive, as it’s never particularly action-packed. Indeed, most of the game is simply driving from one part of the city to another, often listening to dialogue along the way. It’s a very sedate experience, but it lets you soak up the atmosphere of the city as you navigate the highways or peel off into the darkness between the buildings. The glow of neon fills the skyline, buildings of all kinds reach high up into the roiling troposphere, piercing the clouds below you. That alone tells you just how high up Nivalis climbs, so when you eventually get to see what’s below the clouds, you’re suddenly introduced to a much more claustrophobic setting.

It’s not all about the driving, as you do spend some time running around the streets of various neighbourhoods. This is probably the weakest part of the game, usually because the fixed camera angles sometimes struggle to keep up with your movement. It does provide some excellent opportunities to meet some of the eclectic cast of characters that live all over Nivalis. It also allows you to find the collectibles that are dotted throughout Cloudpunk’s open-world setting. If you’re into that kind of thing, of course.

There are some issues, of course. No game is perfect, after all, and Cloudpunk definitely isn’t. On top of the iffy on-foot camera, the AI of Nivalis’ traffic is essentially non-existent, never deviating from its set path even if you’re in its way. This leads to some frustrations as you’ll often be forced to go get your HOVA repaired, but it’s rarely a huge problem. Once you get used to the controls, you’ll avoid most collisions anyway. There are also a handful of timed missions, one of which I failed because I’m convinced there wasn’t enough allotted time to get to my destination. These feel at odds with the sedate pace of the rest of the game, but thankfully failing them simply alters the story a little, instead of making you repeat them.

In fact, I don’t think there are any fail states whatsoever in Cloudpunk. It simply keeps on flowing, letting you explore the city and enjoy the story. Enjoy its soundtrack, too, as its synth-heavy focus is pure Vangelis, but merges nicely with a dramatic score that feels inspired by the sounds of Hans Zimmer and Harry Gregson-Williams. It’s incredibly atmospheric.

Cloudpunk’s often sedate pace and its striking, voxel visuals combine to create a truly unique game. It’s almost like a walking simulator or a visual novel, only you’re driving a flying car, but the storytelling and characters come to life in a similar way. It’s a special game that’s more affecting than expected. More than that, though, it really feels like a one-of-a-kind experience.

From its striking visuals and atmospheric soundtrack, to its fantastic storytelling, Cloudpunk really is a one-of-a-kind Cyberpunk experience.