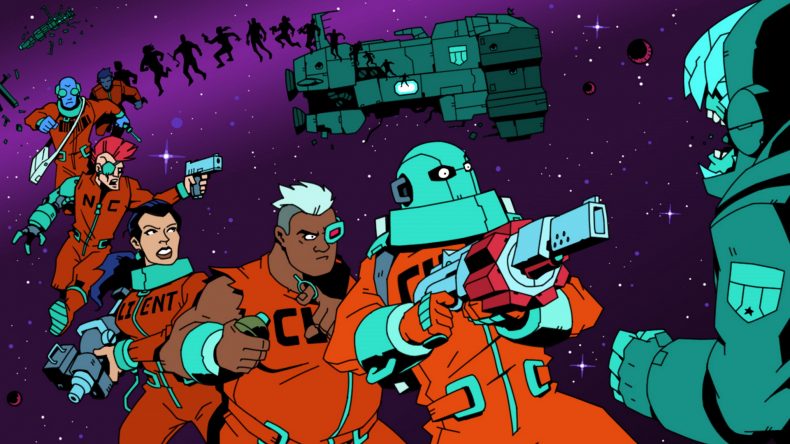 Switch Re:port covers the Nintendo Switch version of a game. Void Bastards was simultaneously released on Xbox One and PC on May 29, 2019 and scored 8.5/10 on Xbox One. The PS4 edition is also being released at the same time as the Switch edition.

I’ve often wondered if games that come to Xbox One’s Game Pass service get slept on unfairly, and Blue Manchu’s rogue-like first-person shooter definitely fits this mould. A sublime comic-book aesthetic that cleverly doesn’t over-complicate the action with aiming down sights, or complex mechanics when actually running and gunning, it was an absolute gem when it hit Microsoft’s terrific Game Pass service back in 2019.

Making the jump to Nintendo Switch has brought with it a few problems, however. Some you’d expect, and others that are surprising. First up, the age old problem of tiny text rears its head here. The combination of a lower overall resolution and that gorgeous visual flair actually works against Void Bastards. Put simply, the whites that surround the comic book that is the game draw the eye away from already small text. You can, thankfully, adjust the borders to suit your needs, but regardless of this, blown up on a TV screen the text is tiny and even people in my household with 20/20 vision struggle to read the font chosen for Void Bastards’ text. Ultimately this isn’t a huge issue, when playing the shooter-sections, which is the bulk of the action, it’s visually the same game, albeit a lower quality overall image. I’m growing to accept this kind of trade-off the longer the Switch gets great games to it, but Void Bastards also has a peculiar frame-rate issue. Most of the time it’s fine. It’s not a smooth 60fps, but it’s acceptable. There is a seemingly random frame-skip issue, though, that will almost push you along suddenly. It’s like the game is catching up, though it never got behind in the first place. I’d say it happens at least twice per mission, maybe more the longer you are looting a ship of its sandwiches, parts, and fuel.

It maybe sounds worse than it is, because what you’re left with here is a solid if not spectacular port of a game that people seemed to talk about for five minutes and then forget. Void Bastards remains a slept-on gem, that, despite Game Pass, seemed to vanish as quickly as it came. With a beautiful art style, tremendous humour (and great voice work to boot), and a fun loot-upgrade-repeat mechanic surging through its core, it’d be a shame to not recommend it. So there you go, despite a few technical issues, some unique to this game and others that are basically Switch Report staples at this point, you can still go in knowing you’re going to have a fun time with a game that really is a great fit for handheld gaming.

Despite some technical issues, Void Bastards on Nintendo Switch is a superb, clever game that deserves to be played. Don't sleep on it again!