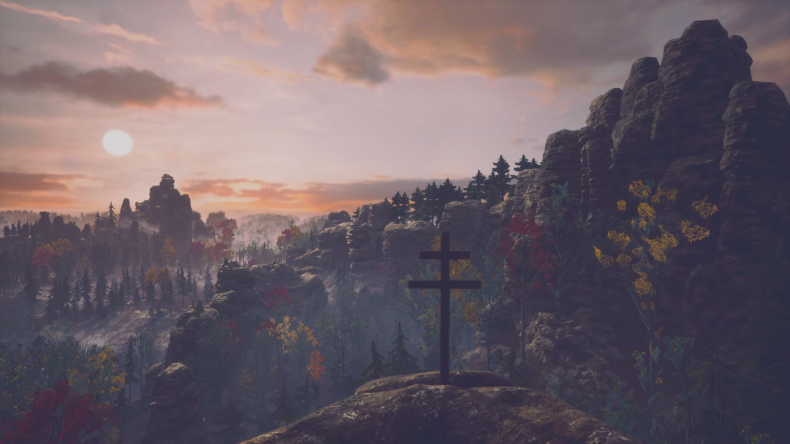 Having played Blair Witch not too long ago, it’s difficult not to compare Someday You’ll Return to Bloober Team’s tie-in game. The forest; the angry man getting angry at his ex-wife over the phone; the disorientation and general weirdness: it’s all here. Even the ill-advised stealth mechanics make an appearance, sadly. But CBE software’s horror title goes its own way, very quickly dropping you into the grim, almost Silent Hill nightmare worlds that may or may not be in leading man Daniel’s head.

Angry Dan is out looking for his daughter Stela, who has possibly run away or may have been kidnapped. Daniel doesn’t seem too concerned, either way. He knows she’s in the woods, as he tracks her phone’s GPS signal through his own smartphone, and he knows the region like the back of his hand, from helping to run a Summer camp there years ago.

Things soon take a turn for the weird, with the creepy old woman chanting at Daniel’s car window on the way in. It gets even weirder when he’s led to an obviously dangerous old bunker, with a strange, humanoid creature inside. It must be said that Someday You’ll Return excels at building atmosphere, but its execution is often lacking. This is mostly down to its lack of direction. It leans heavily on recreating the feeling of hiking through the woods, even having you follow trails by coloured markers, but it often leads to just wondering where you’re going. During one specific chapter, I had to find a doll, but its limbs were missing. Daniel commented on needing to repair it, only the game never told me what to do. In the end, I didn’t even have to repair it, just return to where I started the quest. This was just one of the many moments of confusion and frustration that Someday You’ll Return had to offer.

A side-effect of hiking around the woods in confusion, however, was that you really get to see how gorgeous the environment is. Based on real locations in the Czech Republic, the forest feels like a real place, with statues and natural monuments, many with their own fact-filled boards that explain the lore of the land. Whether lavished with rays of sunlight, or bathed in the ethereal glow of the moon, the natural backdrop for Someday You’ll Return is a sight to behold. Even when you’re forced into the dank tunnels below ground, the lighting is very impressive. You feel claustrophobic when you’re down there, paranoia creeping in as you wonder if there’s anything else down there with you. When you do meet the real dangers, however, it’s where the game falls down. You’re dropped into almost linear stealth sections, but it falls into the trap of punishing the player too harshly if you make a mistake. Wander around the wrong corner, despite not having any idea which way to go due to some iffy level design, and you’ll find yourself spotted. Even when you’re given the means to (sort of) defend yourself, it rarely makes a difference, which essentially means that you will instantly fail any stealth section if you’re seen at any point. Considering some enemies are cloaked in darkness or basically blend into the environment, it just felt unfair and instead of being scary, it simply became an annoyance.

What bothered me the most about Someday You’ll Return is that everything takes too long. It’s not just the long-winded hiking or the lack of direction leading to slow progression, it’s the way puzzles are more obtuse than necessary. Having to follow cryptic clues, leading to yet more hiking, and sometimes feeling like you aren’t given the tools to work out the answers you need. A hint feature would be very welcome, especially when you’ve run laps around an area for an hour. The crafting part of puzzle-solving is also a problem. While it’s initially interesting to have to use your tool kit to manually take something apart or rebuild an item, eventually it becomes yet another step too many in a game that’s filled with extra steps. Brewing potions requires chopping up each plant, then following instructions to add the separated ingredients in specific ways. Again, interesting at first, but soon grows tiresome as it drags the pacing back.

All of this is especially disappointing because the premise is interesting and the setting works incredibly well. The switching between normality and nightmare-like realms carries real Silent Hill vibes, there are hints of Blair Witch and even Amnesia: The Dark Descent, but often the build-up is ruined by the awkward execution. While it’s by no means a bad game, Someday You’ll Return just has a few too many issues to fully recommend.

Someday You’ll Return has some incredible atmosphere, but ultimately fails to scare due to some poor, forced stealth sections and tiresome crafting mechanics.