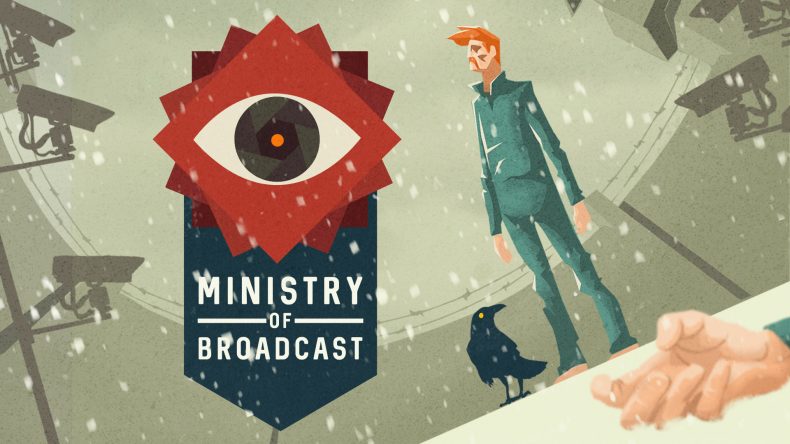 The police state of George Orwell’s 1984 has motivated countless pieces of fiction. For books, movies and video games, the idea of an all powerful government destroying all privacy and freedom presents an interesting backdrop for all manner stories. Whether it’s spying on tenants in Beholder, or guarding the border in Papers Please, Orwell’s inspiration can be felt throughout gaming. Ministry of Broadcast looks to follow in these footsteps, while also adding an unusual comedy twist.

Your protagonist is a contestant in a very dangerous reality TV show, with the aim of overcoming the competition and reuniting with his wife. The show is made up of arenas, and each Arena will see you take on a series of brutal puzzles and obstacles to progress through to the next round. Packed full of contestants playing the role of police, it’ll take all your cunning and the sacrifice of the lives of others to survive. You’d think that this combination of 1984 and The Running Man would make for quite the harrowing tale, but the whole situation your character finds himself in is played for laughs. Police brutality and murder is just a sarcastic joke to Ministry of Broadcast. You’ll often find yourself dropping a civilian onto spikes so you can progress by walking on their body, as your ginger haired contestant casually drops a one liner. You’re also followed throughout your journey by a talking crow, who seems to delight in mocking your failures and deaths. When the game finally tries to have a serious moment, it’s not particularly easy to adjust.

I suppose I’d call Ministry of Broadcast a puzzle platformer, but the movement isn’t the fluid running and jumping you might expect. Moving the protagonist around is a slow and rigid process, with no control over jumping once you leave the ground. When speed is of the essence, using your platforming abilities to get from point A to B isn’t easy, and restarting back at checkpoint does get frustrating. It’s more Oddworld than Super Mario Bros, but the pacing does lend itself to the problem solving you’ll find throughout.

Finding the solution to a puzzle is rarely simple and even less likely to be obvious. When presented with a room full of switches and people, it’s usually best to just started pulling levers and see what happens. Leading the police or their dogs to attack civilians as a distraction is often the path to victory, but with lifts, boxes and locked doors separating them it’s easier said than done. There were multiple rooms that had me stumped for a significant amount of time, but with enough trial and error I was always able to find my way into the next reality show arena eventually, and enjoyed myself doing it. Between stages you’ll spend time being briefed by government officials, and listening in on the conversations of the other contestants. None of the other players are very fond of the protagonist, as he’s the only one not assigned the role of civilian or police. You get a lot of snide words from them all, especially your bunk mate Joe. Given how many of the contestants you end up killing to progress in this dystopian world, it’s hard to blame them.

The Orwellian setting is designed to perfection. From the industrial environments, to the sinister posters that let you know you’re being watched, it’s all very oppressive. Despite this, I can’t help but wonder if the world would be better suited to a game with a less comedic story. It almost feels wasted on the sarcastic quips and ginger jokes presented here.

Ministry of Broadcast is a mashup of great concepts that never quite manages to bring them together. The puzzles are an enjoyable exercise in trial and error, and the setting is delightfully dystopian – but the comedy elements only serve to detract from the overall experience.

An odd combination of George Orwell's 1984, puzzle platforming and comedy, which doesn't blend as well as you'd hope. As good as the setting is, it doesn't make up for the rigid platforming or out of place jokes.