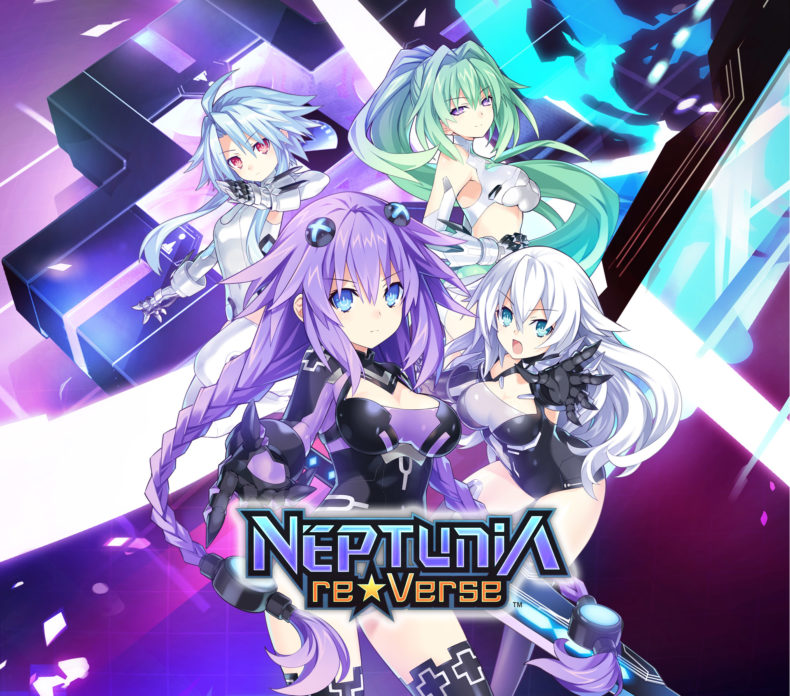 Whenever an exclusive is released on a console, there’s a lot of extra attention given to it. In a world where people draw juvenile tribal lines around their favourite electronic box, games others can’t play are the weapons of choice. That isn’t to say that the exclusives themselves aren’t exciting though. Sony especially has a great track record of publishing exceptional games that only PlayStation owners can play. Not all exclusives are created equal though, and that’s especially true for Neptunia ReVerse.

In the world of the Gameindustri, the Console Wars are more than just endless arguments on gaming forums. This endless battle sees the four goddesses fighting endlessly for their nations, hoping to rule over the entire planet. These goddesses and nations aren’t just differently themed worlds though: each of them not so subtly represents a different gaming company. It’s completely bizarre, but you’ll soon get used to which scantily clad child is supposed to represent Sony, Nintendo or SEGA. 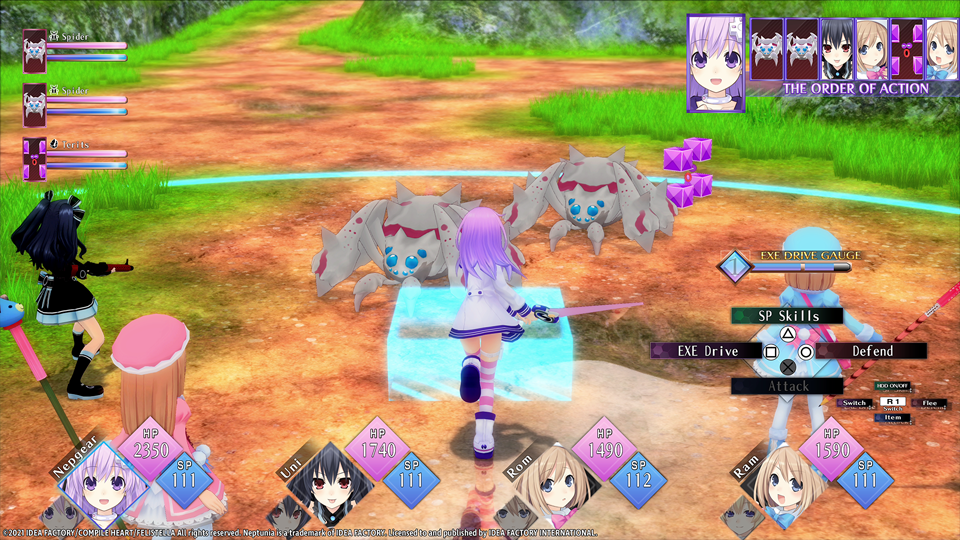 Our heroine Neptune loses her powers at the start of the game thanks to a new threat to the world, and thus begins a classic amnesia fuelled adventure through the nations of Gameindustri. Neptunia ReVerse is a remaster of the first game in the long running series (well technically a remaster of a remake) so no prior knowledge will be required to get stuck in. The story itself is passable, but the characters and fan service very much aren’t.

It takes less than a minute to mention a character’s oversized breasts. Within five there’s a scene where one girl undresses another to heal her. It feels like every other line is some stomach-churning reference to boobs. It aims to appeal to pubescent teens, and to say it grates would be an understatement.

Outside of the horrendous “fan service”, combat is actually decent. Each turn you can move a character around the 3d battlefield, and use attacks or special abilities on enemies in range. Each character has a different area their attacks hit. You’ll want to fit as many foes in the glowing shape as possible. 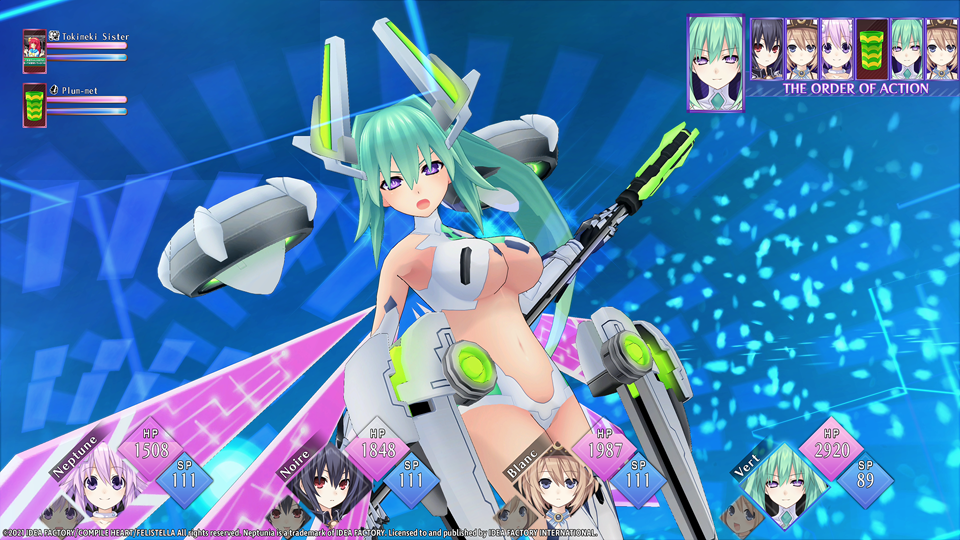 Perhaps the best part of battles are the combo skills, which you use every time you do a basic attack. You set these up using your CP in the menus. Then you attack using whatever combination of rush, power or break attacks the situation calls for. Neptunia ReVerse isn’t an easy game either. You’ll need to figure out when it’s worth breaking an enemy’s guard or going in for the kill. You may need to use a character’s HDD transformation if you want to survive.

When you’re not actively battering baddies, exploring the dungeons is very simple. There are no random encounters, and enemies roam the fields and caves waiting for you to approach. If you’re careful and can swing at them before they charge at you, you’ll also get the standard advantage going into a fight. Each maze of an area also has plenty of secrets to uncover, and by pressing Square you can reveal any nearby hidden objects.

If rewards are what you’re seeking, there’s a decent amount of side questing to dive into in Neptunia ReVerse. The guild offers plenty of side quests to complete, that range from gathering items to fighting hard-as-nails boss monsters. It’s nothing revolutionary, but the quests are worth completing for the materials you need for your Plans. 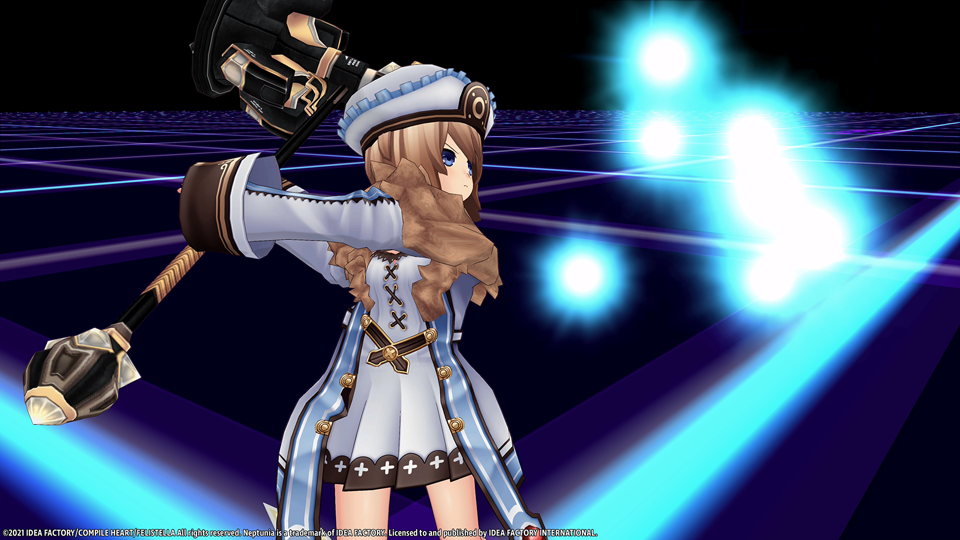 As long as you have the right materials and enough MB, you’ll be able to use all sorts of Plans. Plans can be used modify the toughness of enemies, change items in a dungeon, or even create cute outfits for a character. You can also create cartridges and disks to power up your characters, in keeping with the outlandish theme of the game.

New for this version (alongside some decent upgraded graphics) is the Arrange Mode. This mode is for series veterans only, and unlocks every character and a few mechanics from the very start of the game. It’s a nice extra feature, but probably not enough to bring back someone who’s played the game before.

Neptunia ReVerse is a decent RPG at its core, but its obsession with softcore nudity is just painful. The combat is fun and the updated graphics are fine. But listening to characters berate each other about cup- sizes was one of the worst experiences I’ve had in a game. If you’re desperate for a JRPG and have high tolerance for awful dialogue you might enjoy Neptunia ReVerse. For everyone else, this isn’t the exclusive you’re looking for.

Neptunia ReVerse has enjoyable combat and engaging RPG systems, but it's not worth enduring the "fan service" to experience them.