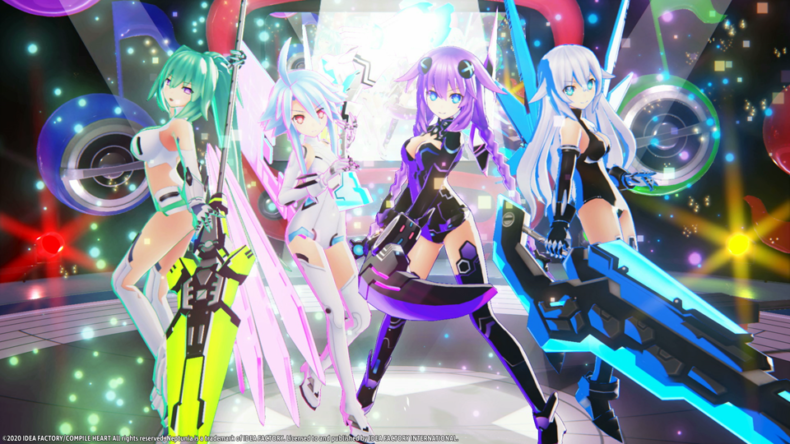 It’s tough to even begin to explain the premise of the Neptunia games. The series protagonists are based on video game companies, and the games take place in a world called Gamindustri. With CPUs worshipped as goddesses and a hefty dose of “fan service”, these JRPGs have turned heads since their PS3 debut. Not content with parodying gaming as a whole, the Neptunia girls are back in a dimension crossing adventure with Neptunia Virtual Stars.

It’s a quiet day in Gamindustri, and our favourite console based heroines (series favourites Neptune, Noire, Vert and Blanc) are attending a convention to try out the latest video games. After their attention is grabbed by a snazzy looking VR booth, the girls are summoned to a universe in peril by an angelic figure and the adventure begins.

This new world of Virtualand you find yourself in is built on a foundation of Content. Without this Content from creators the land will crumble, and thanks to an influx of nasty creatures called Antis this is happening at an alarming rate. Neptune and the gang have fought many battles before, but have no experience in content creation – and so will need the help of Vtubers. 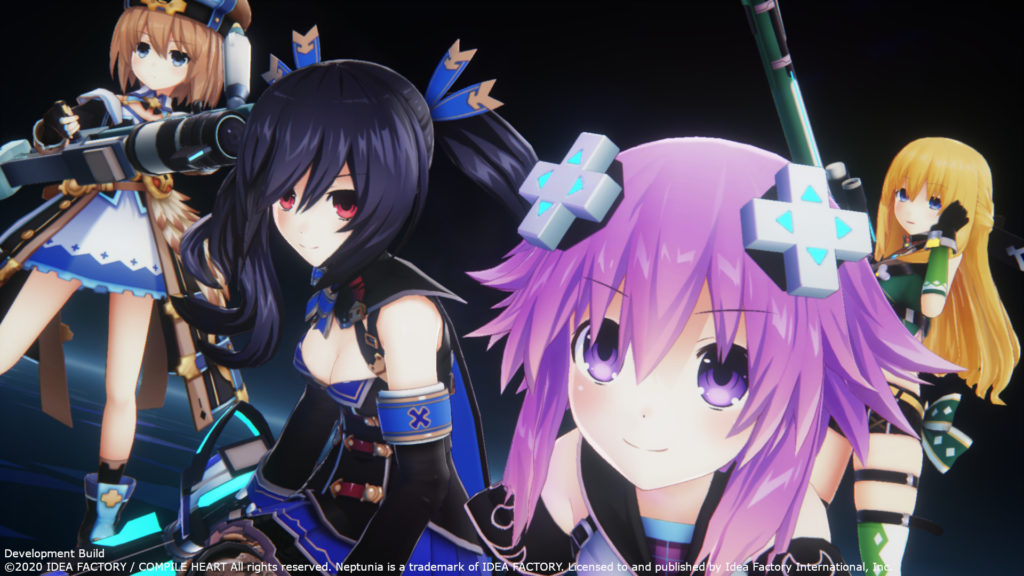 I was unfamiliar with the concept of a Vtuber until they were mentioned in Neptunia Virtual Stars, and apparently I’ve been missing out on a whole branch of online entertainment. Vtubers, or Virtual Youtubers, use digital characters to present online content (think Hatsune Miku crossed with PewDiePie). There are actually real world VTubers in the game, in loading screens and as special attacks, and it’s all quite overwhelming if you’re unfamiliar with the concept. Alongside the Neptunia girls, two Vtubers (confusingly named Me and You) are summoned to Virtualand and will help you on your quest. The story is particularly hard to follow and mostly nonsense, but entertaining nonsense.

Ridding the world of Antis won’t be easy, but you’ve got plenty of characters on your side to fight these online foes. The four series staples take down enemies with guns, in the style of a third person shooter. Each of the girls has a different weapon and special abilities, and can be switched between at will depending on the situation. From machine guns to charge shots, gliding around and blasting baddies is rather entertaining. 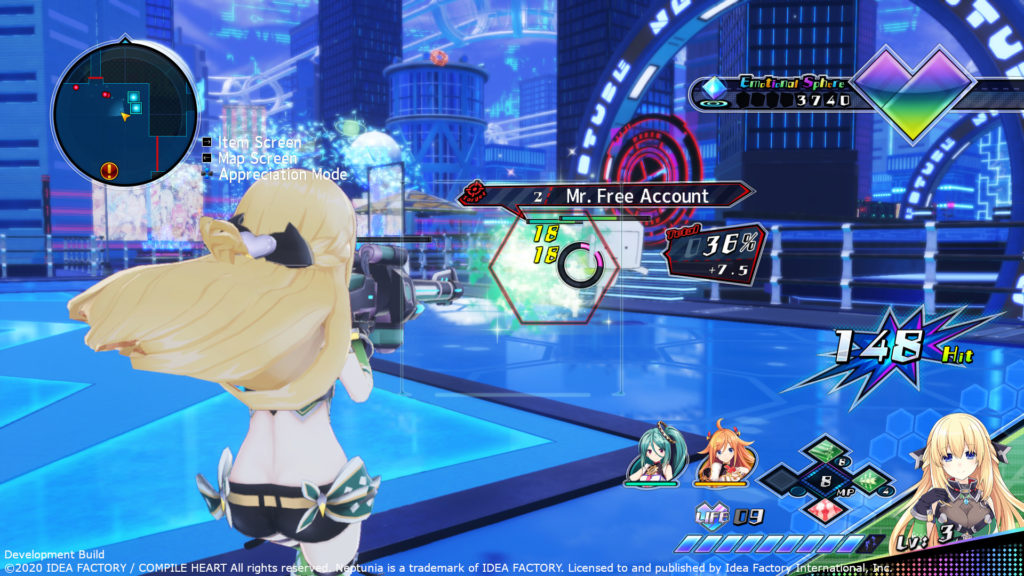 As well as the four main characters, you can also play as the pair of Vtubers. When controlling Me and You combat is reminiscent of a character action game, with melee weapons, ranged attacks and a lock on system. It isn’t really as enjoyable as the faster paced blasting gameplay, and when enemies require you to play as Vtubers to do extra damage I rarely appreciated it.

The online content backdrop to Neptunia Virtual Stars is by far the most interesting part of the game. Each world that needs saving represents a different genre of online content, from eating videos to literary reviews. Bouncing from Macaron to Macaron to free Cookunia from the Antis was a delight, and listening to viewers enjoying the content once free of their grasp is satisfying.

The enemies themselves steal the show. Antis all represent different negative aspects of the Internet. The most basic enemy is known as Mr. Free Account, and it only gets better from there. There are LOL Worms, Fakebooks and Troll Accounts that must all be purged from Virtualand, as well as huge bosses that require beating in weird music based battles where you do more damage during the chorus. 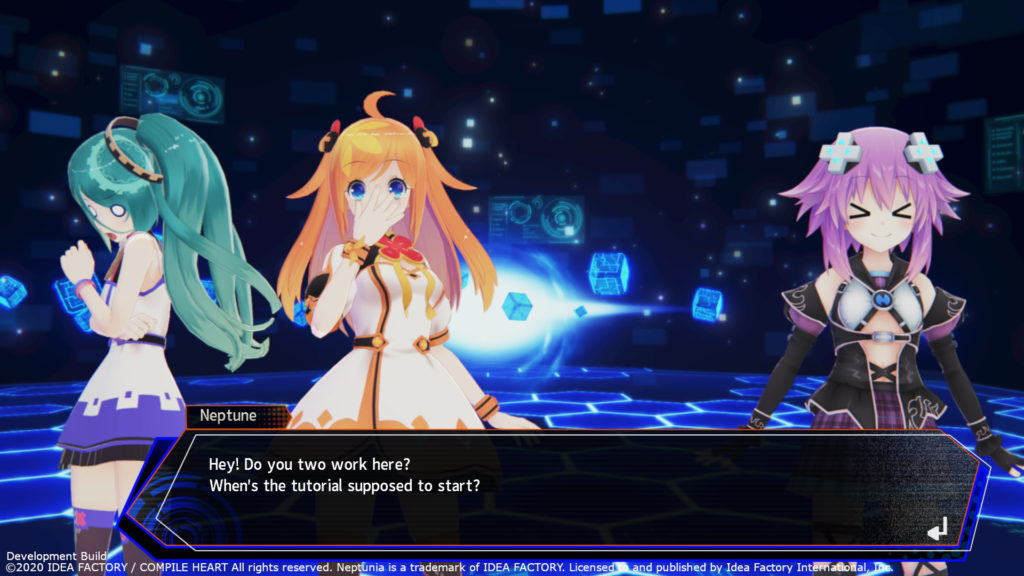 There are all the complex JRPG systems in place that you’d expect in Neptunia Virtual Stars. There’s equipment made from the memories of saved Vtubers, stores you can open between chapters, and numerous types of special attack each more complicated than the last (and each apparently requiring a skimpier outfit than the last). While it’s fun to invest in all these systems, the difficulty is rarely tough enough for you to need to do more than aim and shoot.

The amount of “fan service” in Neptunia Virtual Stars is pretty disappointing. There’s a distinct lack of clothing from its practically all-female cast, with obtainable outfits such as the particularly gross “Secret Maid Bikini”. There’s also constant belittling of “younger looking” characters for not having large enough breasts, which, although I expected it, still wasn’t pleasant to see.

Neptunia Virtual Stars is an enjoyable JRPG with a great setting and virtual world concept. If you don’t mind that the story is unintelligible and some particularly gross sexualisation, you’ll find this to be one of the more entertaining entries in the series.

If you can get past its confusing story, Neptunia Virtual Stars has a great setting and decent combat that fans of the series will enjoy.