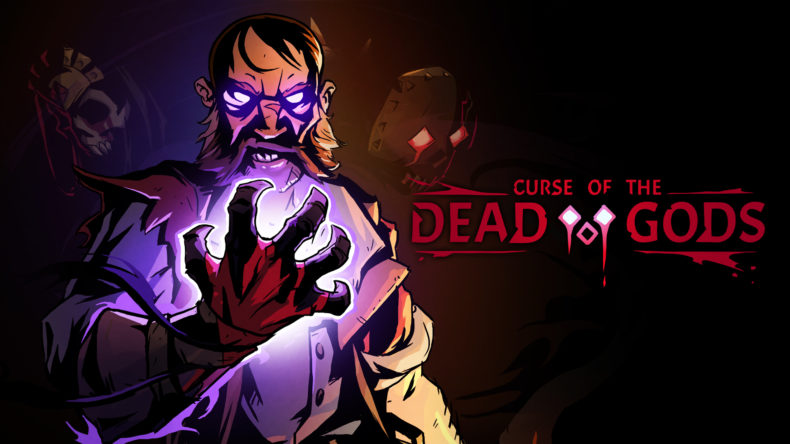 Ideally, you want to avoid curses, not just in video games but in all walks of life. Entropy is generally considered a bad thing for a reason, and barrelling headlong from one hex to another is going to do you a mischief. So spare a thought for Caradog McCallister, grizzled protagonist of Passtech’s Curse of the Dead Gods, who is locked in a perpetual nightmare of violence, traps, and lots and lots of curses.

Stumbling into an ancient jungle tomb, our hero finds himself stuck traversing three temples filled with undead horrors and presided over by tribal gods called Champions. Your task is to guide him through deadly traps and desperate fights, unlocking new skills and items as you go. 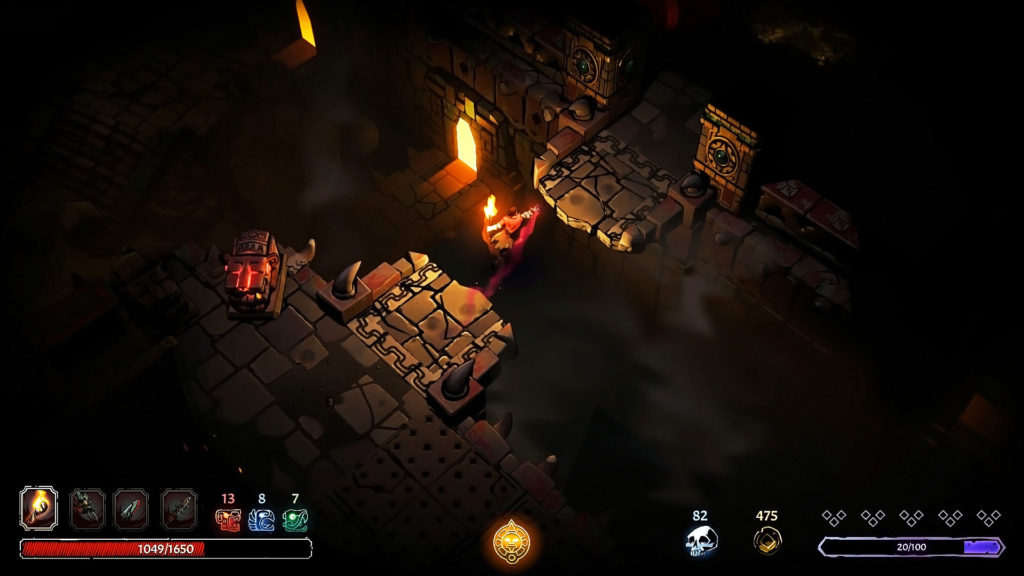 As it’s a roguelike, you’ll spend a lot of time dying, which will spirit you back to the entrance to the temples. There are three temples to choose from from which decide your path: Eagle, Serpent and Jaguar. Each has a different aesthetic and enemy types, as well as varying pitfalls. Every run is procedurally generated, and you’ll carve a path from entrance to boss fight by battling through a series of rooms, each containing a new boon. Whether it’s a healing fountain, weapon upgrade or stat boost, everything is worth battling towards.

You’ll collect blue skulls and green rings as you go, which you’ll keep when you die. The rings allow you to unlock new weapons that will roll into the randomised temple loot, while the skulls give you permanent, equippable buffs or boost your starting chances, either with a better weapon selection, buffs or improved stats. It’s a brilliant system, crucially giving you a sense of progression even when you’re dying, in a similar fashion to Hades.

There’s a huge selection of weapons; primary, secondary, ranged and two-handed, which you can mix up in combos and use alongside timed parries and perfect evasions to defeat your foes. Swords, pistols, whips, claws, hammers, bows, spears, axes, maces and shields can all be found and mixed and matched as you go, with new ones dropping from enemies or turning up in chests. Different relics and upgrades afford further buffs and benefits such as increased damage or movement speed, or a higher chance to find gold or gear. Traps can even be turned against your attackers if you’re quick and clever enough. 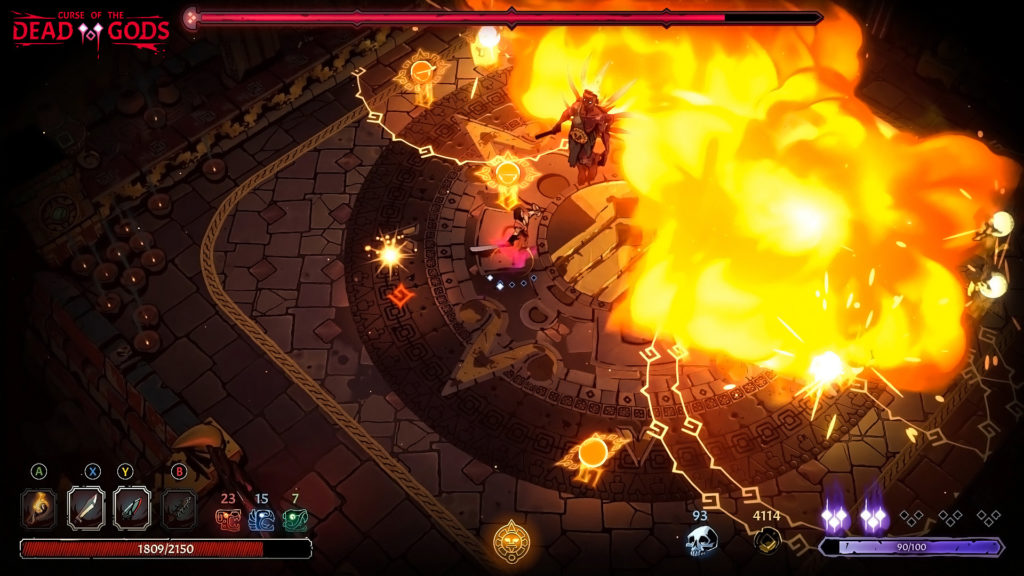 The combat is slick and responsive, but it’s easy to become overwhelmed and you will often live or die based purely on your loadout. Chaining attacks and parrying or evading with pinpoint timing are essential, as is fighting in the light where possible. Hitting a certain button at any time will pull out your torch, allowing you to light up rooms as you go. Certain buffs will cause you to take less damage in the light, or you can always set your enemies alight which will cause them to ignite others or set off combustible traps. You’re a pretty tough customer and can weather an impressive amount of damage before you die, but curatives and healing fountains are super rare. Upgrades also cost either hard-won gold, your own blood, or your purity, and force you to weigh up every decision.

Perhaps the coolest aspect of Curse of the Dead Gods is the Curse system itself. When I previewed the game in PC early access a while ago, these were fairly limited, but now there appears to be dozens of them, separated into five categories. Every time you cross into a new room, take damage from certain enemy types, or pay for an upgrade or weapon with blood, you’ll receive corruption. Receive enough and you’ll be cursed, and this can happen up to five times per run. 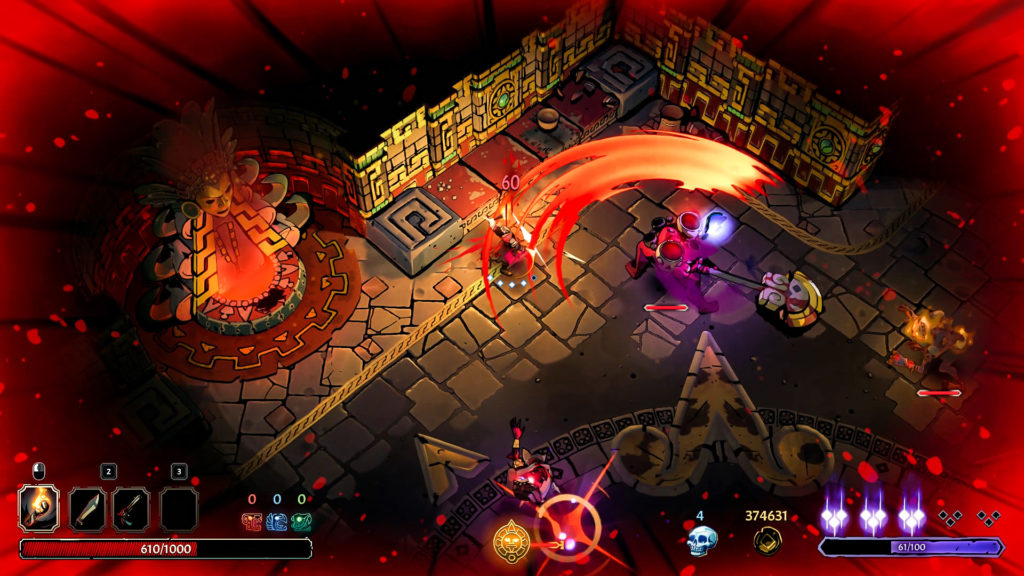 The nature of these Curses is what makes them so interesting and changeable. For example, one causes you to become intangible when you dodge roll, avoiding all damage, but preventing a perfect dodge from refilling your stamina. Maybe you’ll pick up more gold, but the gold will also increase your Curse meter. One Curse hides your HUD when you take damage, another makes traps invisible unless you have your torch drawn. The list goes on, and because of the random nature of your afflictions, every run feels massively different to the last. The campaign doesn’t have anywhere near Hades’ incredible storytelling, but it makes up for it with so much variety in the gameplay.

Being able to equip relics and upgrades on the fly as and when you find them allows a certain amount of adaptability, and though it’s heavily ranged against you, combat rarely feels unfair. You always have something to work towards, too, so it never feels like you’re just going through the motions. Some enemies are real gits though; some can corrupt you, some will dive at you, others will feint to force you to hit parry too early, or else hit you with corruption instead of physical damage. The bosses, too, are tough, requiring you to watch their movesets and learn when to attack and when to simply avoid them.

Aesthetically it’s a pretty game considering how much of it is set in dark, dank crypts. Environments reuse assets but they’re detailed and well-drawn, and it runs at a slick pace whether on PC, Xbox or Nintendo Switch. That said, the Switch version has the roughest graphics as usual, but also suffers in handheld mode because there’s no way to embiggen the HUD or text elements. Some people will almost certainly struggle with this and it’s something that should feature in any Switch port these days.

That aside, Curse of the Dead Gods is an excellent rogue-like. The massive variety of curses, weapons and buffs create a different experience each time, and the difficulty is balanced just on the right side of challenging, meaning that cautious play and leaning into the Curses where possible is often the soundest strategy. I had a feeling when I first previewed this that it could easily become my new obsession once it hit home consoles, and I’ve never been so happy to be right.

Not much story
Text is small on Switch version

Curse of the Dead Gods is an excellent rogue-like, and the massive variety of curses, weapons and buffs creates a different experience each time.

You may also like
Curse of the Dead GodsFocus Home Interactive