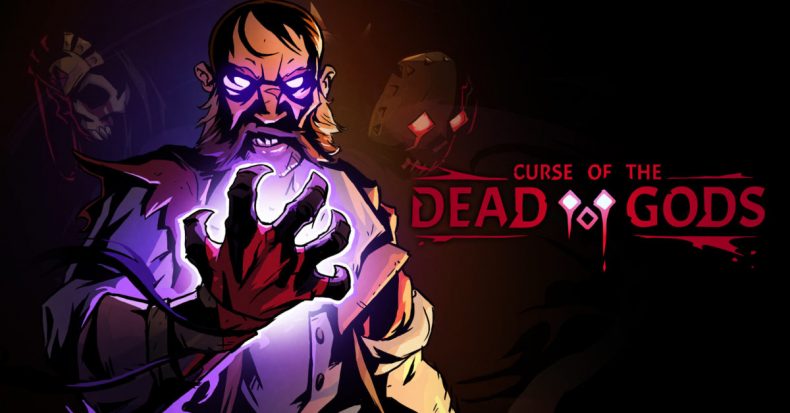 You have to wonder sometimes why a game goes into early access at all. Why can’t we just have good, old-fashioned demos like we used to get, stacked on CDs and celotaped to the front of a gaming mag? Sometimes I can see the use in early access; for balancing online games, for example, or chasing bugs out of a prospective live service offering. But with a game like Curse of the Dead Gods I can’t see the value in it beyond marketing, because this new isometric roguelite from Passtech and Focus Home Interactive feels every bit like a finished game that’s missing some content.

Like a cross between Dead Cells and Hades, Curse sees your moustachioed explorer delving into ancient temples and navigating a series of rooms filled with more traps and dangers than an online dating app, to defeat the champion at the end and reap the treasures. Fluid combat, beautiful lighting, a variety of weapons and abilities and an abundance of things to seek out and collect combine to produce an incredibly satisfying experience even in this “early access build”, and despite only featuring six enemy types at this point, I haven’t found myself getting bored yet. A variety of melee, ranged and two-handed weapons (bows and spears, for example), as well as shields and guns, give you plenty of options to mix and match your loadout in a similar fashion to Dead Cells. Curse of the Dead Gods has a super satisfying loop of risk and reward. As in Slay the Spire you get to pick your route through each temple. Presently only one is available, the Jaguar Temple, but there are three others in progress, including the Serpent Temple. You begin by picking your exploration type, from short, medium, long and hard, and then you select the path you’ll take, navigating by need. A map shows what to expect in each subsequent room, whether it’s a new weapon (there’s currently an impressive 45 to find), a stat increase, a hoard of gold, a blood fountain (which is your only real option to heal), or a relic that can imbue you with a buff that lasts until you die.

Death drops you back at the temple entrance, where you can spend collected blue skulls to unlock Blessings, which are modifiers that apply certain boons like a 3000-gold starting kitty, or reduced damage from fire. The old black gum stuck to the bottom of that particular shoe is the Curse meter. A purple bar in the bottom corner fills up when you take damage, spend too long in the dark or traverse between rooms, and when it caps you’ll be back stowed with one of 14 curses up to a maximum of five. There a few pretty creative debuffs here, too, such as one that increases the gold on the ground but makes it all disappear after a few seconds, or one that turns you to smoke during an evade roll to disorient you.

Blood is as much a currency as gold in Curse of the Dead Gods, as you can opt to use your precious hp to buy upgrades and weapons, but to refill your health you’ll need to also fill your Curse meter. It all adds up to create a dastardly balance between risk and reward, and the procedural nature of each temple and the available buffs and curses contained within mean you’ll always be facing new challenges at new disadvantages.

It also looks gorgeous, by the way. The protagonist’s torch casting shadows across the walls that flicker and move like lurking beasts, and the bold, cel-shaded visuals evoke dungeon crawlers like Torchlight. The only thing that indicates Curse of the Dead Gods is unfinished is its lack of content overall. I can’t remember a single bug, spotted no issues with performance, and don’t feel anything even needs to be re-balanced. I’m not saying it’s perfect, exactly, but there doesn’t seem to be much actual work left to do on the gameplay. I’d like to see some skins and cosmetics added, but that’s a preferential thing. Passtech have promised more temples, bosses, weapons, curses, blessings and enemies, so to say I’m excited about getting my hands on the finished product is an understatement. In fact, come its full release, Curse of the Dead Gods might well become my next obsession.

Senior Content Editor Mick has been playing games for over 30 years and writing about them for around 12. After drifting from site to site for a while, settling briefly at the now-defunct Made2Game and freelancing for the gone-but-not-forgotten NintendoGamer Magazine, he came at last to rest at Godisageek. Mick has been a reviewer, staff writer and content editor here for some time, while also moonlighting a little for Red Bull Games. He has 4 kids, has written 2 novels, and sometimes even manages to pay a bill or two. You'll usually find him defending the galaxy in Destiny 2, battling evil in Diablo 3, or lurking in the background on Twitter. Find him there @Jedi_Beats_Tank, or on XBL (JediWaster247), PSN (Jedi_Waster) or Nintendo (JediWaster).
MORE LIKE THIS
Curse of the Dead GodsEarly AccessFocus Home Interactive