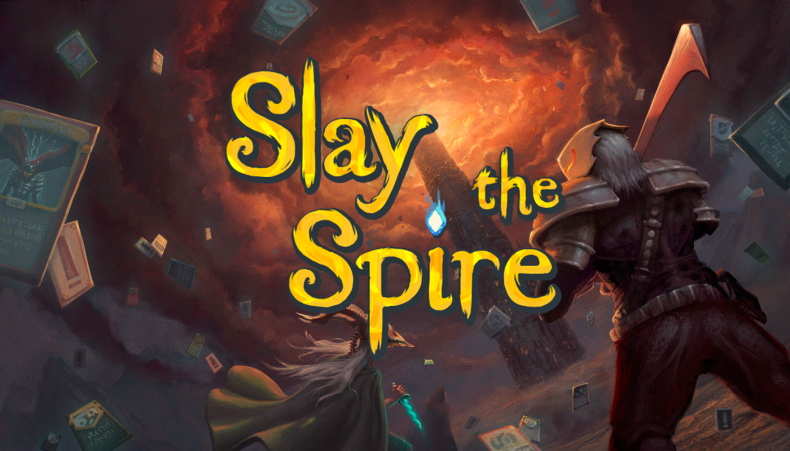 I’m not much of a card player. I suck at Gin Rummy, have no poker face and lack the patience for Patience. In the digital realm I could never get fully into Hearthstone or Gwent, although I usually come somewhere near the top of the board when playing Solitaire. But I fell head over heels with Slay the Spire in just a few rounds. It combines deck-building with turn-based combat, and features some incredible off-the-wall enemy design and a fantastic rogue-like progression system.

You begin as the Ironclad, a Knight with a cruel-looking sword who faces off against enemies with a series of offensive melee and defensive cards. Each round you’ll shuffle a hand from your deck, and will expend 3 action points to play up to 3 cards (some cost 2 or 3 points alone). They might be as simple as a straight up attack, but after each victory you’ll be able to choose from a small selection of new additions. Some cards even have effects you don’t expect, and you can find yourself cursed to take damage at the end of every round, or buffed so you regain HP instead. The Ironclad specialises in heavy-hitting cards like Bash, which can render the enemy “vulnerable” to direct damage in the next round, and “Cleave” that hits all the enemies for a set amount of HP. Enemies, on the other hand, don’t play cards. Instead they use their turns to buff themselves, and debuff or attack you. On your first few runs, you won’t know any of the tells, but as with any good rogue-like the more you try and fail, the better you’ll get. Enemies all have little ticks and tells that reveal their next move and allow you to plan accordingly – although whether you can act on that plan depends on your deck. The enemy designs are excellent too. Most of them look like the designers sketched them on the back of a beer mat, which is way more endearing than it sounds, and there are references to various games and movies thrown in to tickle your funny bones.

The second playable character, The Silent, and the third, The Defect, have skills and abilities in their potential decks that completely change the way you play. For example, The Silent is less damage-focused than the Ironclad, and is much better at debuffing the enemy and applying damage-over-time effects like poison. The fact that everything is random in every run means there is an element of luck involved, and so on certain runs you may feel  that the odds are stacked against you; but conversely this can also work in your favour, and some runs will seem much more forgiving than others. Each run is a new experience, as enemies are randomised every time you die in your attempt to reach the final boss at the top of the titular Spire. As you climb you’ll rest at campfires where you can either replenish some health or upgrade your cards to be more effective, and there are artefacts called Relics which can affect your decks or your health and offer varying buffs that stay with you for the duration of the run and beyond. Each of the three protagonists can find and utilise different relics, but you’ll retain them on death, giving you more of an advantage with each fresh start.

It’s also a major boon that any run, even if you make it to the final challenge at the top of the Spire, can be completed well inside an hour. So even though you’re constantly starting again, you’re always earning more experience, learning new tricks, and bringing back new tools to use in the next attempt. There’s something intrinsically fun about not knowing what’s coming, and that’s in part because Slay the Spire never frustrates or antagonises you. Relics, potions and special Elite enemies are scattered all over the map, and so every foray feels like its own mini adventure. There are certain enemies you may grow to hate just a little bit, but you’ll also learn the best ways to deal with them as well. It’s hard to quantify exactly why Slay the Spire is so much fun, but I think a great deal of the appeal is in learning from your failures. There’s something almost Soulsy or Dead Cellsy about the way the game expects you to fail, and then simultaneously punishes and rewards you for it. At first you’ll spend round after round screwing up or scraping through, but the nuances of the game will slowly begin to rub off on you. I went in almost entirely blind and floundered around with guess work and random selection for a while, but I sound found myself experimenting with specific cards, responding to the enemy and thus automatically playing more tactically.

The difficulty never feels unfair, and if you can accept the art style for what it is and push through the tough early runs, Slay the Spire is a hugely enjoyable single-player deck-builder that feels genuinely unique in its genre.

Mick Fraser: "Slay the Spire is a hugely enjoyable single-player deck-builder that feels genuinely unique in its genre."