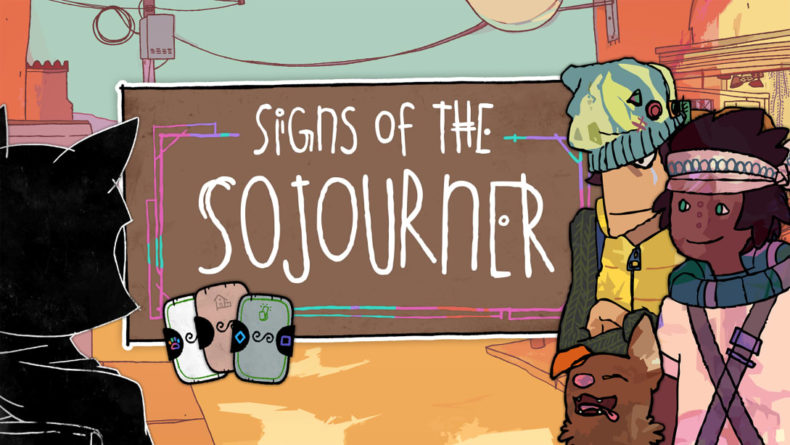 There’s not much that makes me happier than the increasing popularity of deck-building video games. I’ve spent countless hours refining my skills at Slay the Spire and Nowhere Prophet, and the combination of card game and Roguelike randomness has kept me entertained throughout. When I think of deck-building games, I usually think of collecting attacks and creatures to battle my way to a boss. Signs of the Sojourner mixes up this tried and tested formula, replacing swords and orcs with conversations and shopkeeping.

In the small desert town of Bartow, the recent death of your mother has landed you in charge of the family shop. With the help of your childhood friend Elias, it’s up to you to stock it with goods from across the land and keep business booming. Each month will see you travelling across the land, making connections with the delightful inhabitants of the harsh lands to ensure you keep your mum’s legacy alive. 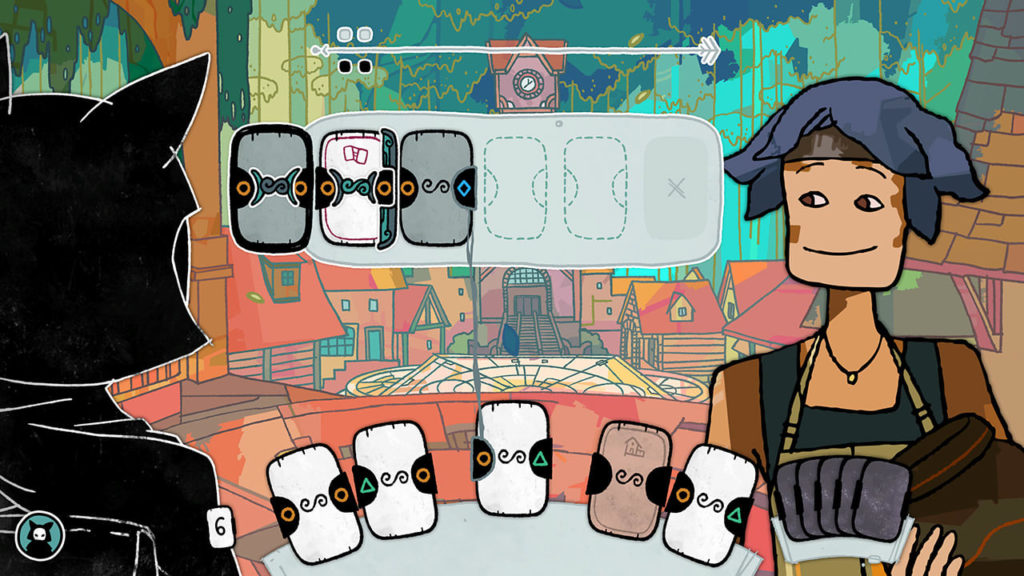 You’re made aware almost immediately that without the influence of your mother, the caravan that brings supplies to Bartow is thinking about skipping the settlement unless you’re able to thrive in your new position. As you travel the roads and meet old contacts, you’ll learn that your recently deceased parent had a few secrets and that there are some less than savory influencers trying to undo her hard work.

Signs of the Sojourner is all about making connections. Having positive conversations is the only way you’ll maintain a successful business, and this is where the cards come in. Parts of a conversation are represented by cards bearing different symbols, and you and your potential friend take turns trying to play cards that match the last one played. They’re sort of like dominos, and like those old bones need to be arranged in a line with matching symbols. These symbols represent a way of conversing (such as empathetic and observant or logical and diplomatic) and each character has their own preferences. Like all good social interactions, you need to keep in mind what the other person might want to talk about and say next. 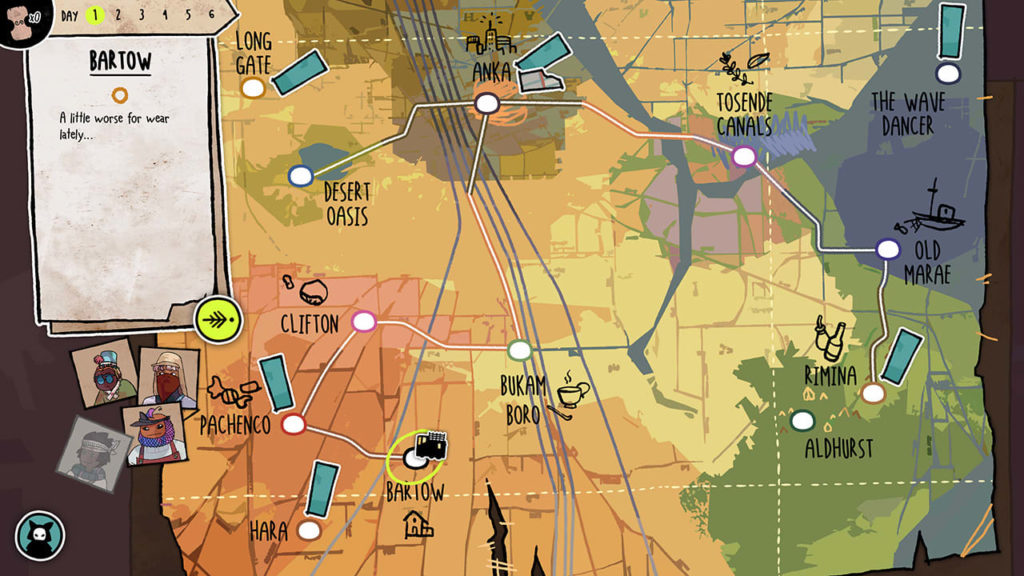 Signs of the Sojourner gets more complex than dominos pretty quickly, with cards with special abilities meaning you can connect easier with your new acquaintances. Some reveal the hand of the person you’re talking to, some can slot into earlier parts of the card chain, and some allow you to play another card instantly. My favourite of these is the Accommodate card, which copies the last card played and is helpful in a ton of situations. After every conversation you’ll be forced to swap a card in your deck with one the other person used, and it’s important to keep your deck full of the right symbols for new social opportunities.

Although you’re never explicitly punished for failing to connect with someone, there are all sorts of rewards you’ll get for a successful conversation. The most important of these are supplies for the store, but you’ll also learn about new settlements to visit and new routes between them.

There are only a limited amount of days in a month, so you’ll need to make some pretty big decisions about where you’ll spend your time. You’re initially advised to follow the caravan to impress them, but are free to go off the beaten path in search of secrets and supplies. If you spend too long on the road you’ll have a useless fatigue card put into your deck, so as reach the end of the month you’ll have a significantly tougher time making friends and gaining supplies. The fatigue cards really limit your options, and it can be pretty frustrating when you fail due to having a hand full of them. 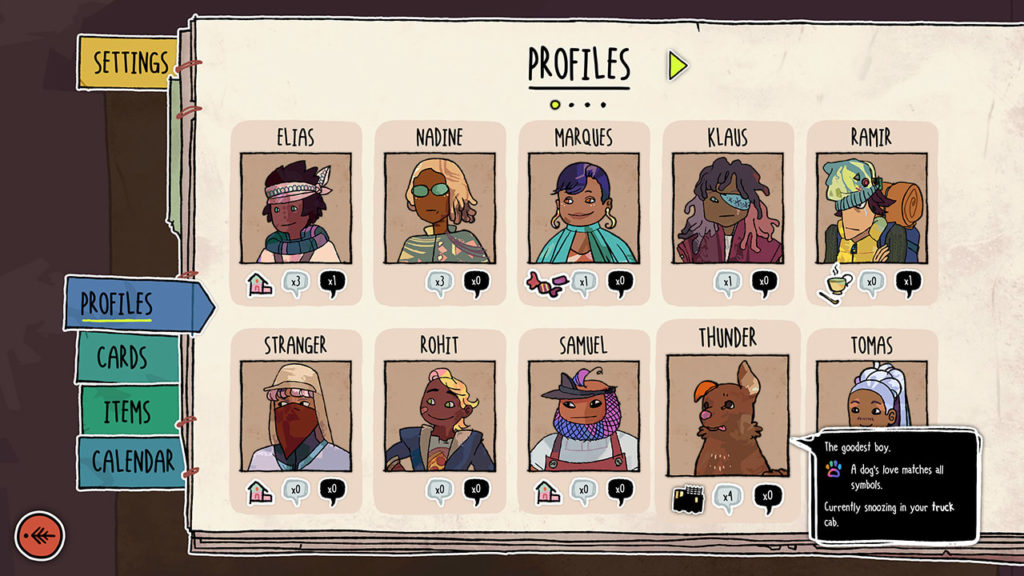 One of my favourite aspects of Signs of the Sojourner is how well it blends the gameplay mechanics with the story and characters. In later months events in the desert spread unease among its inhabitants, and this makes it harder to connect with them due to the panic cards that previously weren’t in their deck. On the more positive side of life in the barren wastes, you make friends with a dog early in the game who is just adorable. Interacting with him can remove fatigue from your deck, and his symbols cleverly match up with anything because dogs love everybody.

After 5 months the caravan makes its decision and you’ll get your ending. It only takes about two hours to finish the game, but playing well enough to unlock Signs of the Sojourner’s various endings will take you much longer. There are some truly lovely finales to witness, and it’s well worth the replays. 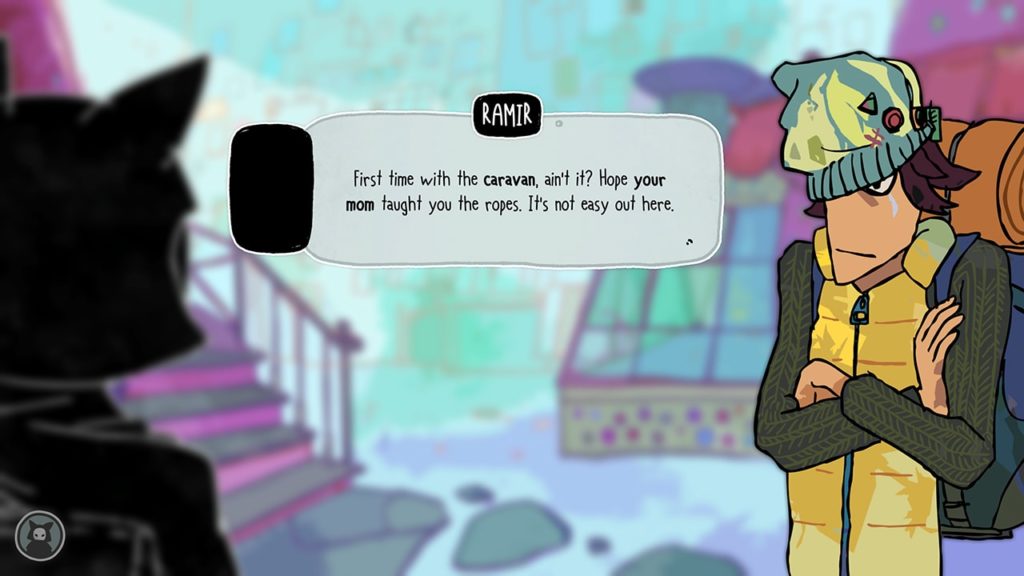 It should also be mentioned just how stylish the visuals and audio of Signs of the Sojourner is. The colourful aesthetic breaths so much life into the world, and the character design is fantastic. It’s rare for desert environments to be so full of charm, so I really appreciated what a treat for the eyes my time exploring the sandy expanses was.

Signs of the Sojourner is a really interesting blend of narrative interactions and card game mechanics. Deck-building is tough but rewarding, and there are plenty of interesting endings to keep you coming back. If your looking for something unique to play, you could do much worse that spending some time in the beautiful desert plains and stocking the shelves of your shop.

Fatigue cards are just too oppressive

A unique combination of conversation gameplay and deck building, Signs of the Sojourner is a truly special game dripping in charm.