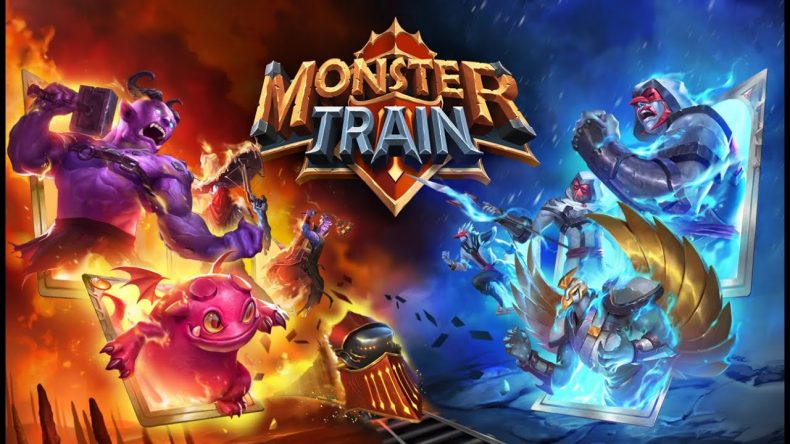 Train journeys are simply not very exciting. Often the monotony of the journey wears you into a lethargic trance-like state as you stare out of the window barely focusing on the meandering hills as they rush by uninterested. Your apathy is only broken by making sure you don’t accidentally touch the leg of the stranger sitting next to you. But this mild drama aside, trains are fairly languid affairs. But if you were to pack the train full of demons, imps and spirits hell-bent on taking a direct route to Hell, and throw in some marauding angels looking to stop you, suddenly the 14:16 to Coventry seems a bit more interesting.

Monster Train takes more than a smidge of inspiration from Slay the Spire, as the roguelike deckbuilding sub-genre grows in popularity. However Monster Train looks to flip the idea on its head as instead of ascending a grand spire, you descend into the depths of the Underworld to reclaim Hell. It all takes place on a train, where your task takes on more of a castle-defense role, as you look to protect your precious Pyre from an onslaught of angels who would look to put it out. If they succeed, Hell’s last chance of thawing is at an end, and your netherworld home is no more. At least, until you retry for another run that is. At your disposal is a selection of minions and spells in the form of cards that you draw from your deck. But it’s not as simple as amassing an army to protect your Pyre, there are the confines of your train to consider too, which literally adds additional layers of gameplay to deal with. Each train has three layers where you can do battle, with your precious Pyre sitting on a fourth layer above. You can place creatures on the left side of the train, whilst attacking angelic enemies appear on the right-hand side. Waves will always appear at the bottom, and then after a round of attacking each other, your enemies ascend the train to the next level. The twist is though that your creatures are rooted to the spot, and so you need to be careful about where you place them for maximum effect.

Initially you’ll start off with a deck of basic spells and creatures, but over time you’ll amass more cards to slot into your deck, as well as artifacts that provide additional boons. Like Slay the Spire, there are different sets of cards to unlock, each with different themes and focuses. It reminded me of Magic: The Gathering where a red Mountain deck plays very differently to a green Forest deck. You can either stick to one deck theme or combine two together to create a hybrid for more variation in your tactics. It adds a great sense of variety and customisation to proceedings as you can tailor how you want to play in many different and satisfying ways. And that’s a good thing, because certainly at the beginning, you’ll be failing a lot in your quest to reverse the freezing over of Hell. Enemies, and particularly the bosses will be too tough for you to deal with initially, but that’s intended. You’ll earn experience for trying, and unlock more and more cards which could form future decks. The better of these are unlocked over time, but drawing them is still random in each run. As such you always feel like you’re progressing in this game, even with failure. But importantly, your success isn’t guaranteed either as sometimes the RNG will not be your friend and your favourite cards simply won’t drop when you need them and it’s back to the drawing board. This keeps you on your toes, and whilst it can be frustrating, it certainly forces you to understand the various card mechanics at play and strategise how best to overcome the current challenge.

There’s a lot to learn too, with various effects and character attributes to consider all at once. The one thing Monster Train is guilty of is throwing you in the deep end. It explains the basic combat mechanics, and how the different levels of the train work, and then shrugs its shoulders and throws you under the bus (or train, perhaps) to figure things out for yourself. It can be daunting, but a quick hover over a card ability or character icon will cause a pop-up explanation, so you never feel too overwhelmed even when new complexities appear for the first time.

Between battles there’s an additional strategy to consider. You’ll be given the option of two routes to take as you descend, each one offering different opportunities to explore before your next encounter. Will you opt to restore some health to your Pyre, or gamble and look to duplicate your favourite card in your deck for better control in the next fight? It works in a similar way to when you choose your ascent path in Slay the Spire, but because you can see the benefits of each route before you make the choice, it feels less random and more tactical. It’s also simpler and keeps you more in control of how your deck evolves rather than being at the hands of RNG, which many players will welcome. Fans of Slay the Spire or indeed other deck-building games will feel right at home here. But it’s also fair to say that Monster Train does bring enough new ideas to the table to offer something new. The enemies advancing up your train require thought to deal with effectively, and the big bosses with obscene health will need clever tactics to overcome. For those that do succeed, you’ll be greeted with another 25 levels of difficulty to contend with. And given that simply beating the standard difficulty is no joke, there’s certainly plenty here for deck-building fans to really dig into and min-max the life out of their decks.

But if that sounds scarily challenging, don’t worry. Whilst it’s true that Monster Train is difficult, it still always feels like you’re progressing even with failure. Simple things like leveling up your chosen decks and unlocking new cards and artifacts give you new tricks to play with after every run. And the playful style of the combat, and overall look and feel of the game, in general, makes failure feel like an encouraging pep-talk rather than a metaphorical brick wall. It’s fun and addictive, with a surprising amount of depth. If only all train rides were this much fun.

Difficult to begin with
RNG can be a killer

Whilst unashamedly similar to Slay the Spire, Monster Train has enough of its own ideas to deliver its own blend of deep, addictive fun.