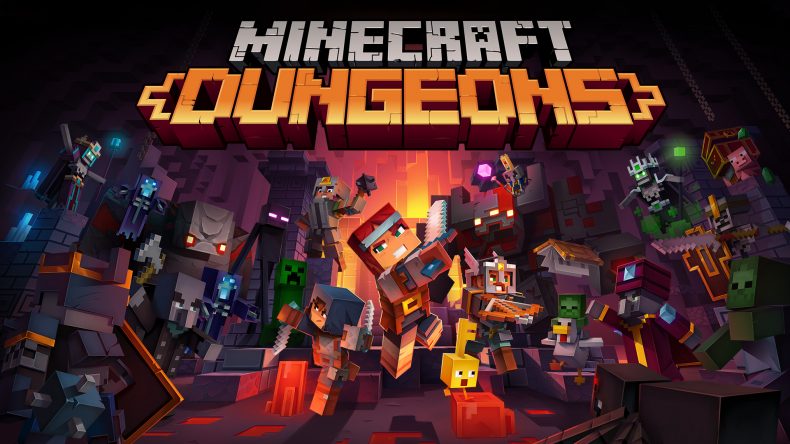 On paper, Minecraft Dungeons is an enticing prospect. An isometric, loot-and-level RPG in the vein of Diablo, but set in Minecraft’s beautiful, blocky world. Imagine scavenging materials from the ground beneath your feet, hewing trees, harvesting blocks to take back to your hub village and craft new armour, weapons and powerful artefacts to take down hordes of zombies, creepers, and Endermen. Imagine putting your knowledge of Minecraft to use, calling on up to ten years of experience in Mojang’s breathtakingly malleable sandbox to save the world from a force more terrifying than the Wither itself.

Now keep imaging, because you get to do almost none of that in Minecraft Dungeons.

To call it rudimentary would be a little unfair, because there is a pretty decent upgrade system at work, and there’s a good assortment of loot to get your hands on, but aside the aesthetic and some of the names, there is nothing that really makes Dungeons stand out as a Minecraft game. In fact, it most reminded me of Riverbond, Cococucumber’s more than competent multiplayer hack-n-slasher from 2019. The story is a simple one, and doesn’t do an awful lot with the internal canon of the source material. A villager has turned evil and unleashed an army of Illagers on the world, and your hero has been chosen for no discernible reason to traverse 9 mission areas to stop him doing whatever it is he’s planning to do. The problem is that I care more about the little villages I throw together in Minecraft’s Creative Mode than I did about this entire world. It may well be fun, but it’s not a world you can really get invested in as you go about your business hacking and slashing through the levels.

Aesthetically, the locales do change mission to mission. There’s a swamp and a desert, some mines, another desert with a temple, a few caves. Very few actual dungeons, notably. You can just charge through a mission and then if you want you can replay it to find the chests you missed. And you’ll probably want to, because the campaign will take you less than five hours for a straight playthrough. Longevity can be gleaned by playing with friends for a while, but unlike other titles of this nature, the lack of real diversity in locales and enemies make everything feel rote very quickly.

I spent the first hour of Minecraft Dungeons grinning like a kid at a fairground as I experimented with armour, weapons, and artefacts, and the Minecraft-iness of it all washed over me, but I soon realised that what I was seeing in that first hour was all I would ever see in Dungeons. There are no decisions to make, no story to latch onto, no NPCs to care about. Even in the hub world between missions, there’s a merchant and blacksmith who equate to a pair of reskinned chests, as all you can do is gamble for items using emeralds you’ve aquired. You can’t buy anything – not even arrows, which is a bit of a shame. What’s most frustrating is that Minecraft is such a rich source for a game like this, and almost none of the potential has been tapped. Yes, there’s some merit in the upgrade system, whereby you earn Enchantment points to unlock a selection of buffs on your melee weapon, bow and armour, allowing for a degree of build diversity – but that diversity doesn’t make all that much difference when there’s more than one of you playing because the lack of a nuanced class system means you might as well just equip the items with the highest number every time. At around the halfway point it suddenly starts throwing higher level gear at you, and then ramps up the monster toughness and you sort of just get on with it.

The bosses consist of large enemies who occupy the middle of the map, spawn mobs and hurl things at you. Your health potion has such a long cooldown that you’ll spend more than half the fight kiting until it refills, and if you run out of ammo and need to kill them with melee attacks, good luck, as most of the bosses can nail you in seconds up close. Level design, too, is basic. It delights in giving you fairly large maps to explore, but likes to fill those maps with dead ends that contain nothing. Sometimes not even enemies, which feels like a waste of time when a simple chest filled with emeralds would do. Ultimately, I think Minecraft Dungeons has made me feel a little disappointed. It’s not that Dungeons is bad – because it’s really not. I enjoyed a lot of what I played, besides the bosses. There are glimmers of good ideas all over it, glinting like dandruff on a fine black coat. There’s simply not enough of it. But perhaps the biggest crime it commits is that, displayed upon the map of this small and contained world is an icon promising not only that more content is coming, but that it will soon be available “to purchase”. It rings as very cynical to me, and I wouldn’t have expected it from Xbox and Mojang.

I will say that Minecraft Dungeons is enjoyable in small doses and will amuse younger gamers for a while. And it has potential, heaps of it, so in a year’s time it may be a very different beast. But I’m afraid that right now I can’t shake the notion that this is a bit of a squandered opportunity that really should have done more with its source material.

Nice aesthetic
Enchantment system has potential
Fun while it lasts

Minecraft Dungeons has heaps of potential, and in a year’s time it may be a very different beast. But right now I can’t shake the notion that this is a squandered opportunity.