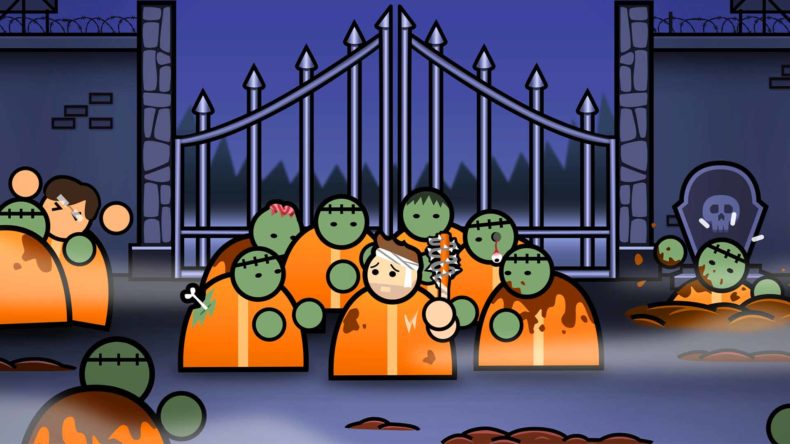 Prison Architect: Undead is a brand new Halloween themed expansion for the management game, and it’s coming on October 11th. It’ll be hitting PC, Xbox One, and PlayStation 4, and it’s a brand new expansion.

This is the second update in as many months, with the “free for all update” just hitting last month as well. Double Eleven says that “The undead are a relentless bunch and can spread quickly through prison populations. Placing a Graveyard Quick Room adds a bit of spooky flair to your compound, but be ready to deal with the Undead hordes it spawns. If you can’t manage the outbreak effectively, your prisoners become infected and increase the size of the horde. Whether you call in extra help from bounty hunters or make use of everything at your disposal as a weapon, do whatever it takes to keep your inmates alive”.

The Undead expansion also introduces the “Undead Overlay” option in Settings, letting players add a layer of darkness and suspense
to the creepy content update.

“Just in time for spooky season, Undead adds a mix of survival and horror to Prison Architect that will put Wardens’ management skills to the test,” says Gaz Wright, Game Director on Prison Architect at Double Eleven. “Grappling with the task of survival is no easy feat, as it introduces an extra layer of complexity and pressure to management gameplay. We hope our community will enjoy Undead just as much as we enjoyed creating it!”

Launching alongside the Undead expansion is The Kickstand, a free update available to all players. This update brings a range of additions and improvements to the game. Two new dogs, Corgis and Siberian Huskies, arrive for some cuddly fun, and three quickrooms expand your prisons: Security, Kennel, and Parole. Additionally, cameras can now be locked and monitors can be made a priority for guards. Courtesy of community feedback, we’ve also added a new empty room that players can use to separate prisons into different sectors without the need to wall them off.