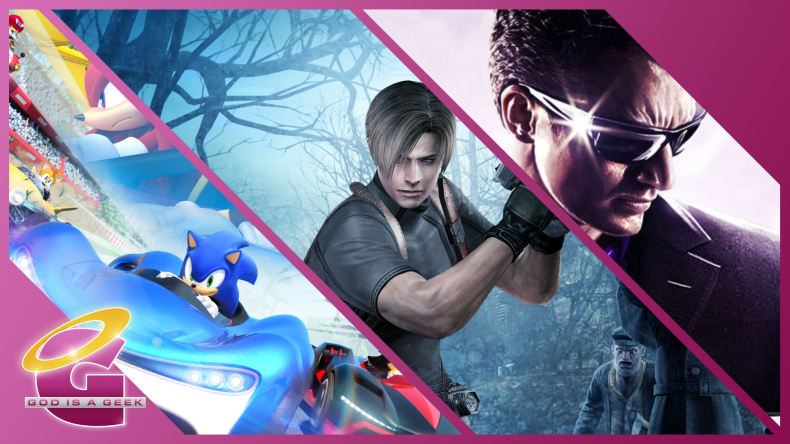 Today’s Switch Re:Port Review looks at a last generation AAA game ported to Switch, the new Sonic racing game, a timeless classic finally going portable, and a point and click adventure that has more humour than touchscreen support. If you’re new to the Switch Re:Port Reviews on the Geek, I (with the help of the fine folk here) look at the Switch ports of games that have been released on other platforms. These reviews aren’t just to talk about the game but to look at how the games run and play on the Switch and how they use the Switch features. Saints Row: The Third is a loud game. On its initial release in 2011, it got its props from being brash and unreserved and unashamed. It’s the sort of game you’d struggle to release these days; something almost deliberately offensive and knowingly crass – but by the old gods and the new, it’s definitely fun.

I could harp on about how porting it to the Switch makes about as much sense as putting paprika chicken in a strawberry blancmange, but at this point with games like Sniper Elite V2 and Blades of Time making their way to Nintendo’s handheld, it would appear we are no longer living in the time of sense and reason. Nintendo seem happy to port an apparently random smorgasbord of last-gen titles to their little wonder-toy and that’s up to them. At this point, why is a fool’s question.

So we have Saints Row: The Third, the story of the fall and rise of the 3rd Street Saints, a former gang whose achievements turned them into a violent, overblown PR cash-cow and even allowed them to slap a corporate logo on their particular brand of mayhem and destruction. Their popularity is so out of control that as the game opens they’re staging a fake bank robbery just to entertain, signing autographs for workers and fielding shouted questions from the SWAT team as they go.

If that was as nuts as it gets, I’d still consider that pretty strange, but it’s not. During the robbery, the Saints are cornered by Phillipe Lauren, the man who runs the Syndicate, a rival crime family muscling in on the Saints’ territory. He wants 60% of their takings or it’s all-out war. You can guess which choice the Saints make.

Your created character is the Boss, head of the gang, supported throughout by a handful of NPC allies such as smooth-talker Pierce and foul-mouthed femme fatale Shaundi. The plot goes from nuts to crazy at a rate of knots, the plot not so much playing out as smearing itself across the screen like a big spray of red and purple vomit.

There’s little point trying to follow what’s going on and instead you’re better off just enjoying the ride. It’s all very “Grand Theft Auto before Grand Theft Auto V”, when the name of the game was Chaos. You’ll steal cars, shoot people, run folk over, engage in street races and fire-fights. You’ll jump off buildings, swear at everyone in earshot, solicit ladies (and gentlemen) of the night, nod your head to late-nineties and early-noughties Hip Hop tunes you didn’t know you’d forgotten and generally suffer zero consequences for anything you do.

That being said, the quality of the port itself makes up for that with consequences on top of consequences. Even after the day-one patch it runs like a three-legged spider on a marble, suffering more or less every technical issue you can list. Framerate drops, textures that refuse to load, characters who walk through scenery or ragdoll off the screen. Most hilarious is when you pull up to allow an NPC to hop into your car, and they do literally that, leap-frogging through the bloody roof like you’re in an open-top sports car. It’s weird and happens too often to remain endearing. It’s just broken.

Sound quality is also weird. Music and voice come through the Switch’s speakers like they’re being shouted from a nearby clifftop in a storm. Well, okay, that’s a bit of an exaggeration, obviously, but it’s distractingly bad. Which is a shame, because Saints Row the Third has a fantastic soundtrack and some great sound design when you’re out in the busy streets of Steelport.

Aside the various DLC additions, the Switch doesn’t add anything besides a local multiplayer option. Playing with a friend is utterly bonkers, of course, and it’s certainly not to be sniffed at, but it’s a shame this is another Switch port without any Switch-specific features. No touch-screen for the in-game menu (which is a phone, people – this would have been perfect), and no little additions patched in like, I don’t know, a Mario suit with a big fire flower-shaped dildo-launcher attached to it. Or something.

Once again, this is a port only really worth picking up if you missed it the first time, but even then the iffy controls (sprint is the left bumper and the menu wheel is on A, for some reason best known only to Hell’s most prolific torturers) and shocking performance issues will leave you wondering what all the fuss was about. 8 years after its original release t’s still irreverent fun, though certainly hampered by iffy shooting and iffier driving, but Saints Row has always been one of those series that kind of gets a free pass because it’s so endearingly nuts. Check it out by all means because it is enjoyable despite its issues, but don’t go in expecting anything spectacular.

Adam Cook
Simultaneously released on PS4, Xbox One, Switch, and PC and scored 7.5/10 on PS4 As a Switch proposition, Sumo Digital’s Team Sonic Racing has perhaps the hardest road to first place imaginable. While on PS4 it has to compete with Crash Team Racing, on Xbox it’s got a free run to “best Kart-racer” on the platform, but on Switch, Mario Kart 8 Deluxe Edition is like the bigger brother who always manages to do things better than you and isn’t shy about letting everyone around you know.

There are really no Switch-specific features to speak of, and in fact, while the “team” aspect (you race in teams of three and your points accumulate depending on where all three of you finished) is a welcome change of pace and something genuinely different, but otherwise this is a game that feels mostly inferior to the game that preceded it: Sonic & All-Stars Racing Transformed.

The lack of an intro cut-scene to make the game fit onto a Switch-cart isn’t a deal breaker, the lower resolution textures aren’t either, really – though it looks noticeably worse in docked mode, as though the contrast is somehow higher. In docked mode and on the TV it runs at a locked 30fps, which is a stark contrast to the bigger brother versions that run unlocked at around 50fps and up. In a racer, I’d like to see that higher frame rate being at least an option over (even lower) resolution. Load times are also a little longer on Switch, but there is also that “on-the-go” ideal that no other version boasts. If you only want to play on Switch, you might not notice the frame rate difference unless you are jumping between Team Sonic Racing and Mario Kart 8, but when MK8 boasts such lovely visuals and a high frame rate, the questions facing Team Sonic Racing are slightly stronger worded.

The Switch version of Team Sonic Racing is still a good game. It still has an interesting mechanic, addictive (but microtransaction-free) loot boxes that can make you change up the cars you race in. The story is nonsense, but the racing is fun, but it’s just such a strange game to put out when you consider the competition. Regardless, this is an alright version of a good game. To say it feels odd reviewing Resi 4 would be an understatement. You know; I know; your cat knows: this is a 10/10 game. Yet you’ve already skimmed down to notice that isn’t the numerical review score I’ve given the game, and are wondering why.

Perhaps it’s unfair to ask where the motion controls went? The Wii had them, but this version is more a port of the PS4/Xbox One versions and thus doesn’t include them. It’s a shame when a Switch version of a title doesn’t utilise its unique features, and so it’s a shame the motion controls aren’t here. Elsewhere, in handheld mode this game isn’t easy to play. Resi 4 is an all-time classic: no mistake, but it’s a game that isn’t as easy as you might remember. If you don’t spend the time to slowly clear out areas early on, you will struggle with the precise aiming requirements. With that in mind, I was left thinking about how the next game Capcom should remake in a Resi 2 style, is this very game.

Price is a sticky issue, too. It’s simply too much for a game that, despite its status, is showing its age visually and mechanically. The genius is still there, of course, and the music and atmosphere is undeniably creepy. In fact, there are few (nearly) 15 year old games that can have you on edge like this one. Cleaner textures should take the edge off the rough, almost Silent Hill-like early vibe, but they don’t. The villagers are terrifying, the AI still makes you shake in your boots, and the music is still some of the most unsettling in gaming history. But that price, the lack of motion, and the fact you can play it elsewhere for cheaper, and with no Switch-specific features missing are all reasons why this masterpiece of a game has the score you scrolled down to read earlier. So there.

Originally released on PS4, Xbox One, iOS, and PC platforms and scored 7/10 on PC Deponia is a franchise that has been around for a very long time on PC platforms before seeing releases on consoles and iPad. Daedalic Entertainment’s point and click adventure series has seen multiple releases and ports over the years and as with most releases, a Switch port was only a matter of time. Daedalic brings the first Deponia game to Switch and while the game itself is still very good, this port has issues.

Humour plays a big part of Deponia and this will make or break your core experience. The controls take a bit to get used to and there are some obtuse puzzles but there is a lot to like here if you like the humour and the story. The art direction and designs here are excellent as well. It is just disappointing that the franchise’s first entry on Switch gets so much wrong when it comes to the actual release.

In its current state, the Switch version has no touch screen support. This is very disappointing given the platform and its various input options are perfectly suited to games in this genre. Thimbleweed Park is the best example of how to handle bringing the genre to Switch. The Switch version of Deponia also has some inconsistency with A and B for selecting. Usually, games that see late ports to Switch and cost more have a few added extras. Over here, you aren’t getting anything extra barring the asking price.

Even if this port had everything that I expected in a point and click adventure game on Switch, it would definitely not be worth this price given it costs half on other consoles. This price issue is made even worse when PS4 and Xbox get the full franchise (four games) for the price of this single game on Switch digitally. I know Switch ports are usually more expensive but this is pushing it too far. The game itself is worth experiencing and you can get it much cheaper almost everywhere else.