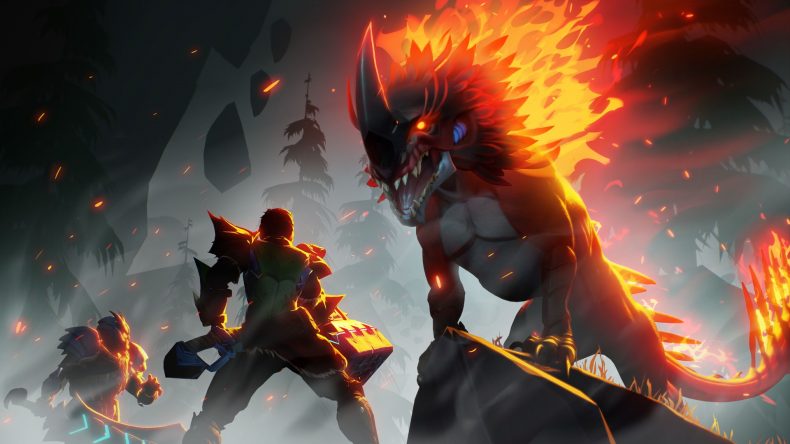 You’re still sent out to murder colossal wildlife for reasons that don’t go much beyond filling out your summer wardrobe with new breastplates made from hacked out cheekbones, and you’ll still wield a bevvy of imaginative weapons that treat the laws of physics like loose guidelines, but there’s less emphasis on actual hunting. The environments are far less dense and alive, and they’re also much smaller, meaning you’ll normally find the unfortunate beastie you’ve skipped out to club to death within a few minutes.

As a result, Dauntless feels like a much more immediate and player-friendly experience than Capcom’s Monster Hunter World, even if that means it also lacks much of the nuance and detail that have made MHW Capcom’s biggest selling release ever. Dauntless does away with a lot of the loftier aspirations of its closest rival and most obvious influence and instead presents you with a much more straightforward challenge. Your hunter – sorry, Slayer – is part of a pioneering team sent to Ramsgate, a frontier town in the Shattered Isles, a collection of floating landmasses riddled with large creatures called Behemoths. Occupying a weird kind of future-fantasy universe not entirely dissimilar to something like Final Fantasy, Dauntless tells a simple story of… doing something for reasons. In fact, the story is utterly superfluous and doesn’t ever really try to take centre stage, instead preferring to stand at the back and quietly eat crisps while you slam a giant hammer made from one monster’s arse into another monster’s face to make numbers pop out.

And you know what? It’s a glorious thing. Watching those numbers dance above the stricken fiends is mesmerisingly addictive, the simple colour code informing you whether you’re dealing base damage, wound damage or part damage. While the first two ensure quicker kills, it’s the yellow-coloured part damage that determines which trophies you’re going to back to the four artisans in Ramsgate to fashion new armour, weapons, repeaters (read: massive handcannons) and Lanterns. The latter are trinkets made from Behemoth parts that bestow short-term buffs or deal high, one-shot damage to the target.

Most of the quests you’ll be given by the various NPCs require the acquisition of parts or the crafting of certain weapons and tools, meaning you’ll constantly be working from goal to goal until you reach the highly challenging endgame, and you’ll rarely worry about where the story wandered off to. It’s similar again to Monster Hunter in that regard, as you simply won’t need a plot to pull you through. The action is enough. There are six weapon archetypes to choose from: Swords, which is kind of the default choice but brutal nonetheless; Axes, which are great for cutting bits off Behemoths; Hammers, which deal blunt damage and can stagger Behemoths; Repeaters, which are the only ranged option; Chain Blades, which have high attack speed and range, but low raw damage; and War Pikes, which offer a great deal of mobility, a ranged attack and the ability to wound Behemoths.

Every enemy you hunt will open up new armour to craft and new weapons to Forge, and then you’ll upgrade these by earning Orbs in Patrols and Pursuits (standard hunts). It’s a simple, effective system and one that gives you clear objectives in terms of which Behemoths to target. New enemies, consumables (potions and grenades), areas and blueprints are unlocked at a comfortable pace, so you rarely feel rushed, but there is a hefty difficulty curve once you’ve hunted all the basic breeds of Behemoth and start chasing down the Dire breeds. These are tougher, deadlier and more of a challenge even for those who consider themselves seasoned Slayers.

While those aforementioned comparisons are mostly fair, Dauntless is a much more “arcadey” and (*puts on crash helmet) “casual” affair than Monster Hunter World or even God Eater 3. Published by Epic, it has a very Fortnite-esque aesthetic, and the free-to-play model comes with a storefront and “Hunt Pass” chock full of cosmetic skins, emotes, banner modifications and clothing dyes. It’s very unobtrusive and, despite the option to quickly increase things like your gather speed for ingredients to make potions and grenades, the game is entirely cooperative so there’s no play-to-win element. That said, if you’re looking for depth, it is here. There are dozens of weapons to craft, each one levelling up as you gain Mastery ranks with it in a variety of ways such as dealing a certain amount of damage or using the special attack a certain amount of times. As they level up you’ll unlock modifiers and alternate special attacks, and you can further customise your weapon and armour pieces with Cells, earned in Cores awarded for completing quests and hitting certain milestones. These allow for some real build diversity that goes beyond simply matching your armour’s element with that of the Behemoth you’re pursuing, and allows, for example, to balance out your hammer’s strength with higher attack speed, or your Repeater’s damage boost (earned by reloading in close proximity to the Behemoth) with movement speed.

Finding Slayers to head out with is easy thanks to Dauntless boasting full cross-play matchmaking between PC, PS4, and Xbox One. The downside to this is that servers took a major hit for the first week or so and getting into a game was incredibly difficult. It wasn’t the best launch, but the content proved to be worth the wait. There are still bugs to work out, but what’s here at console launch is a solid offering.

Dauntless isn’t going to take Monster Hunter’s crown any time soon, but it’s not really trying to. Rather, it’s offering an enjoyable, less dense and more accessible alternative. It’s not the most beautiful game, though it does have its moments, but the variety of bosses is strong and the combat/reward loop is wonderfully addictive. If nothing else, the fact that every Behemoth, armour set and weapon can be unlocked without spending a penny makes it well worth checking out.

Servers can struggle
Environments could be more detailed

Mick Fraser: "The variety of bosses is strong and the combat/reward loop is wonderfully addictive. If nothing else, the fact that every Behemoth, armour set and weapon can be unlocked without spending a penny makes it well worth checking out."

Dauntless is out today for Nintendo Switch with exclusive gear

Dauntless officially launches for PS4, Xbox One and the Epic Games Store on May 21

Dauntless coming to consoles and mobiles in 2019