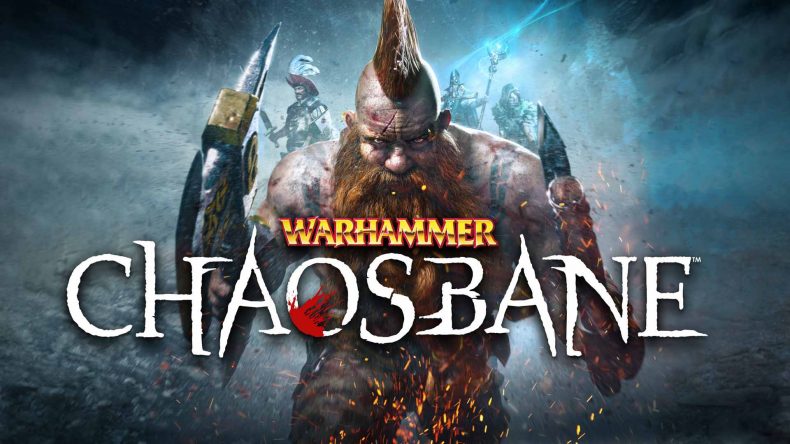 Being the first action RPG loot-em-up set in Games Workshop’s Warhammer universe, Warhammer: Chaosbane should be an instant hit. Obviously I’ve given the game away a bit with that spoilerific intro, but while it’s certainly not an instant hit, it’s not an instant fail either. See how I hook you in?

The shorthand that’s been thrown around is that it’s a Diablo-clone; the longhand is that “clone” is a bit of a strong word. It’s more of a Diablo impersonator, in that it looks and sounds like Blizzard’s looter if you squint your eyes but if you stand too close you’ll spot the false nose and pair of socks stuffed down its trousers.

The story takes place predominantly in the Empire, Warhammer’s analogous melting pot of Renaissance-era European nations, that recently saw off an invasion by the forces of Chaos thanks to current Emperor Magnus, who rallied the forces of good and defeated the Chaos Lord. Only a year later, Magnus is attacked in his fortress at Nuln by a mysterious sect and left suspended, inert, in a magical forcefield that’s slowly killing him. As one of four veterans of Magnus’ war, and the unlucky sot who just happens to be standing in the throne room when it all kicks off, you’re selected by Witchhunter-General Voss and Magnus’ Elven advisor Teclis to unravel the mystery of the Emperor’s fate and free the world from the grip of Chaos. Which translates into lots and lots of hacking, slashing, looting, and levelling. As a human soldier, wood-elf ranger, dwarven slayer, or high elf mage, you’ll descend into catacomb after catacomb to obliterate the enemies gathered therein and pick up all the inexplicably precious loot they’re carrying.

The core loop is certainly present: you kill enemies to earn loot and level your character up to wear the loot while unlocking or upgrading skills and abilities which make it easier to kill the enemies to earn the loot. But simply having the loop is, oddly, not quite enough. It’s actually incredibly hard to quantify what is enough and understand fully why Chaosbane isn’t that, but at a certain point towards the latter half of Chapter 1, I started to realise that Chaosbane was lacking that certain something, and the feeling persisted throughout.

It’s definitely enjoyable enough to hack mindlessly away at hordes of enemy monsters, but for some reason I couldn’t shake the feeling that I’d seen it all before. Actually, I had seen it all before, because I needed to start a new character after around 2 hours because my original choice of Elessa, the Elf Ranger had such a teeth-shatteringly hateful voice that it was either start a new character or play the entire game with her muted. I’ve heard bad performances before, although this isn’t really “bad” because I feel it’s a deliberate character trait, but by god it’s awful to listen to. But I digress. The main problem with Chaosbane isn’t the iffy voice acting, but rather the sense that there’s nothing here to wow you. Developer Eko Software has thrown enough new ideas into the pot to warrant merit, such as the “Archetype skill” attached to the right stick that does things like allow the ranger to dodge, the soldier to shield-bash the enemy, and the slayer to hookshot around on a pair of chains, and fairly early on you’ll unlock a secondary skill tree that let’s you spend currency to increase your stats incrementally in a system not to dissimilar to Diablo 3’s Paragon Levels, with the added bonus of unlocking God skills.

Very little is explained, though – like the fact that you spend hours earning the currency for these new stat increases without knowing what the hell it’s for, or the fact that you unlock active and passive skills at a rate of knots, but only the first level is an actual new skill, and you need to divvy up a finite pool of skill points if you want to actually upgrade them. It seems like a pointlessly convoluted system that feels designed to stand apart rather than excel.

The skills themselves are decent and colourful enough, but such dazzling displays of magical pyrotechnics are only as good as the effects they bestow and, while everyone has a veritable arsenal of offensive abilities, Chaosbane is incredibly stingy with heals. You have a single health potion on a cooldown, which certain perks will speed up, but that’s more or less it aside the regeneration which is far too slow to keep up during bigger fights. Take, as an example, an enemy introduced early that resembles Jabba the Hutt with dreadlocks that spews poison in a circular arc around it and follows you like its on coasters. The poison obliterates your health, which is fine if you have a potion and you’re only up against one, but more than that and you’ll need to fend off one then kite everything else around the area like the only guy with painkillers at a Coldplay concert until the cooldown clears. This makes soloing Chapter bosses an unbridled joy of kiting adds until you can heal, getting three hits in, rinsing and repeating. Of course you don’t have to play solo as you can also team up online with other players to combine your strengths and face the hordes of chaos together. I wasn’t able to find a game while reviewing, but I did spend time online during the beta and, while I can’t comment on the finished product, did find the experience elevated by going at it with a few other players. The characters have a certain amount of synergy with one another and when you’re all firing off skills and double-teaming the larger enemies it’s a lot of fun.

I went in with an open mind and high hopes having being fairly impressed with the beta but it didn’t take long for me to start seeing the cracks while playing. There is a lot of loot (which, as BioWare have recently learned, is always a plus in a looter), but a lot of it isn’t very flashy for most of the first few Chapters and I’m yet to find anything worth keeping because it all just offers stat increases rather than unique perks. The soldier, Konrad, looks particularly silly for the most part wearing billowy yellow trousers, a feathery red hat and a massive iron breastplate. Although, Bragi the Slayer makes up for that by having the majority of his loot translate into tribal tattoos, hair and beard styles, and massive axes. You could remove the other three classes and the Slayer would sell the entire game himself, if I’m honest.

I also quite like the shop. Whereas most looter RPGs like to have half a dozen vendors in town selling you stuff you can find for free by rooting around in the mangled guts of a zombie dog, Chaosbane instead lets you throw your trash at a single NPC in town who’ll reward you each time you give them enough to gain a level with them. Warhammer: Chaosbane is not a bad game, and certainly isn’t a poorly made game; in fact, there are elements of it that are pretty good. But when taken as a whole, it feels like a bit of an also-ran. There’s nothing about it that really sets it apart from other games in the genre, especially as the opening few hours in the drab greeny-grey sewers really don’t make the best first impression. The story is a bit plodding, too, told in animated storyboard cutscenes with a weirdly hurried narrator, and the action is the same hack ‘n’ slash dungeon delving we’ve been doing in Diablo for two decades and more recently in the free-to-play Path of Exile.

Oddly though, I did find myself drawn back to it, and in fact am still quite enjoying ploughing through the Exploration mode (similar in spirit to Diablo 3’s Adventure Mode minus the bounties), although I’ve no use for the optional Boss Rush mode as I really didn’t enjoy the boss fights at all. I’m not sure you can earnestly reward a game for being “unoriginal but inoffensive”, but that’s where I find myself with Chaosbane. It’s a solid enough experience for fans of the genre and the property, but it does nothing to make itself truly stand out, or draw in newcomers. Still, if you’re looking for a fairly enjoyable time-waster to work out some of that daily stress, Chaosbane is worth a look.

Lots of loot
The Slayer class is awesome

If you're after a fairly enjoyable loot-chaser to work out some of that daily stress, Chaosbane is worth a look.