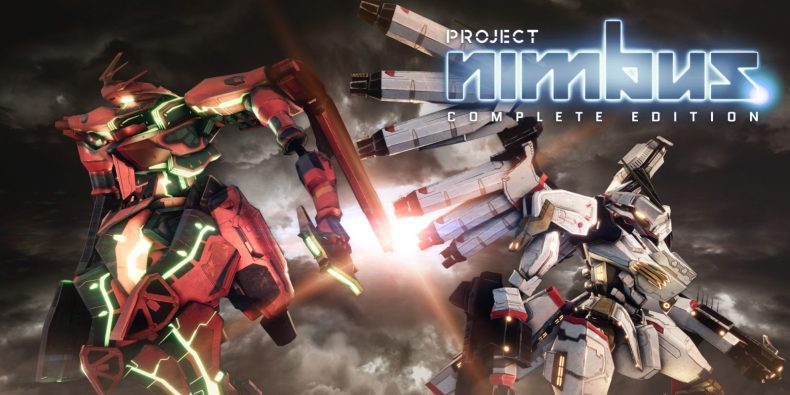 Sometimes you see a trailer for a video game and it really makes you sit forward and think, “I need to play this!”. That feeling came to me when I opened my e-mail and the trailer for Project Nimbus Complete Edition was in there. This trailer had robots, swords, dog fights, loads of missiles, and was fast paced and frenetic; it was also a lesson in how trailers can be incredibly well edited. I’m not about to say that Project Nimbus is a bad game, but the trailer was incredibly flattering to it.

Looking at the trailers you’d be expecting some sort of Z.O.E-esque mech action game and you’d be wrong. While the game certainly is frenetic, it certainly isn’t fast paced. Granted, certain enemies are so quick they’ll give you whiplash, but that’s only because the mech you’re in control of has the turning speed of a barge. As the story progresses you’ll take control of several mechs with different weapons and abilities, but overall manoeuvrability still feels incredibly restricted. The story is a bit of a mess too. There’s the UCN, the CFN, the Americans, the Russians, the Japanese, and, well, I had no idea who was on whose side. I know that some of these are the same people, but it’s never really explained in the game. You constantly flit between pilots for all the factions never quite aware who is fighting alongside who. Frequently the writing tries to emulate Metal Gear Solid as well, with references to specific weapons and locations, and also some severe naval gazing philosophy about ideologies and the meaning of life, but it all comes over incredibly cringe-worthy. It’s like they set themselves a bar to aim for, but could never admit to themselves that they could reach it.

Now that all of that’s out of the way, let’s really talk, Project Nimbus is pretty good. Let’s ignore the dumb philosophising and the poor voice acting and talk about how it feels to be behind these mechs. You will notice that their animations with regards to moving are quite bare bones, but overall the effect that it has on the combat is clear. The majority of enemies are slow moving mechs or stationary buildings, which means that your overall manoeuvrability doesn’t matter. Locking on and targeting is pretty easy, and you’ll be firing off rail gun slugs, from distance, missile barrages as you move in, followed by machine gun fire and a possible sword slash as you approach melee distance. You switch between the available weapons by pressing up and down on the d-pad, then pressing R2 to fire, later you’ll be able to press the – button to transform into a plane that literally gives you faster speed and the same turning circle, so, in a way, it’s worse. Weapons include missile barrages, a machine gun and a rail gun which acts like an energy cannon sniper rifle guaranteeing a kill should it hit. Later on you’ll get access to an energy sword which when swung homes in on your locked target and hits for major damage, getting the timing right for a hit is difficult, but when it does hit you’re pretty much guaranteed a kill. It’s kind of like a short range version of the rail gun, and equally as satisfying to use.

The areas you fight in are large and expansive too. There’s not exactly an abundance of detail in the landscapes or cityscapes but the sheer size of the places you get to battle in is really impressive. Some places have interiors with large doors separating areas from each other, you can also get outside of them and fight around the exterior which makes the scale even more impressive. There’s a bunch of different locations as well, large open deserts, cities, floating prisons and each of them feel different too. One problem with these large places is that the boundaries you have to fight within aren’t clear, and you’re not allowed to venture too far out or you fail. The biggest problem here is that frequently your enemies will move outside of the play area, and you’ll obviously give chase and as a result move out of bounds and then need to hurry to get back in all the while the enemy you’re trying to kill lingers around in an area you’re forbidden from entering.

Once you’re done with the story mode there’s a couple of extra modes here to get your teeth into. There’s a survival mode pitting you against waves of mecha to see how long you can survive; this is a real test of your skills at piloting a mech. Secondly there’s the Warfront mode, which allows you to earn parts to customise your mechs which in turn allows you to take on the missions at harder difficulties with more tools at your disposal.

This is a pretty generous package for the price, it’s not the most visually attractive thing and obviously this is going to be somewhat down to the limitations of the hardware, but as far as mech action goes this is rather enjoyable. Try not to cringe too hard over the corny dialogue and just enjoy blowing up robots, sometimes the simple things are the best.

Project Nimbus is a solid if unspectacular mecha action game that’s packed with content for a reasonable price.