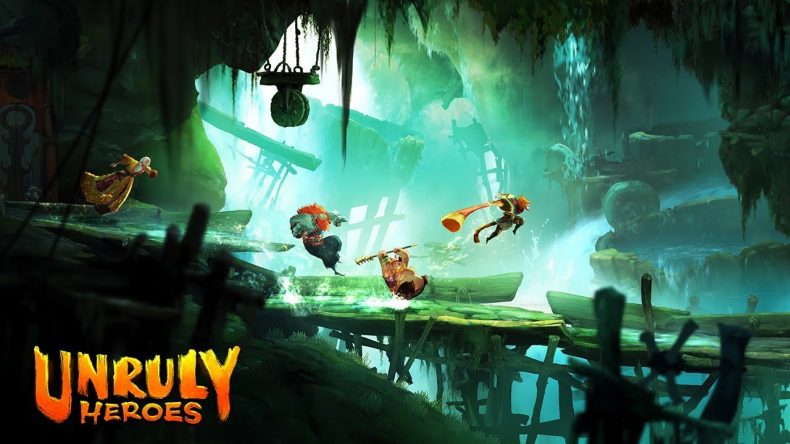 Whether it’s the Dragon Ball series or Enslaved: Odyssey to the West, video games have often dabbled with the classic Chinese text Journey to the West. Unruly Heroes uses the 2D platformer genre to tell its tale, where you take control of Sanzang, Wukong, Kihong, and Sandmonk to restore the Sacred Parchment and bring order to the world. And with more than a smidge of influence from the likes of Rayman Legends, it manages to deliver an enjoyable and varied adventure.

Unruly Heroes doesn’t simply make you choose one of the four main characters at the start of each level but instead encourages you to switch between each of them during play. Each character has their own life bar, as well as a special meter that fills after enemies are killed and once full can unleash a powerful AOE attack. Swapping between characters is a useful way of keeping them alive or being tactful with the use of their specials.

The differences between them – aside from the character models – fall into the two main areas of mobility and combat. Half the characters are blessed with smaller jumps but the ability to double-jump at will, whereas the other half have a single larger jump and can float in the air for more lateral movement. Combat is a little more unique depending on who you choose, ranging from fist-fighting to long-range staff combat, to even attacking with orbs of pure light that surround you and attack from multiple directions. You’ll likely find an individual you prefer; I myself gravitated towards Wukong the monkey, with his double-jump and far-reaching staff for combat being able to cope with the majority of situations. And those situations are actually surprisingly varied given the genre. There’s certainly an interesting mix of ideas and mechanics at play here that satisfyingly change things up across different levels. On one level you could be riding a psychedelic undead rollercoaster, another could see you literally manipulating gravity to move around, with another seeing you suck up the darkness with a rustic version of a Dustbuster that also helps move nearby platforms. It means that across its 29 levels, there’s always something new to experience, and levels are often more than simple smatterings of familiar platform stalwarts such as the wall-jump or pressure pads. Each character also has a unique ability that helps solve various puzzles. Wukong could create extended bridges to cross large gaps, Sandmonk can destroy barriers other characters can’t, and Kihong can inflate himself like a balloon at certain points, rising high above to new areas. It all helps to keep things fresh without running the risk of over-complicating proceedings, allowing you to enjoy the platforming and puzzling in front of you.

In addition, the game is a wonder to look at. Where it most fondly resembles Rayman Legends is in its art design and stunning visual aesthetic which shines through in droves. The game is gorgeous at times, will well-crafted and detailed levels, as well as stunning backgrounds and vistas that really immerse you. Unlike, say, Donkey Kong Country: Tropical Freeze that sees you actively launch into the background, these are for display purposes only, but they do still serve a different purpose, as they are often a perfect set up for future boss encounters. A lumbering shadow will move across at certain moments, giving you a glimpse of what you’ll likely face off against later, doing a great job of ramping up the expectation. Combat is simplistic, but it serves its purpose. With easy controls and the infamous dodge roll mechanic employed, most combat encounters become quite trivial and you’ll only take damage if you make a mistake or get overrun by sheer numbers. But it’s still fun because hitboxes are well executed and so it feels fair when hits land, either for you or the other way around. Miniboss battles that appear at the end of some levels are laughably simple, thanks to most of them simply swinging to the side, and this being heavily choreographed with windup animation and a big exclamation mark to warn you of impending damage. Rolling to safety and continued whacking with the occasional AOE attack sorts most of these out, which is a bit of a shame, but these are offset by the several larger boss battles, who have multiple life bars and different, more inventive ways to overcome them. Their difficulty tends still lie more with the platforming attributed to finding an opening, rather than the combat though, but their challenge is still a welcome addition given the simplicity of the rest of the combat.

The main complaint I have is that the platforming feels a bit floaty and imprecise at times, often resulting in a fall to your death, and a restart with a different character. Not good if I lose my favourite monkey character. Coupled with this, certain mechanics can feel inconsistent as wall-jumps don’t always seem to connect, neither does the automatic “pull-up” animation when you almost reach a ledge, and the game helps you the final few millimetres. This wouldn’t be so bad but the game often throws gauntlet runs at you, escaping an enemy or lava that requires timely movement, often with perfect accuracy, and nothing is more frustrating than failing a section through no real fault of your own. This is exacerbated further when you consider that the game keeps track of your number of deaths in a level and uses this – alongside how many coins you collected and the time taken to complete it – to rank your performance. I don’t mind retrying the odd time because of a glitch, these things happen, but when the game only awards me a bronze award due to my death count being so high, my competitive nature growls ferociously and I feel hard done by.

Story-wise, Unruly Heroes is paper-thin, like the parchment you’re tasked with restoring. It’s a shame considering the iconic subject matter at hand. However, one strong suit is the humour, often stirring a chuckle out of this miserly old curmudgeon. My only gripe would be that it seems very sparsely used, with some humourous characters or situations linked to single levels or moments. It seems like the game is afraid to embrace the comedy title it wants to be, which is a shame because it actually does this part surprisingly well.

There’s plenty of replayability here, not least to improve your ranking in each level. The most recent update also offers additional difficulty options, both a harder, less forgiving mode, and an easier one for those looking to just enjoy the experience. If you’re dedicated enough, there’s even a new Diamond ranking available if you secure those perfect runs on this new harder difficulty. All levels can be played with up to four players locally. Multiplayer works well, although you have to keep all on the same screen, so there’s a need to keep up with each other as you play. Thankfully characters don’t bang into each other (I’m looking at you Yoshi’s Crafted World) and are free to traverse the levels independently. Playing with more people does make the combat and boss battles simpler, as you might expect, but can make tight, timely set pieces more fiddly to accomplish. There’s also a multiplayer arena mode which is passable. Think along the lines of a watered-down Smash Bros. You’ll likely bounce off it after a while as it’s pretty shallow in scope, albeit still fun to beat the life out of a mate.

Overall, Unruly Heroes stays true to its name. Strong level design, platforming, and puzzles are all present, and it’s glorious to look at to boot. But the controls can be a bit, well, unruly, at times which is frustrating given the focus on your performance in each level. It still comes with a glowing recommendation though because when it works – which it does the majority of the time – you’re in for a well-designed and beautifully-executed treat of a game.

Unruly Heroes is a beautiful, fun and engaging platformer with enough charm and replayability to make it a solid recommendation to anyone.

Unruly Heroes now releases in Early 2019 for Xbox One, Switch, and PC platforms