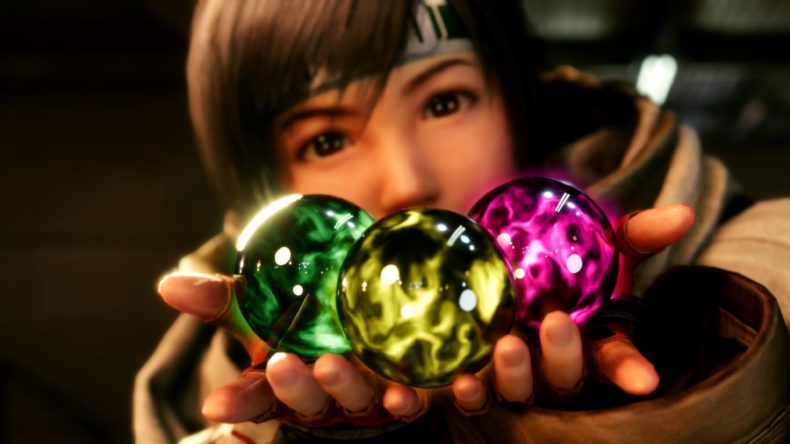 No matter how many times I heard different characters say the name “Yuffie” in Final Fantasy 7 Remake: Intergrade – Episode: INTERmission (Christ, that’s a mouthful), I couldn’t help but silently correct it in my head. To me it’s always been Yuffie, to sound like yuppy, not Yoo-fie. It shouldn’t matter, but it did. Thankfully, there was too much awesomeness happening for me to dwell on it.

This first slice of DLC for Final Fantasy 7 Remake is a fantastic, bite-sized adventure. It may not be utterly essential, but it certainly isn’t superfluous either. It follows Yuffie as she travels to Midgar from her home nation of Wutai on a vital mission. She’s here to steal Shinra’s secret Materia, and must infiltrate one of their gargantuan factories to do so. 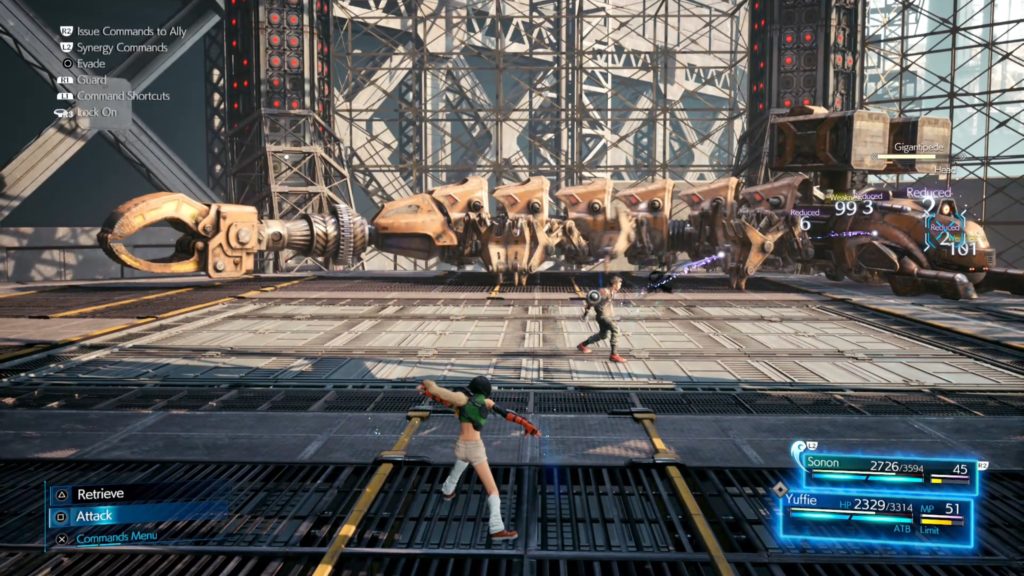 Alongside her somewhat beleaguered partner Sonon, she embarks on a quest during the middle third of Cloud’s adventure. While Remake did some incredible things with its combat, Intermission goes a step further. Fighting as Yuffie and Sonon is never short of excellent. While you can’t switch characters, you can issue commands to the hirsute beaut and select which abilities and items to use. You can also hit L2 to “synergise”, combining your attacks to focus on a single target. In this mode you can even synergise abilities for much stronger attacks.

Yuffie herself is wonderful to play as. You can opt to simply attack enemies with her shuriken up close, but if you do you’re missing out. Hit triangle and she’ll lodge her shuriken in the enemy and use powerful ninjutsu attacks to deal damage from afar. It’s frantic and satisfying, and fills the screen with light and colour. Intermission is even more beautiful than the original release thanks to Intergrade’s graphical boost. Combat is as invigorating as it is stunning to watch.

The infectious optimism that made Yuffie such a fan-favourite is present here. I went in expecting her to annoy me, as the chirpy characters often do in JRPGs. Instead I fell in love with her unbridled self-belief and confidence. She’s a great character, balanced perfectly with the far straighter Sonon. Their back and forth is skilfully written, and their interactions feel like part of the greater game. That said, the whole episode could lift right out and it wouldn’t affect much. As DLC go, it’s as non-essential as can be, and yet I’m hugely grateful that it exists. 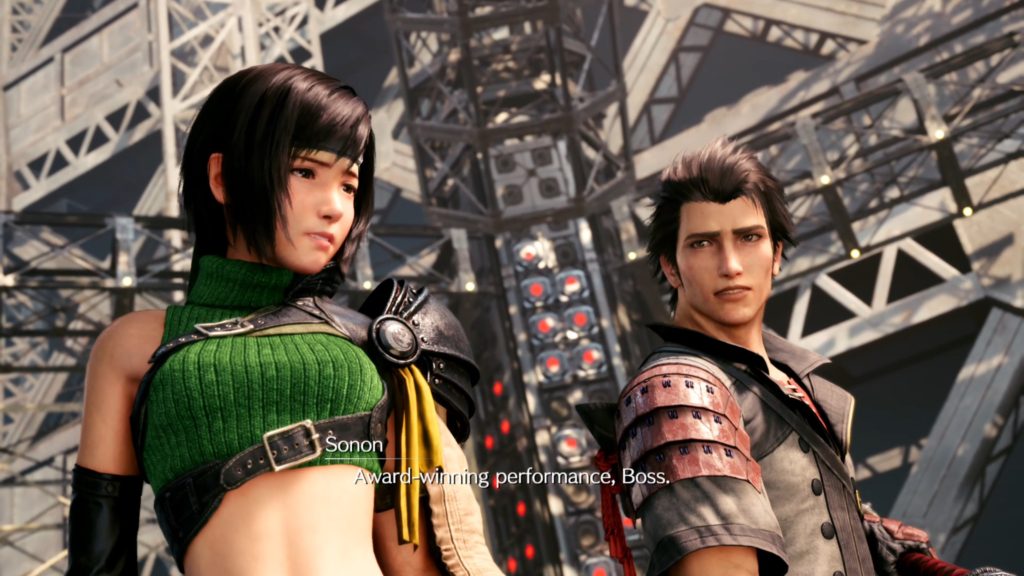 Much of Final Fantasy 7 Remake was quite serious, particularly towards the controversial cliffhanger finale. Intermission feels lighter throughout, which makes the occasional emotional beats much more affecting. As before, there’s a ton of side-stuff to do, including a new Summon Materia to defeat and earn. Ramuh is a huge, bearded wizard-looking dude who absolutely mirked me over and over again. Still, he’s well worth beating if only to make the combat against everything else that little bit easier.

If you feel like a break from the main story, you can locate a few side-concerns that reward you for taking part. There’s a timed block-breaking game inside Shinra headquarters that rewards Materia for high scores, for instance. Or you can play Fort Condor, a surprisingly addictive tower defence card game. Various characters return from Remake to challenge you, including Roche, among others. The aim is to breach your opponent’s defences with soldiers and robots spawned by cards. Each has different attack and defence stats, and the trick is to maximise your active squad as your ATB gauge slowly fills. Every block or two, another card becomes playable, but if you make too many mistakes you’ll be overrun. 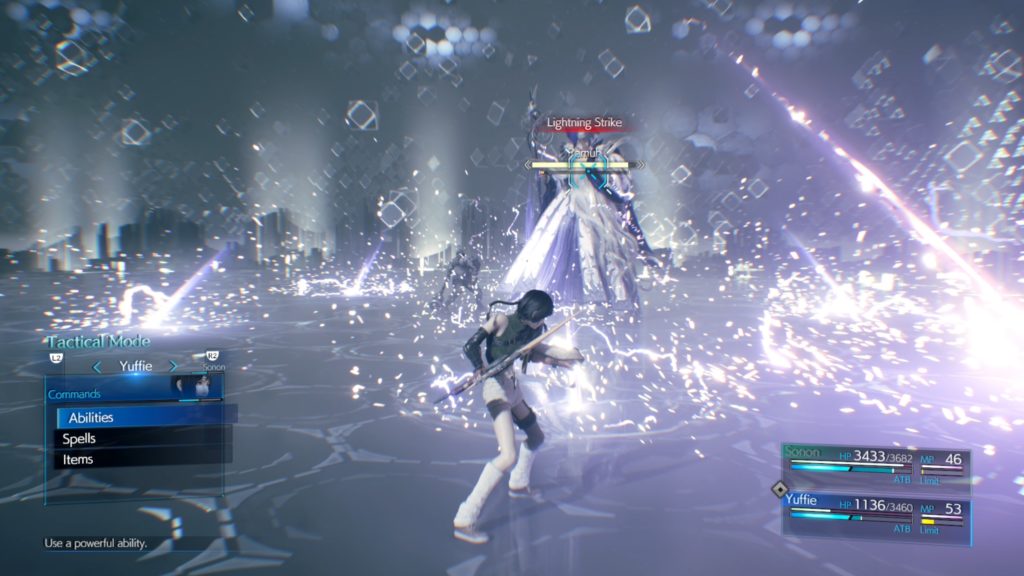 Elsewhere, Intergrade adds a new layer of polish to the original game. Textures and details are sharper, and colours pop. The environments look even more intricate than before, and load times are almost non-existent. Oh, and remember the iffy texturing on Cloud’s apartment door? Fixed – among other things. It runs smoother and looks better, and additional scenes tacked onto the ending set up future storylines. Perhaps they even hint at future DLC episodes. Thankfully they don’t change the ending completely, which is good news for many. Some of us really want to see where it’s going.

Sadly, the Final Fantasy 7 Remake Intermission DLC is only available for PS5. This will undoubtedly leave some out in the cold. If you fell in love with all over again with Cloud and co. in FF7 Remake, you’ll fall in love with Yuffie too. It would be nice if everyone could experience it. Her cheery charisma is undeniable, and the story, while relatively compact, is a fun little ride. The improved graphical clout that comes with Integrade for FF7 Remake is also welcome. All in all, this is great DLC for those playing the Remake on PS5.