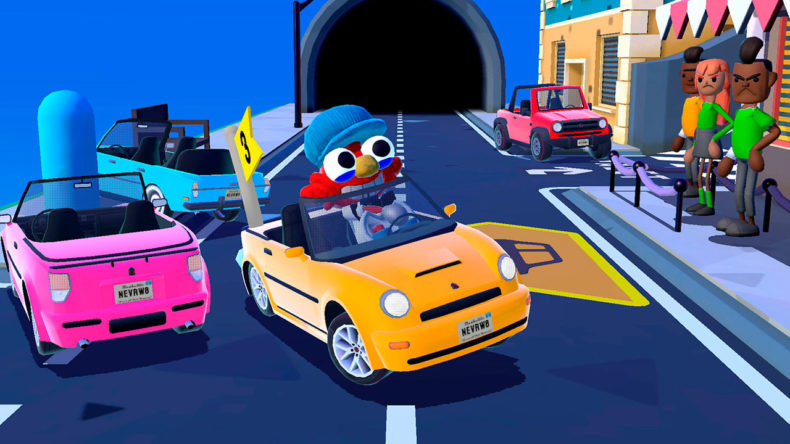 Until the moment I was hollered at by a stern avian wearing a headset, I had no ambitions of becoming a parking attendant in Very Very Valet. But within seconds of meeting your bluebird guv’nor, you are in control of a quirky muppet and behind the wheel of a car, and it is action stations. Taking a cue from the likes of Overcooked and other against the clock, frenetic action puzzlers, this has you managing a bonkers valet parking operation in a stylised cartoon world.

Your job is simple: pick up cars and park them in the pre-designated area of the level. Then return them to the owner once they have finished their activity. Sounds easy, right? Unfortunately for you, the general public are an absolute menace. Their day to day activities – shopping, eating a burger – all vary in timespan. When you are introduced to each new punter, they will give you a rough idea about how long they are going to take. They point out in colour co-ordinated speech bubble form that they are a fast or slow eater, for example.

This allows you to strategically park their vehicles so that you can return them in a semblance of order, maximising your time. You soon learn that you can actually leave cars parked anywhere once you pick them up. But things like additional traffic and obstacles on the stages can soon scupper your organisational efforts. From the outset you are given that plate spinning sense of overwhelming panic a game of this ilk is designed to induce. 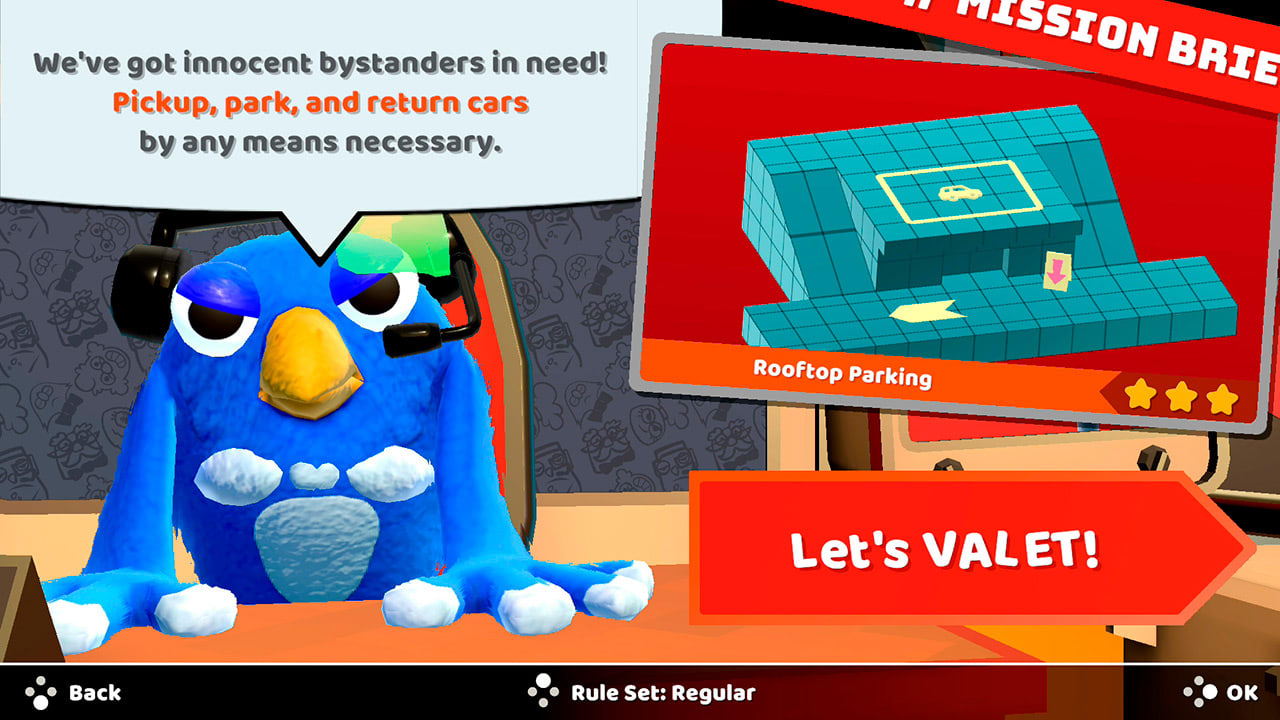 If you leave a potential customer waiting too long, or balls up the delivery, you will incur penalties that affect the star rating scoring system. Stars are the in-game currency used to unlock new levels. So valeting economically and accurately is important if you wish to progress. More importantly, leaving someone sat in their car twiddling their thumbs will lead to their car being sucked up into the ether by mysterious alien forces, never to return. This mechanic affects your overall ranking on each stage – the more UFO abductions, the worse your score. It also forms the basis of a madcap plot that backdrops the lunacy, with the Very Very Valet’s azure-feathered boss investigating the phenomenon. So far, so utterly hatstand.

Level design is excellent throughout the game, with fun inclusions that alter how you approach the parking madness. Warp pipes, errant aeroplanes, no-parking zones and car launchers all come into play. There are even some alternative bonus stages where you are whisked away to strange locations to carry out some different, unique tasks set aside from the standard park ‘em up. From crashing down bowling pins to clearing up rubbish, these are a fun distraction. 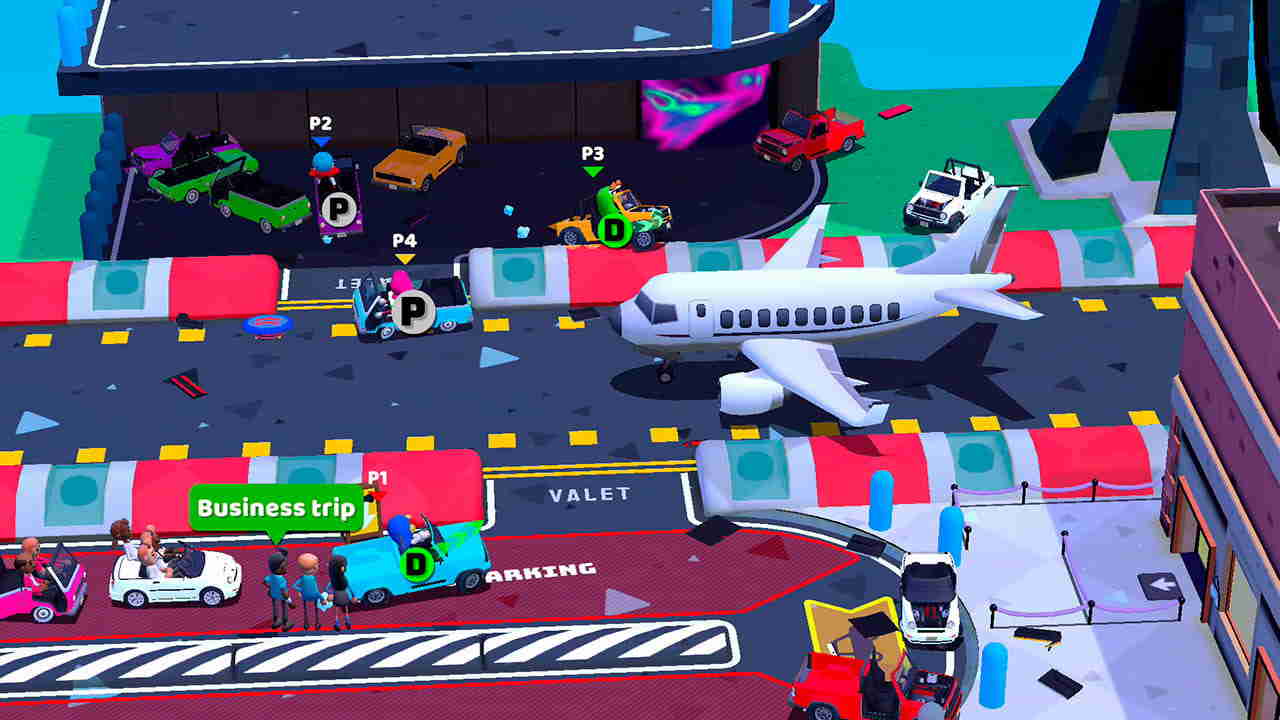 The scoring system is a strange one. You can actually still progress through a stage without actually parking any cars at all. You just won’t earn any stars to crack open the final stage of each of the four distinct areas. Earning stars is your only real worry, as the points scoring system has absolutely zero consequences on proceedings. This makes it itherefore completely arbitrary. Odd.

Gameplay is spread over twenty main stages. And while you can progress through these on your own, the game becomes much more manageable and dare I say more fun when playing couch co-op, as hectic as the on-screen action can be with four human controlled characters. Where it falls down ever so slightly is in the controls. Top down driving games normally employ an accelerator command, or “tank” style rotational controls. 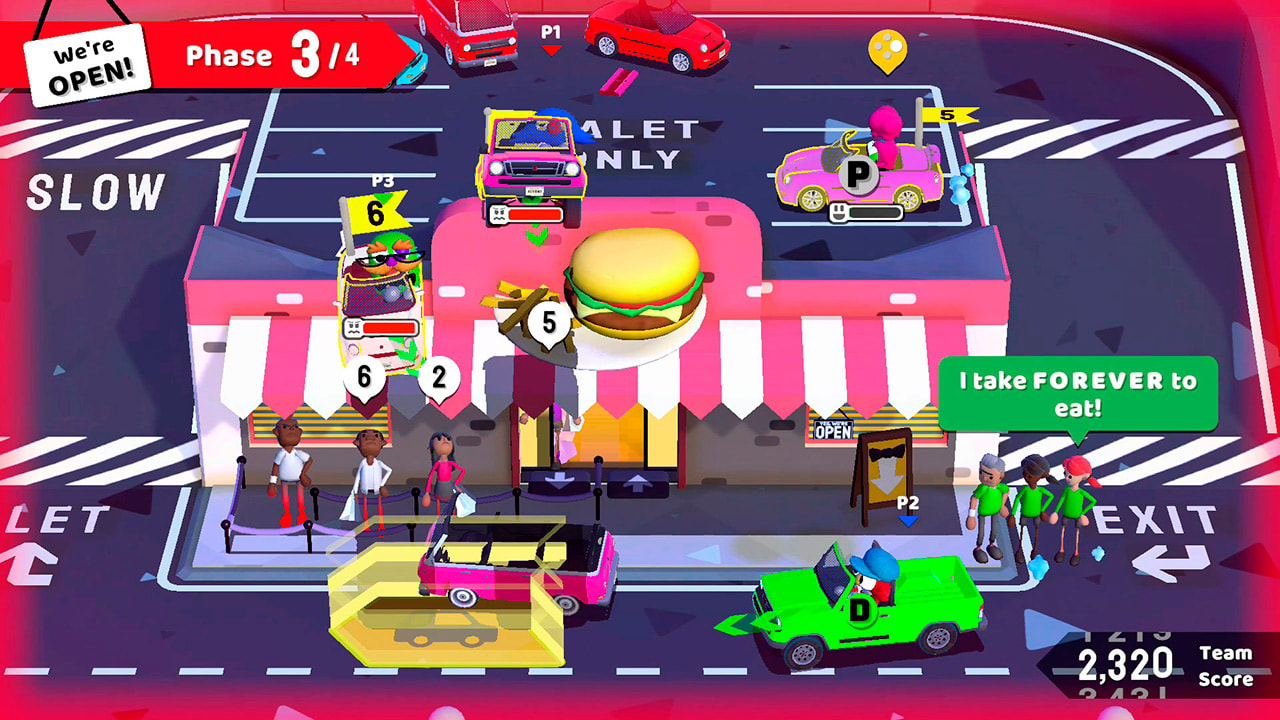 Here you begin on foot and enter cars by pressing a button. The car then moves in whichever direction you point the left analogue stick. To reverse, you have to come to a complete halt and push the opposite direction when the car is in a neutral state. You can use a sharp drift turn by holding a button down. But it doesn’t feel intuitive and takes a heck of a lot of getting used to.

Maybe this was an intentional ploy to add to chaos. But it feels unnatural for older gamers like me, predisposed as we are to certain conventions. It certainly doesn’t break the experience, though. This is a decent, decent effort from Toyful. It’s quirky premise executed in an eye catching and genuinely funny way. And the positives nearly always outweighing the negatives.

Very Very Valet is a decent, decent effort from Toyful – a quirky premise executed in an eye catching and genuinely funny way, with the positives nearly always outweighing the negatives.