previous
Shiren the Wanderer: The Tower of Fortune and the Dice of Fate review
random
next
Per Aspera review
0 likes 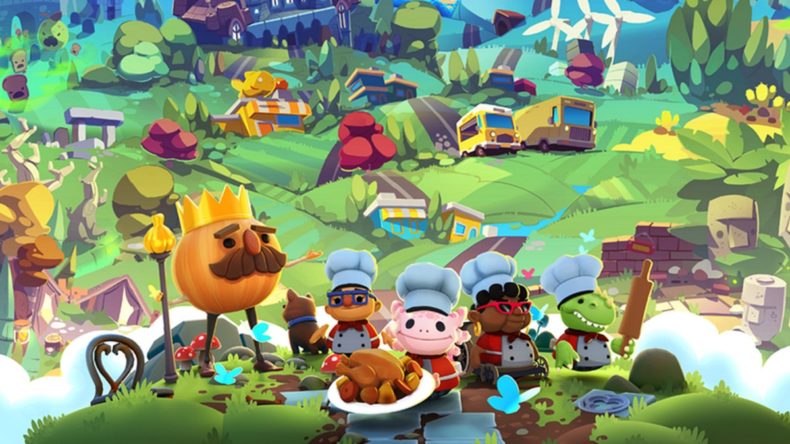 As someone who spends a lot of time gaming with my partner, I really appreciate the recent resurgence of co-op games. Titles like Good Job! and Totally Reliable Delivery Service offer slapstick fun and entertaining team based gameplay, but it’s hard to imagine them existing without the success of Overcooked. The 2016 cooking epic impressed multiplayer fans almost immediately, and its sequel was just as entertaining. Now at the birth of a new console generation, Team17 have combined these two co-op classics and all DLC for a perfect 4K 60FPS bundle in Overcooked! All You Can Eat.

If you haven’t played the Overcooked games before, the concept is pretty simple. You and up to 3 friends are given orders to fulfil, and you need to cook them as fast as possible. Each meal has a few different steps you’ll need to complete before serving them up. You might need to chop and boil vegetables for a hearty soup, or combine cooked rice and meat in a wrap for a tasty burrito before plating up.

This might sound pretty simple, but the different kitchen layouts mean teamwork is key. One player may have access to the frying pan, but not the chopping board so they can slice up the meat. Without communicating with your team mates and passing items back and forth, you’ll end up with pizzas missing toppings or no clean plates to serve onto. With the timer ticking down in the background, you won’t fulfil your orders in time if you don’t work together. 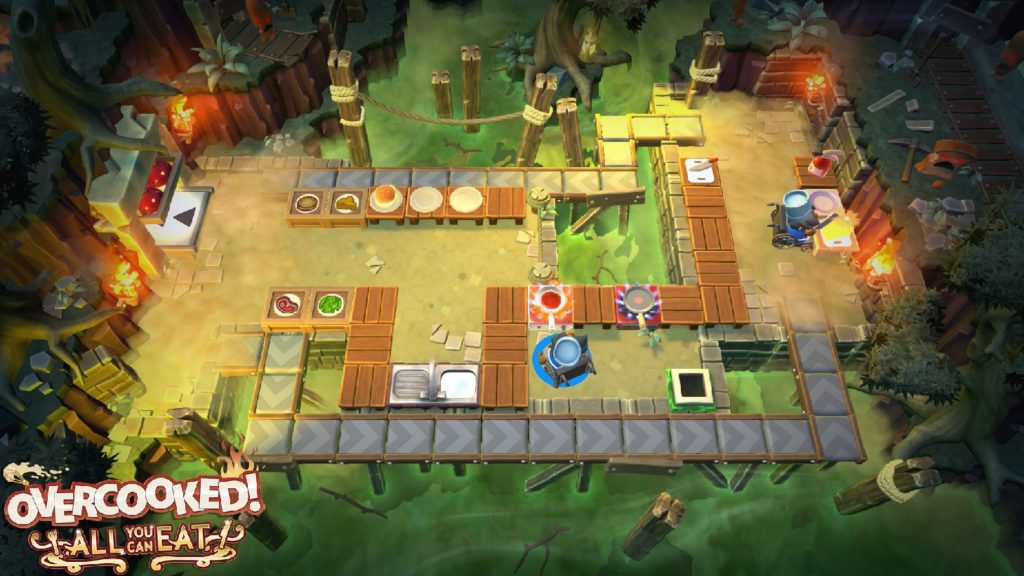 After a couple of fairly straightforward levels, you’ll soon be thrown into pure chaos that Overcooked is known for. Each new stage has a bunch of moving parts you’ll need to cook around, with a huge range of obstacles to overcome if you want to get a high score. There are pirate ships with counters that move as the boat rocks, earthquakes that separate the team, and even kitchens in the heart of a volcano complete with fireballs. The sheer variety in the stages is frankly staggering.

There’s a charming little story that propels you through the stages, about saving the world from food based threats (be they large spaghetti monsters or the living bread). I always enjoyed meeting up with King Onion to find out more about how our kitchen skills were saving the world, and he didn’t pop up often enough to be annoying.

Once you’ve baked, chopped and sautéed your way through the original Overcooked (or if you decide to play out of order) then you can immediately get started on the sequel. One of the big changes moving into the Overcooked 2 campaign is the ability to throw non-cooked objects. This leads to epic moments of teamwork where you’re throwing ingredients from two different trucks to assemble your food. If you’re a real accuracy god you can even throw ingredients into the cooker itself, making life much easier for your fellow chefs. 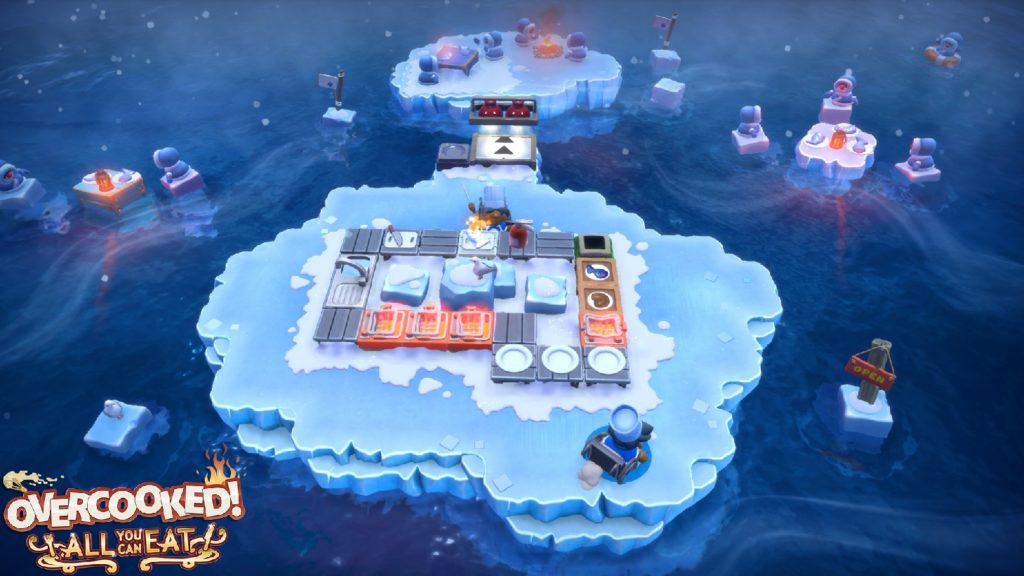 If you didn’t dip into the extra content that Team17 released for the Overcooked games, you’re in for a treat. Each of the 12 added campaigns features a host of new recipes and mechanics, usually around a central theme. There are plenty of seasonal additions (perfect for the current time of year) as well as interesting setting like campfire cooking.

As well as bundling all of this content together, Overcooked! All You Can Eat offers a generous buffet of other improvements. The game runs at a constant 60FPS with 4K support on next gen hardware, and has those near instant load times that haven’t stopped feeling magical. Cross play is now available too, so regardless of console you’ll be able to cook with your friends. There are also a bunch of new accessibility options added to the games, as well as an assist mode to ensure you can scale the difficulty to suit your playstyle and ability.

An aspect of Overcooked! All You Can Eat that personally touched me, is the inclusivity showcased in the game’s vast array of playable characters. Seeing my disabled partner’s face light up when they realised they could play as a wheelchair user was the gaming highlight of 2020 for me, and Team 17 and Ghost Town Games deserve so much credit for this representation. 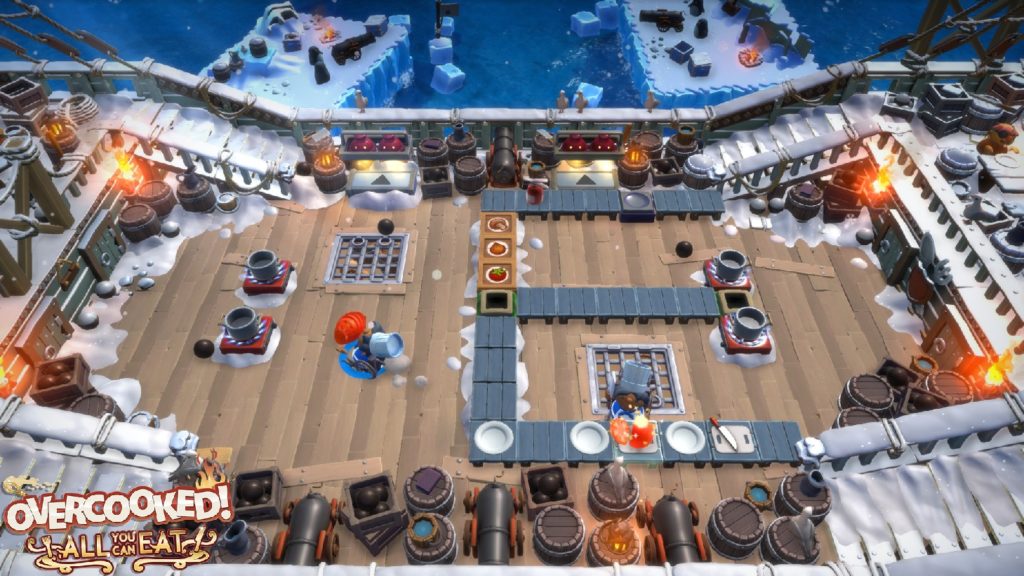 The only issue I had when playing Overcooked was in some of the larger stages. With the camera zoomed out to fit a bigger kitchen area on the screen, it can be hard to tell individual ingredients and items apart. In the heat of the moment mistaking a mushroom for an onion can ruin a dish, and potentially your score alongside it.

Overcooked! All You Can Eat is the definitive bundle of two of the best co-op games ever made. Using all of your communication skills to overcome the chaos of the kitchen is incredibly rewarding, and the variety of wacky obstacles you’ll face is amazing. With hundreds of levels, technical improvements and cross play, this is the ultimate Overcooked experience.

Hard to tell things apart on zoomed out stages

Overcooked! All You Can Eat bundles two exquisite co-op games together, while adding some great accessibility options and making a ton of impressive technical improvements.