previous
Destropolis review
random
next
Overcooked! All You Can Eat review
0 likes 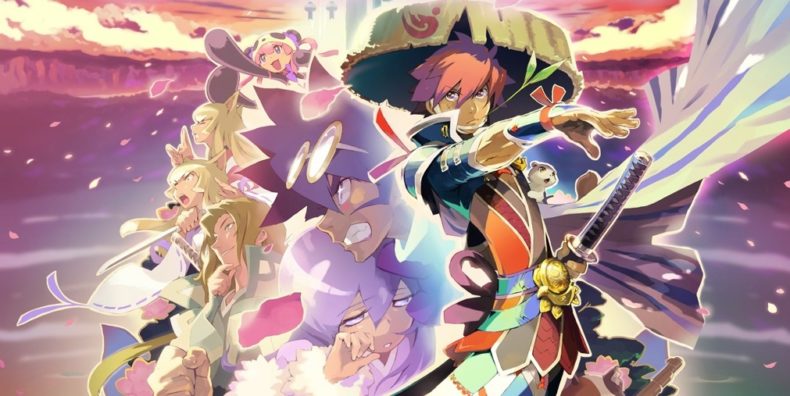 The term Roguelike is regularly misused in gaming. The vast majority of “Roguelike” games you play have very little in common with the 1980 Unix game Rogue (the originator of the term) with the main similarity usually being permadeath. I was first introduced to this punishing type of game by a friend who became obsessed with Nethack. Watching him walk around a grid based dungeon and fail in creative ways fascinated me, but ultimately it felt like I’d need a degree to join him in his adventures. It took over a decade, but I finally feel like I can understand the appeal of the classic Roguelike thanks to Shiren the Wanderer: The Tower of Fortune and the Dice of Fate.

Shiren and his ferret companion have just finished up confronting gods in a previous adventure, when they arrive at Inori Village. There they find a young girl called Oyu with a terminal illness, and learn that her love interest Jirokichi is on his way to the dangerous Tower of Fortune to change her fate. If he can make his way through the towers of past, present and future he’ll be able to gather the Dice of Fate and save Oyu, so Shiren rushes off to help him with this and headlong into adventure.

Making your way through these towers is easier said than done, with each of them packed hundreds of enemies ready to ruin Shiren’s day. Movement is grid based, with every step you take also allowing the various monsters to do the same. Taking down an enemy is as simple as approaching them and hitting the attack button until they perish, but with each swing of your Katana you’ll give them the opportunity to bash you right back. 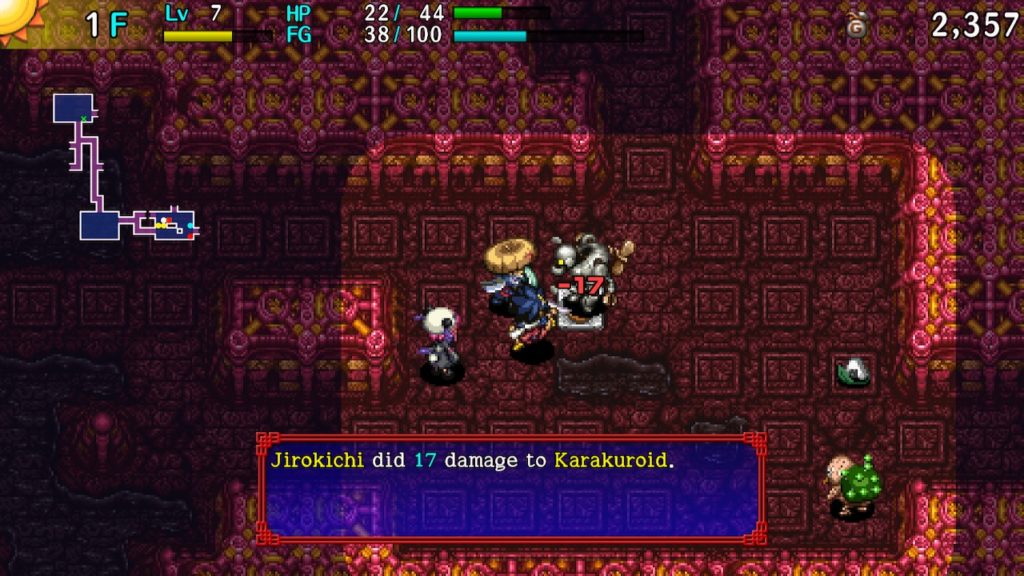 Moving and attacking may be simple, but all of the other systems in Shiren the Wanderer are anything but. To stand even a small chance of surviving a run, you’ll need to learn about Scrolls, Curses, Pots and how you can utilise them to survive an overwhelming situation. There’s a lot of information to take in, but fortunately you immediately have access to the Beginner’s House and its vast selection of tutorials to get you up to speed. Understanding the selection of random items you’ll find in the towers doesn’t happen overnight, but with every tidbit of knowledge you gather you’ll improve your chances of success going forward.

Your improvement as a player is key, because every time you die you’ll lose everything other than items and money you’ve squirreled away in the home area. Resetting to level 1 and losing your carefully gathered inventory may sound like a recipe for despair, but there’s always more loot to find and experience to earn. Each area is completely beatable with the items you find along the way, but if you’re lamenting your loss too much to cope you can also ask for help when you collapse and wait for another player to come and rescue you. You’ll need to stop playing until this happens though, and I didn’t have the patience to stop playing the game for that long. 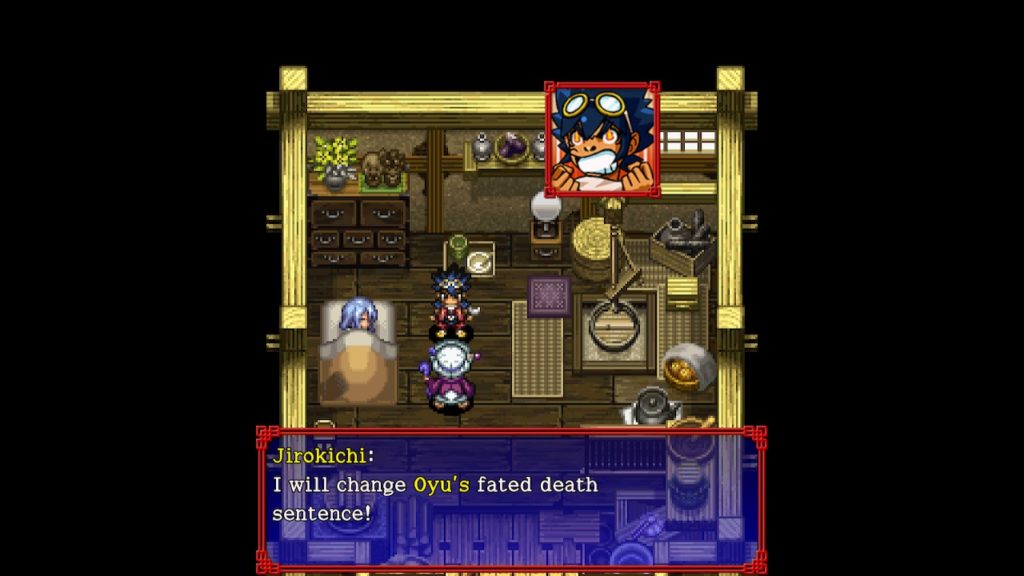 When the systems of Shiren the Wanderer all eventually click with you, nothing else can quite compare. Entering a room full of enemies and knowing that you’ll survive if you open up a laughing pot to make them hysterical, or escaping near death by swapping places with an enemy blocking the way with the wave of a staff makes you feel like a genius. Using the tools you gather against foes creatively is extremely satisfying, and the sooner you learn that it’s better to survive with an empty inventory than to die with a bag full of rare scrolls, the better.

For a port of a DS game Shiren the Wanderer looks rather beautiful on Switch, mainly thanks to its timeless sprite work. Enemies and allies alike are expertly designed and full of charm. The soundtrack (with new songs for the Switch version) is a delight too, which is lucky as you’ll be listening to it for a long time as on your journey of failure and personal growth.

If you played Shiren the Wanderer: The Tower of Fortune and the Dice of Fate on Vita already, you’ll be happy to hear that there are a handful of extra dungeons to endure if the campaign isn’t punishing enough. One of these limits the strength of physical attacks, one allows you to set turn limits, and another gives you less experience if you take too long to eliminate an enemy. For those seeking challenge these optional extras certainly provide it, but they were too much for me to handle. 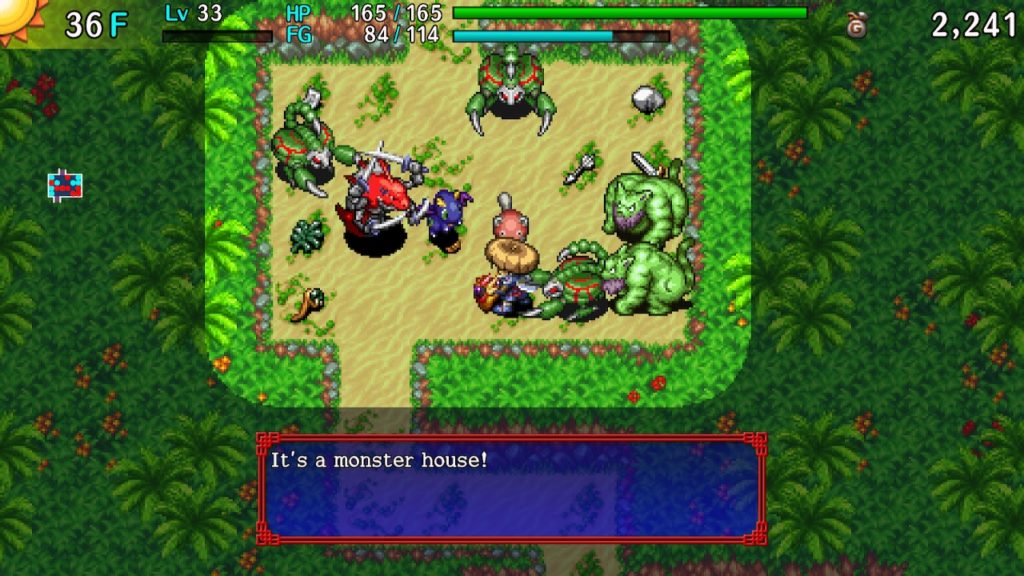 As much as I adored my time adventuring with Shiren, it takes a long time to get going. I spent well over an hour working through the tutorials at the Beginner’s House, and it wasn’t a particularly thrilling introduction. The tutorials aren’t mandatory, but it would be infinitely harder to learn the game’s mechanics if you skip them. In the end it was worth ploughing through them all at once, but prepare yourself for a slow start.

Shiren the Wanderer: The Tower of Fortune and the Dice of Fate is an exquisite Roguelike, which only becomes more enjoyable as you delve into its deep systems. Once you’ve mastered its excessive tutorials, you’ll be treated to an RPG adventure which rewards careful planning and learning from your mistakes.

A thoughtful and rewarding classic Roguelike, Shiren the Wanderer: The Tower of Fortune and the Dice of Fate is incredibly satisfying if you put the time into it.

You may also like
ChunsoftShiren The Wanderer: The Tower of Fortune and the Dice of FateReviews