previous
DRAGON QUEST XI S: Echoes of an Elusive Age - Definitive Edition PS4 review
random
next
Shiren the Wanderer: The Tower of Fortune and the Dice of Fate review
0 likes 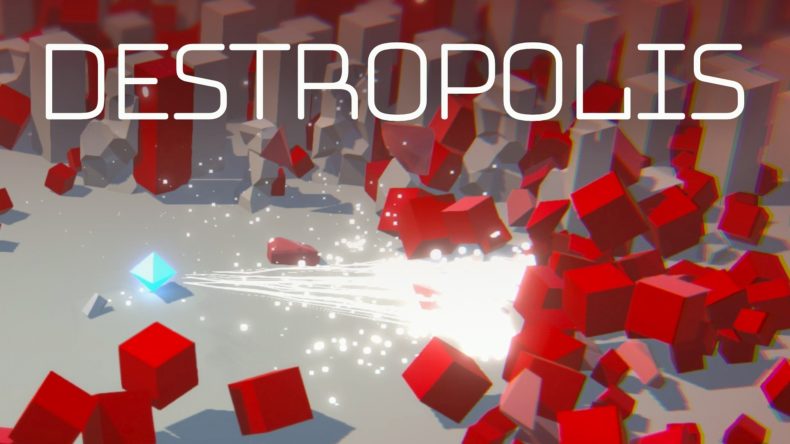 As much as I love a sprawling narrative experience, sometimes I just want to kick back with an arcade game. There’s something intensely satisfying about spending 10 minutes focusing on pure gameplay and aiming for a high score. The advent of digital storefronts brought this relic of gaming’s past back into the limelight, with games like Geometry Wars offering compelling twitch shooting and online leaderboards so you could compete with your friends. Over a decade later, Destropolis has come to channel that same twin stick energy onto the Switch with similarly simple shapes.

In Destropolis you control a floating diamond, in a minimalist cityscape. Red cubes are rolling towards you from all angles, and it’s up to you to blast them away with an array of weaponry and power ups. If a cube rolls into you then you’ll take damage, so manoeuvring around incoming enemies and blasting through the crowd is your only way to stay alive.

You start each attempt to survive the polygonal assault with a simple pistol, but you’ll soon find a plethora of weapons dropped by enemies or building. Not all weapons are created equal, so you’ll want to find which work best for you can grab them quick. There are some simple rapid fire weapons and shotguns that behave exactly how you expect, but there are also more unique drops like the Gauss Gun that fires a huge laser in a straight line. My favourite ended up being the simple bazooka, using its sheer explosive power to part the sea of shapes for a hasty exit always felt pleasing. 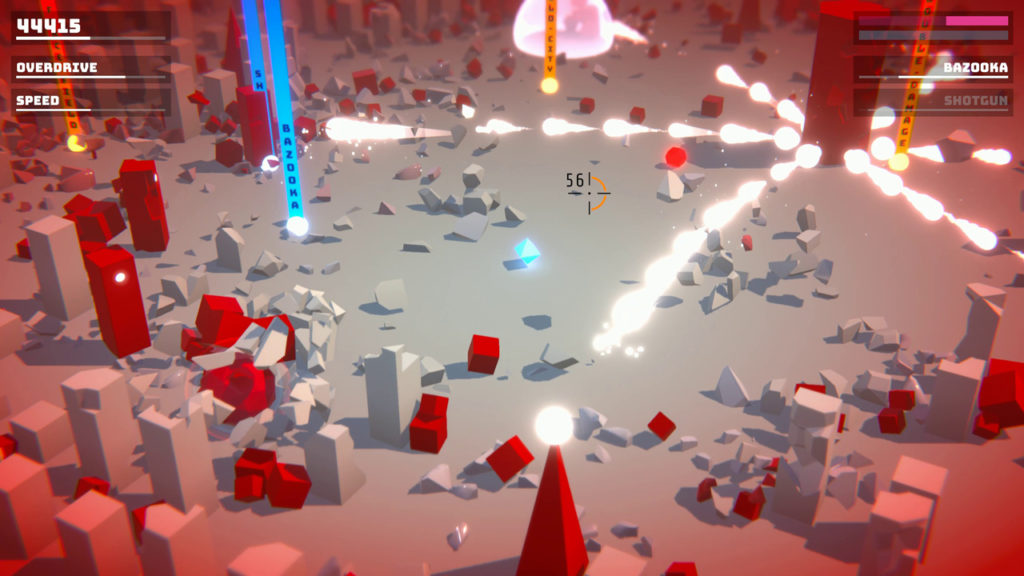 The buildings of the city are just as breakable as the enemies coming to eliminate you, and levelling them has a significant effect on the game. Destroying buildings could net you a new gun or two, but without them enemies don’t have to move around them and will approach you faster. You might be lucky enough to stumble across a Rebuild City power up, but it’s worth being cautious.

The passive power ups are just as satisfying to find as a new weapon. There are simple health drops and damage multipliers, but the more destructive effects are much more exciting. There’s no bigger relief than when you find a Nuke as the enemies close in, levelling a screen full of evil blocks in one bright bang.

After a few waves of cubes are dispatched, you’ll start spotting other shapely foes in the crowd. Large square towers fire their own lasers at you, which you’ll need to blast quickly as dodging their attacks are practically impossible. There are also explosive spheres that roll in at speed, and a huge hexagonal baddie that spins lasers all around the screen. It can feel overwhelming to have to avoid all the ranged attacks at once, but if you’ve made it far enough to see these enemies you probably already have a hefty score. 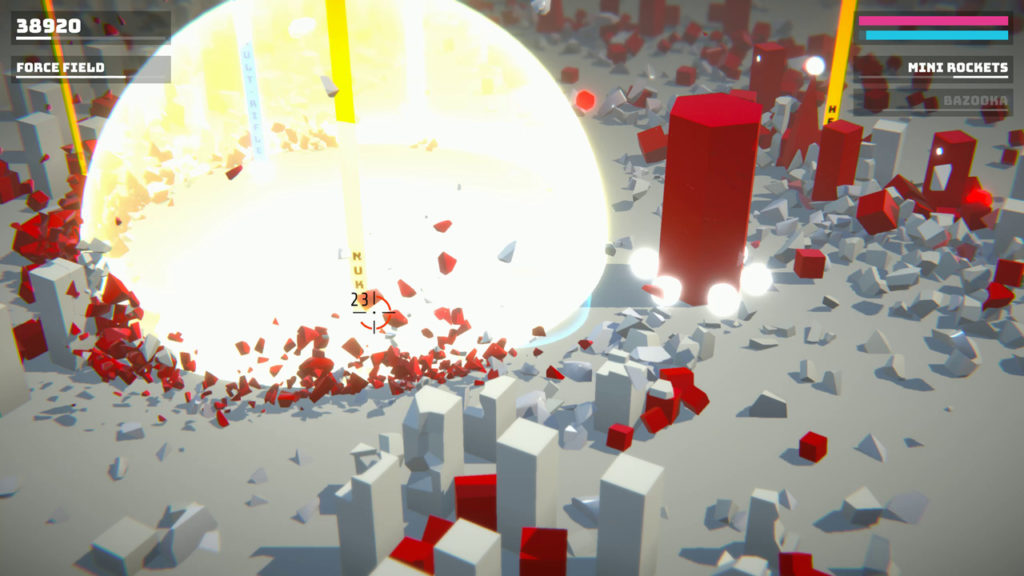 Between each wave, you’ll be offered a selection of perks to choose from. These passive buffs can make a huge difference in your firepower and survivability. A lot of these perks make it so certain power ups are more likely to drop, so you’ll probably end up trying to go for a build that means your favourite gun and power are readily available to cause some chaos.

The online leaderboards provide a good reason to continue to master your block battering skills, but if that isn’t enough to keep you coming back you also level up between runs. Each time you earn enough experience you’ll unlock new perk options that will appear in the random pool, and although this is a nice addition the game does a pretty poor job of letting you know it happened at all.

It’s worth mentioning that Destropolis’ minimalist aesthetic and electronic soundtrack work together to really improve the overall experience. A tense run is made all the more entertaining when you’re bopping along to the beat in a state of pure focus. 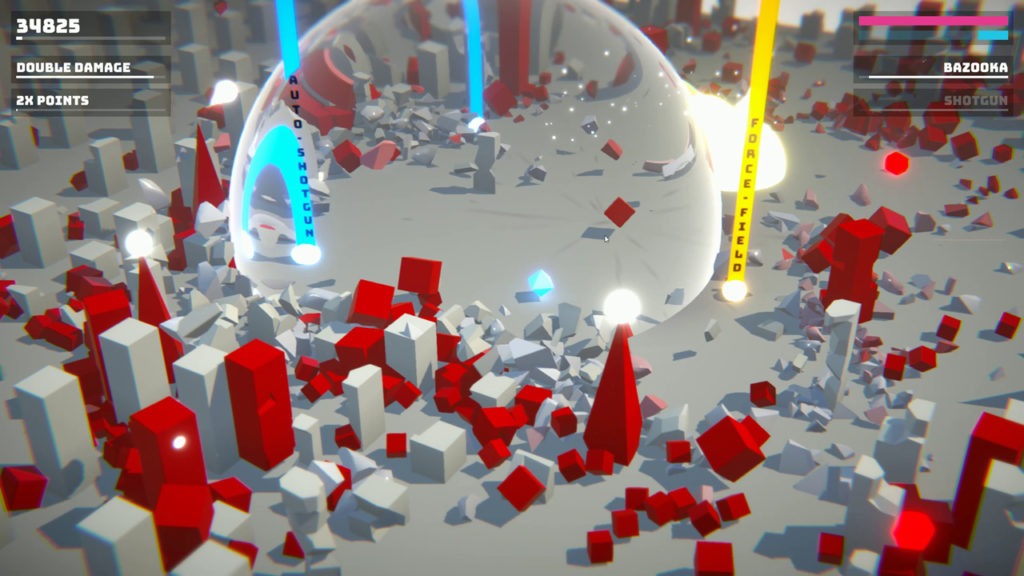 Although I really enjoy the score chasing that Destropolis offers, it’s a shame it doesn’t offer anything else to sink your teeth into. There is one single game mode to play, and after a few runs you’ll probably move onto something else for a bit of a break. You can play with up to 3 players cooperatively, which is a fun way to play, but each with need their own set of Joycons or a pro controller to join in.

Destropolis is a very entertaining throwback to arcade and early indie games, that suffers from only having one game mode. The array of power ups and guns are a lot of fun to use, but unless your a hardcore score chaser there isn’t really much to sink your teeth into.

Destropolis is a fun arcade game, that score chasers will adore. Unfortunately for everyone else, there just isn't enough content to keep you coming back for more.