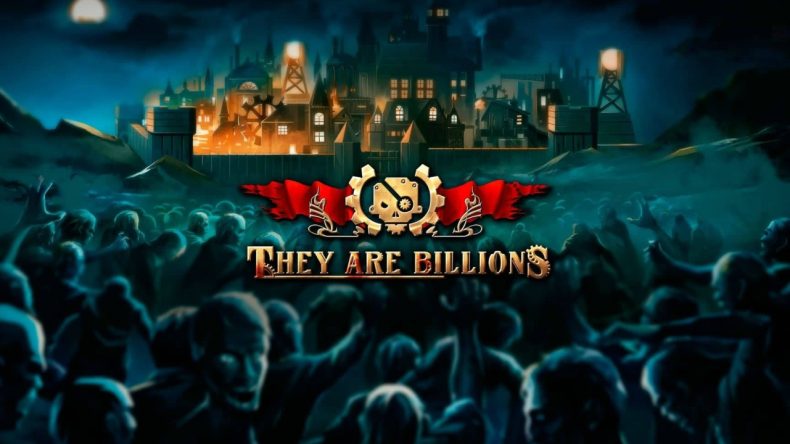 The expression “failure is not an option” has always struck me as a bit silly. I mean, no one chooses failure, do they? No one lays out their plan of action and says, “Right, first off, we could always cock this up royally and do something else – all in favour?” As a general rule, failure is something you plan against, not for. But then you play something like They Are Billions and it starts to make sense, because literally any other choice than “I will play this game flawlessly and make zero mistakes” is practically handing it your arse on a plate with a bucket of KY and no safe words.

Going into They Are Billions is like entering a very nicely decorated dungeon. It’s welcoming, at first, all pretty colours and “hey, why don’t you pitch a tent here? Why not build a sawmill to harvest that wood? Look at your little colonists, clipping to and fro, gathering and building, the industrious little scamps.” But before you know it, the pretty colours are smeared with soot and blood, everything is turning to death around you, and the screams… my god, the screams. Because the “billions” in the title doesn’t refer to the cheery little villagers going about their business of propping up your fledgling sweatshop economy with their hard-spent blood and tears, it refers to the hordes of flesh-eating zombies that have killed or infected the rest of humanity. For They Are Billions is a post-apocalyptic steampunk civilisation builder that takes a real perverse kind of glee from watching you cry all over your controller.

It begins innocuously enough, with your Command Centre allowing you to build rudimentary little dwellings that will spawn Colonists and Workers. Everything you build is reliant on your resources, which is pretty par for the course, except instead of dealing with the odd trespassing scout or minor natural disaster, you’re building fences and towers to repel encroaching brain-munchers. You’ll need a sawmill for wood, quarries for stone and metal. If you want people, you need homes, and homes need food, which means allocating hunters and fishermen.

Placement of buildings is critical, as hunters and sawmills do better near forests, while fishermen obviously need bodies of water, and so on. But most buildings have an area of effect that forces you to spread them out, meaning you’ll always need to be installing sources of energy and pylons to extend your reach. Which, of course, means extending your borders and walls. But this is an utterly terrifying prospect when actually playing. A little example for you: I had reached around Day 45 of my 150-day target when I decided to remove a section of wall to extend my bustling town. I positioned snipers and rangers in two watchtowers and placed shotgun-wielding soldiers in the breach. I only needed a few minutes – what could go wrong? Well, as though sensing my ballsiness, the horde decided at that moment to attack on three fronts – which it had never done before up to this point. For a few moments I thought I might hold them off, but then a soldier went down, then another. And then the horde hit my dwellings, and for every building that split open like a rotten egg spewing the green vapours of infection, four new zombies emerged. It is frightening how fast the infection spreads, and how utterly powerless you are once they’re inside. The frantic screams of your colonists succumbing to the gnashing teeth and slashing claws is terribly unsettling. Oh, and guess what? There are no checkpoints or saves to reload. When it’s over, it’s back to the blood-spattered, failure-smeared drawing board.

There’s probably a trick to it, though I’ve struggled to find it. My natural lack of patience is not conducive to success despite the time constraints. You have to always be building, researching, advancing, expanding, and defending, because the horde will come at random moments and in random numbers. Sometimes you’ll be alerted to “dozens” of infected approaching from a certain direction, which gives you time to rally your military units, but it’s the individual shamblers that can slip through if you’re not prepared.

As your settlement grows you’ll elect mayors who bring bonuses to resource-gathering or maybe gift you a couple of buildings or free defences, and you’ll construct warehouses and barracks, various workshops to research advanced structures and defences. But the ever-present threat of the horde keeps you on edge the whole time. The best runs I’ve had so far have come from intricate arrangements of walls and watchtowers, steady expansion and always having a military presence, but if you can get up past the halfway mark, it becomes frantic and desperate with frightening regularity. Even the strongest walls can only hold back the flood of infected for so long, and it’s impressively frightening just how many zombies can assail you at a given time. Even in the late game when you’ve got missile-launcher-carrying Thanatos units and steampunk mechs, it’s easy to be completely overwhelmed by the horde. If nothing else, They Are Billions could use just a short tutorial to give you some bearings in its world (something perhaps lost in the early access to PC to console transition process), and I’m sure the PC version has an upgrade tree to help you plan your research along certain lines, which is missing in the console version unless I’m just too stupid to find it. I should also add that it can be a fiddly game to control with a pad. Even when zoomed right in close it can be hard to target an errant zombie behind a wall, for example.

The comic-like art is bold and colourful, and the title screen score conveys a great sense of atmosphere, but neither do anything particularly special and nor do they need to. The hook here is the gameplay, which puts the power in your hands and then delights in making you feel powerless, and which seems to enjoy watching you make mistakes and then punishing you for them. There are no tutorials, no practice runs, just you versus the horde until you see the sun rise on that final day or watch everything burn because you screwed it up.

They Are Billions is a unique and relentlessly tense take on the Civ-Sim and one that will reward any failure with swift and sudden destruction. But it’s a lot of fun, too, and every attempt will see you get closer to your goal, and become more advanced and better equipped. Or it’ll just see hundreds of your colonists ripped apart and infected in front of your watering eyes, while it laughs at you and points.

No tutorials
Can be frustrating
Controlling with a pad isn't great

They Are Billions is a unique and relentlessly tense take on the Civ-Sim and one that will reward any failure with swift and sudden destruction.