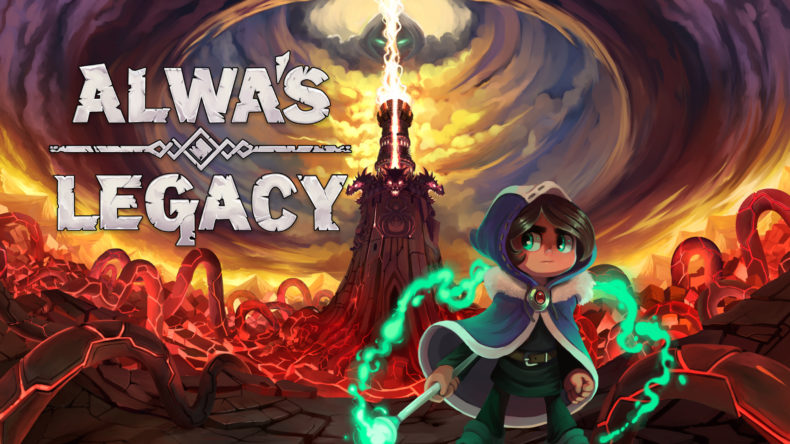 Alwa’s Legacy is the type of no-nonsense arcadey old school title I could see faring quite well on the Nintendo Switch. This is both its greatest strength and biggest weakness. It has enough to keep you interested for the ten or so hours it lasts but you probably won’t think about it much more after that.  Luckily, sometimes, this is all you need.

Alwa’s Legacy’s story is a very basic one. Taking the role of Zoe, a young magical girl suffering from amnesia, you must restore your powers, rediscover your past and defeat the big bad at its centre. Vicar, the big bad in question, is painfully aware of Zoe despite her apparent obliviousness and kicks of the whole awakening part of Alwa’s Awakening. Whilst the story won’t grip you, the rest of Alwa’s writing can be rather great. The atmosphere of being fed tiny bits of information is intriguing and each NPC has a developed character and style. From Mary, the green-haired girl who wakes you up at the start to the rather quirky librarian, characters feel shaped by their environment and express themselves well. This goes from the look to the diction to even the scroll speed at points. 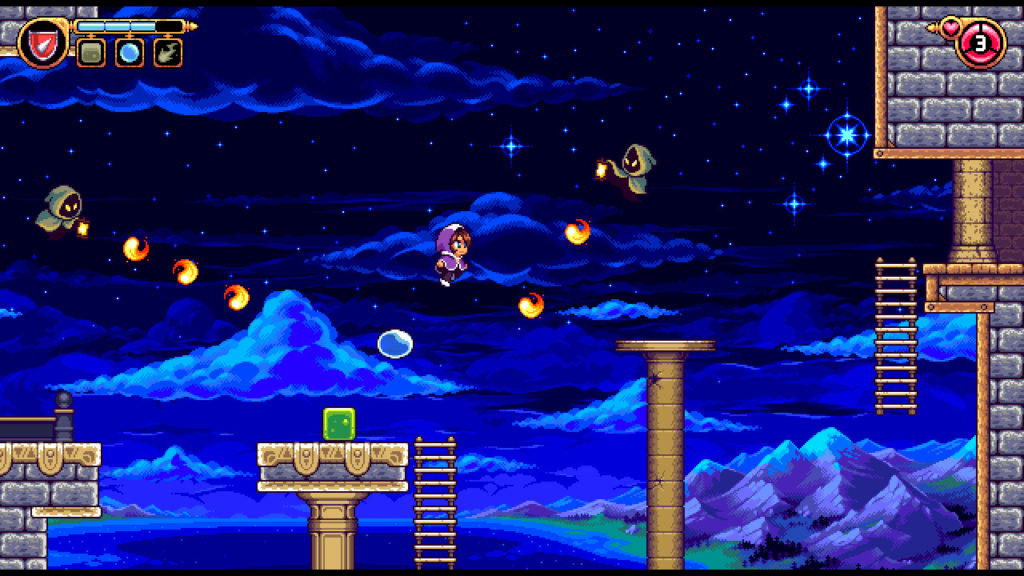 This atmosphere is only made greater by the lovely visuals and strong audio design. Each jump, swing and step feels directly inspired by a classic 16-bit title. The music also follows this trend by making simple yet, ultimately, very catchy “bops” that will stay in your head longer than the story and gameplay will. It blends a classic style with newer drum and synth loops that work well to enunciate the very style of Alwa’s Legacy. Like the music, the foundations of it are inspired by the 16-bit era but it benefits from over 30 years of reflection. This reflection rears its head in the little puzzles and smooth animations. The more you listen and play, the more that style is pushed out looking even further from its starting point.

In a sense, this mirrors the general gameplay structure of Alwa’s Legacy. To put it simply, Alwa’s Legacy is a Metroidvania but it cuts away some of the fat to offer ten hours of constant progression rather than thirty hours of similar-looking corridors. To compare it to Metroid or Castlevania would be a disservice to what Alwa truly wants to emulate. As well as these, there are flavours of Zelda, classic platformers and more.  It opts for intentional dungeon style map structure that gets reshaped with extra information as you make your way through it, much like that of The Legend of Zelda. There’s a central area where you can talk to characters and explore but these split off into very intentional biomes all with unique bosses and spells. This spell-based structure both effects combat and general traversal. 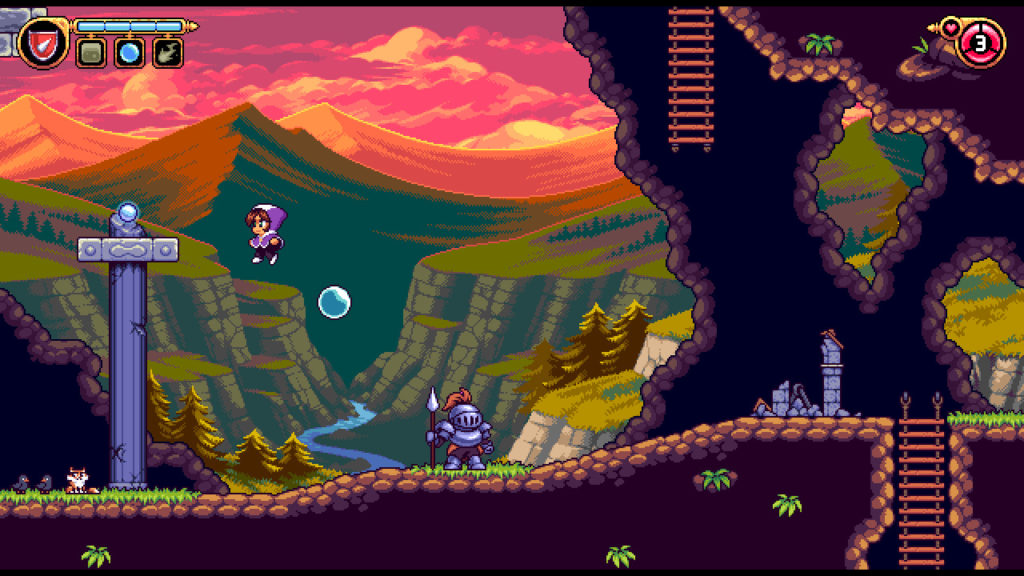 Unfortunately, both combat and platforming aren’t massively strong in Alwa’s Legacy. Jumps don’t feel as tight as they should for a game with a large focus on them and general combat is too simple to get any real joy out of after the first 30 minutes or so. Your best move in most situations is to stand at a distance slightly out of range and swipe until you kill. This is soon replaced as you achieve your third spell and are given the opportunity to mow down enemies at a distance. Combat is changed up fairly regularly with new enemy types and boss battles but the base mechanics never feel any better. The bosses in question are a very good approximation of old school bosses bringing back memories of sore thumbs and learned off attack patterns. Sometimes, they fit a few main phases, sometimes they have screen wipe attacks and most of the time, I died. Time spent dying to poor jumps didn’t feel nearly as challenging or rewarding as dying to bosses. Whilst reasonably consistent, far too many times my character died to a spike they weren’t touching or failed to land an, otherwise rather easy, platform.

Luckily, the puzzles and puzzle platforming helps a great deal in keeping traversal fresh feeling. Later mid-air mechanics that I won’t spoil make general movement more floaty and far more satisfying. This helps as it combines its puzzles with its movement. You can spawn blocks to stand on, blow bubbles to float up and much more I won’t spoil. Usually, these can be used in tandem to get to jumps I didn’t think was possible mere hours beforehand. In a sense, this is the joy of Metroidvanias. They offer a world and mechanics and force you to think in a certain way. After you get used to it, they pull that rug from beneath you with a simple extra skill. This retroactively makes you search through your memory for its perfect use and that is oh so satisfying. 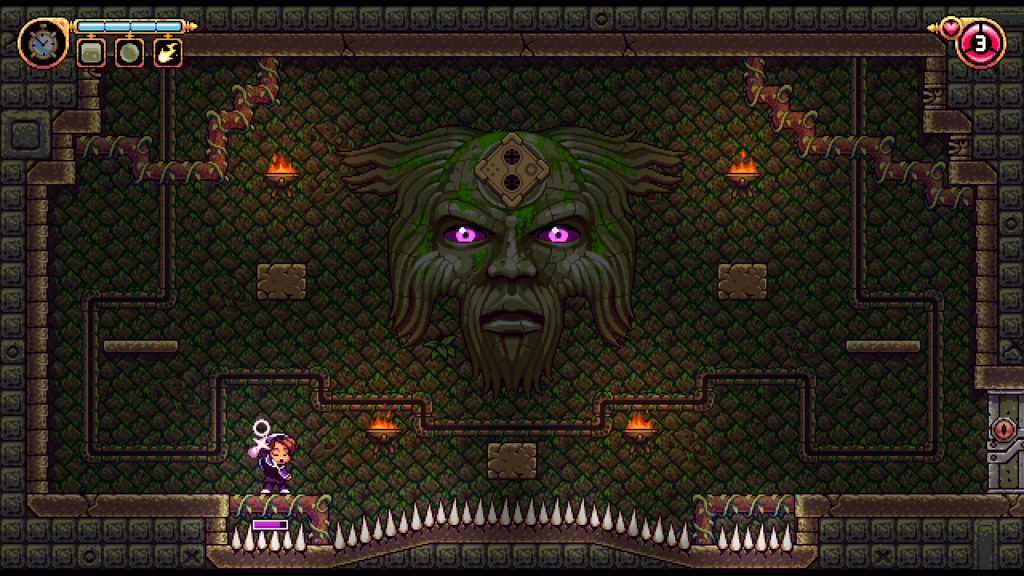 True to this fashion, Alwa’s Legacy plays fast and loose with its puzzles. Most of them aren’t explained and part of the fun is giving them a go without knowing what they are. It occasionally flips around your perspective with gravity, movement and all the spells in your arsenal. These spells can be upgraded via the main areas and a handful of optional blue orbs. Some of its puzzles require these upgrades but running through old levels with an easy solution is a nice way of doing backtracking. Rather than force you to run through the same areas, you can choose to do so in return for possible rewards.

Whilst the comparison can, and will, be made to classic 8/16-bit titles, Alwa’s Legacy’s contemporary sensibilities do more to put it up against modern greats such as Dandara and Celeste. Unfortunately, it doesn’t have strong enough gameplay to live up to either of these and its story isn’t interesting enough to occupy your mind after finishing. Alwa’s Legacy grabs a niche and fits it very well with great sound, good visuals and a nice flow to the overall experience, but doesn’t quite do enough to be much more.

Nothing we haven't seen before
Lacks the edge of modern contemporaries

Alwa's Legacy is a pleasant little game that does a lot of things right, but nothing spectacularly. It's fun, if a little forgettable.