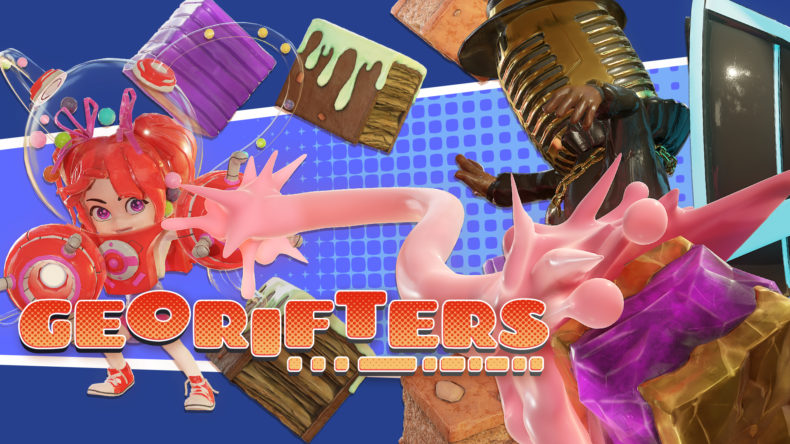 In a world packed with exciting co-op experiences, it can be tough for a game to stand out in the crowded marketplace. There’s something for everyone if you want to play with friends, from rip-roaring adventures on the Sea of Thieves, to serving up delicacies in Overcooked. I probably spend more time playing co-op games than the majority of people, and my partner and I are always looking for new titles to master as a team. Solving block puzzles in Georifters would be our next challenge.

In Georifters, all of the colourful worlds that make up the game are getting flooded by mysterious crystals, bizarre creatures, and dimensional rifts. You’ll have to navigate the blocky levels as one of a selection of wacky characters to discover the cause of these temporal anomalies. The story is just a way to send you adventuring between stages, but is perfectly enjoyable. 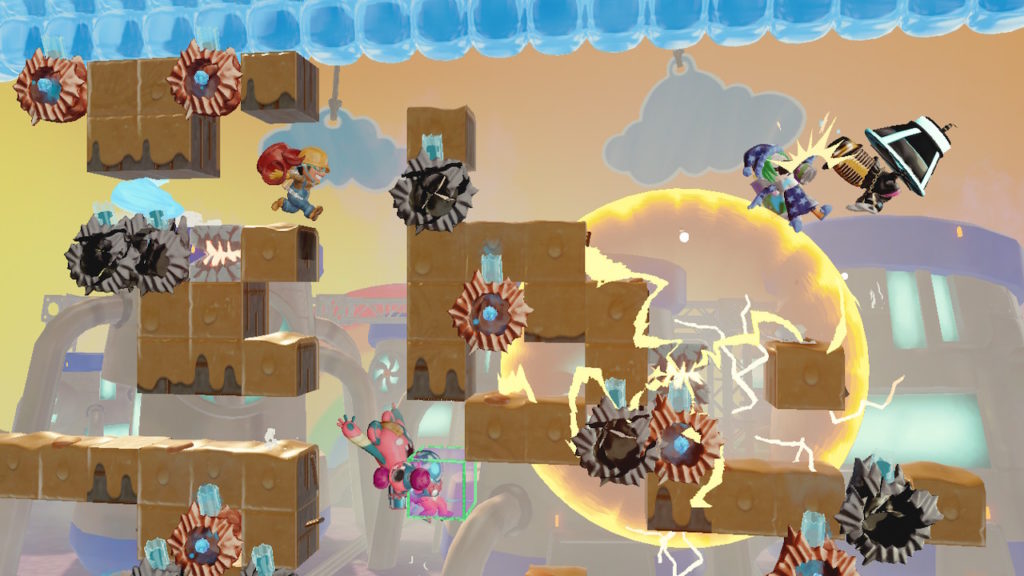 Each level takes place on a single screen, packed full of different types of blocks. To complete a stage you’ll need to make a path to the exit and collect at least one of the crystals along the way. Getting to your objective is easier said than done though, with spikes and enemies like the delightful Buttfly coming between you and success.

Alongside the expected running and jumping you’d expect from a platformer, you also have access to some block manipulating abilities. Every character can push blocks in a straight line, but their secondary powers are all different. The starting character Candy can pull a line of blocks forward with her bubblegum, but others can part a wall of blocks vertically or even reflect them along a line of their choosing. After using this ability 3 times, you’ll need to wait for your battery to recharge, which slows the game down significantly and never ceases to annoy. At its core, though it’s an interesting mechanic, especially when combined with different block types with different properties.

You’ll soon discover that some blocks can be manipulated and some can’t, but as you progress you’ll find more interesting blocks in your path. The damaging block for example may hurt you on contact, but it also destroys any other block that is pushed in its direction. If you want to gather all the crystals in a stage, you’ll have to take advantage of every little square you come across. 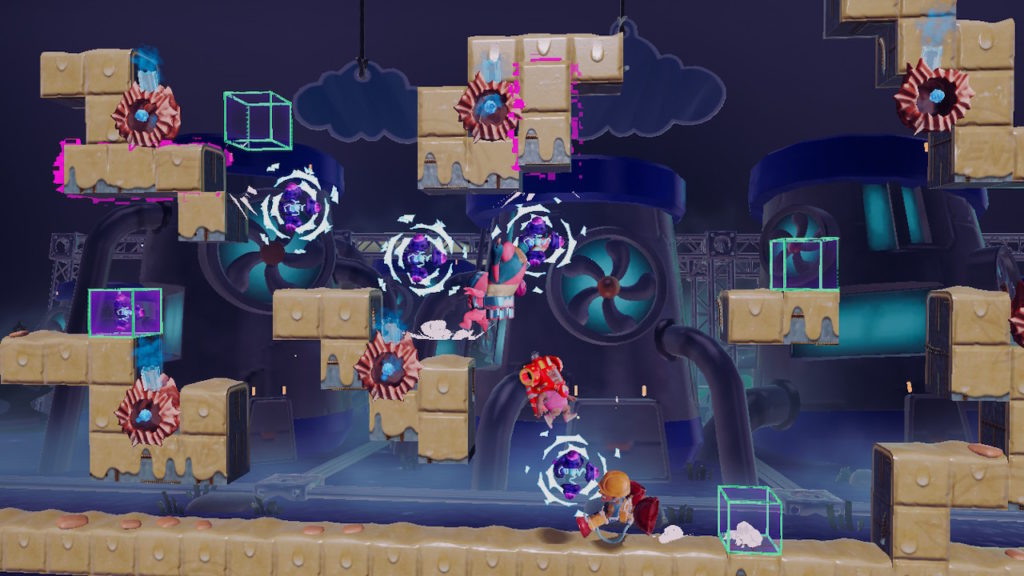 Crystals can be spent in the in-game store to unlock some snazzy skins for your favourite character. Although not essential, they do give you a little extra incentive to grab them all. As you progress you’ll earn points based on your performance, which you can spend to unlock perks that improve the characters’ abilities. There are a ton of options to buff your character, from simple effects like increasing movement speed, to more interesting effects like pushing more blocks at once. It’s nice to be able to shape your best girl Candy (or I suppose another character if you really must) into a more effective block puzzling machine.

The campaign can be played entirely with another player, which I would heartily recommend. The slower pace is made much more bearable with a buddy, and there’s a nice element of chaos when both of you are attempting to move blocks alongside each other. It’s a shame you’re limited to 2 players though, because you’ll need to progress far into the adventure to unlock all the characters to use in the 4 player Battle Arena. 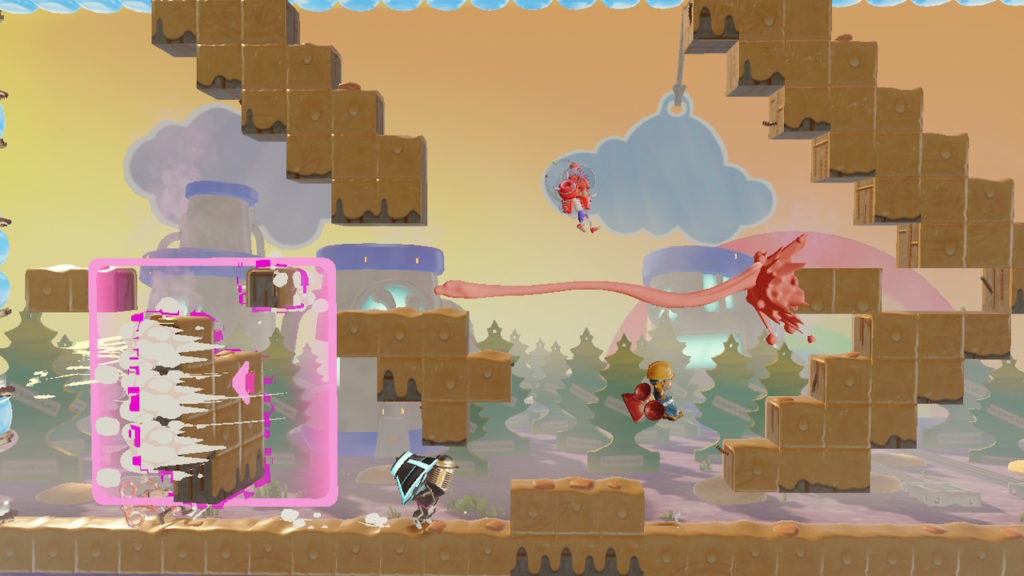 The Battle Arena is definitely the game’s most enjoyable mode, pitting players in a team or free for all contest to collect the most crystals. There is a nice range of weapons available to attack your enemies on the quest for glory, and it’s particularly satisfying to deny a rival points with a well-timed homing missile or stun grenade. You can customise the number of rounds, starting health and stages if you’re inclined, which I definitely appreciated. It’s a shame that local co-op is the only way to play either multilayer mode, because playing with pals is infinitely more fun.

Although not a deal-breaker, it’s worth mentioning that most of the character models in Georifters look particularly rough up close. The colourful aesthetic is definitely a stylistic choice that I appreciate, but it doesn’t make up for the PS2 era jagged outlines. Even in handheld mode, you can definitely see every rough edge on your hero of choice.

Although fun with friends, it’s hard to recommend Georifters to anyone who hasn’t thoroughly exhausted the superior co-op options on the Switch or elsewhere. The Battle Arena is definitely a riot as long as you have buddies locally, but the campaign is slow-paced and the graphics noticeably subpar even in handheld mode.

Powers needing to recharge means the pace is far too slow

Georifters is fun with friends, but it's slow pace and rough character models mean it just can't hang in a crowded cooperative marketplace.