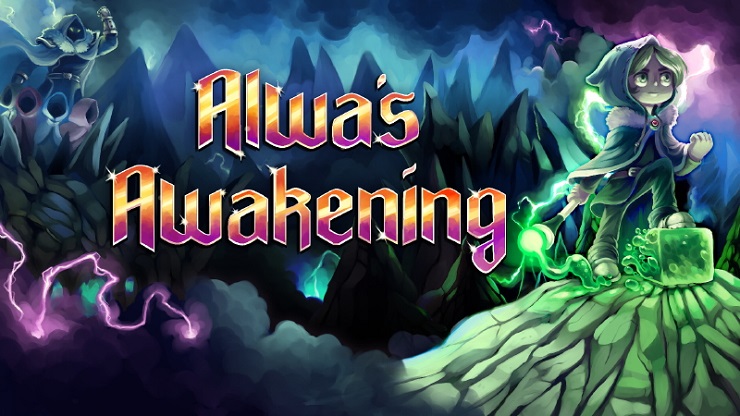 As a kid my family didn’t have a lot of money, so one Christmas when me and my brother got an NES we knew it was something special. Back then, the fact that money was short and that games didn’t come out at the rate they do now meant we played the same games over and over, or we rented them out. Beating DuckTales and Mega Man 2 are two of my fondest memories of those days and playing Alwa’s Awakening brought all of that flooding back.

From little animation details to cracking chip tunes, Alwa is a Capcom-style NES game through and through. There’s little in the way of story exposition barring the small conversations had with NPCs and bosses, and you’re left to explore the map to the extent your skills will let you. The protagonist Zoe can walk and jump as per usual, but in Metroidvania style you collect upgrades to make reclaiming the land of Alwa easier.

Getting around Alwa isn’t as difficult as platformers of yore; it’s challenging, but never unfairly so. Over the course of my adventure I died over a hundred times, but while I felt those deaths were preventable I never felt they were anything other than my own fault; it takes a very focused design ethic to create that feeling and Alwa has it in spades. It does help that death can be a blessing as well; items you collect and doors you open persist through to the respawn meaning that once you’ve acquired something you can die to go back to your previous save point, potentially negating an annoying room or enemy that you’d prefer not to face. Over the course of her adventure Zoe gains the ability to create blocks or bubbles and eventually fire a projectile. The block can be used as a boost up to a higher point and also a shield from fireballs; the bubble can elevate you to even higher points and the projectile….well you fire it at things. These can be upgraded too, with the block eventually being able to float on water and the bubble being able to take you much, much higher. These upgrades are optional, and if you have the dexterity to pull off some rather complicated manoeuvers the regular powers can be used to gain access to the later areas; speedrunners will make very good use of those I am sure.

Alwa’s Awakening is a decent slice of 80s style platforming. It’s not as unforgiving, but that’s probably a little influence of modern videogames. It’s possible that some will get frustrated with the constant need to track back and forth across the games interconnecting locations, there’s one boss in particular who’ll cause a few headaches, and the game’s run time is pretty short; but you get out of it what you put in – just like old times.

It's definitely worth a shot if you’re hankering for a bit of old school platforming action.