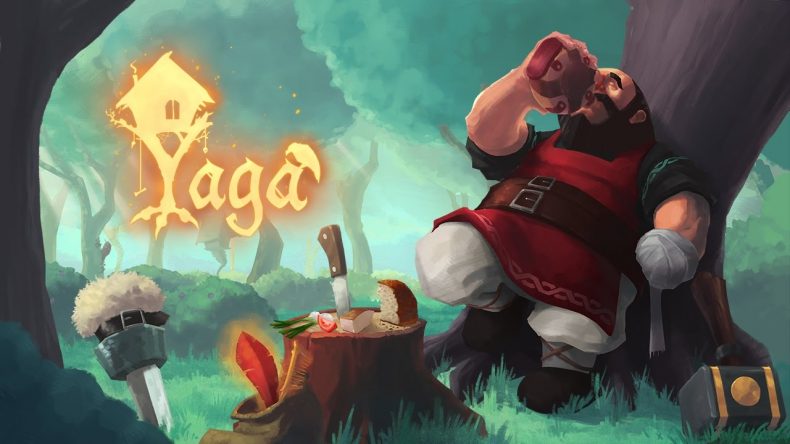 A terrifying and powerful old woman, the Baba Yaga of Russian folklore has been slowly making its way into video games recently. Be it as part of the Rise of the Tomb Raider DLC, or a new character in SMITE – these developers have looked outside of western fairytales to bring something more unusual to their gaming worlds. Romanian studio Breadcrumbs Interactive have taken this one step further, and given the old crone a share of the spotlight in their new Action RPG, Yaga.

You play as Ivan, the village blacksmith and the unluckiest man in the land. Ivan wasn’t always this unlucky, but after his hand was sliced off by the evil creature of misfortune Likho, his life took a turn for the worse. Meanwhile, an evil Tzar receives a curse from the Baba Yaga: he is informed he will lose control of his kingdom due to the actions of an incredibly unlucky man. Thus begins the Tzar’s quest to banish Ivan from his empire, and Ivan’s quest to convince the Tzar he is too powerful to lose his power (with a little help from a certain old crone). The story and characters all feel incredibly original, and the choice of Slavic folklore to inspire it absolutely helps with this. You have the option to choose different conversation options that shape Ivan’s character, but whatever route you take (be it noble and just, or a real goofball) Ivan is a likable protagonist. It’s hard not to relate to his constant misfortune, and his plight leading him to ask for help from the mysterious Baba Yaga means you soon learn more about the legendary figure.

I wasn’t particularly familiar with the character of the Baba Yaga before joining Ivan on his adventure, and found her a particularly fascinating part of the game. From her grey sense of morality, to her hut that walks around on huge chicken legs, Yaga made me long for more games exploring the bizarre world of Russian fairytales.

The charm of Yaga is only inflated by its wonderful art style and traditional Romanian soundtrack. The art is equal parts beautiful and disturbing, and it’s actually incredibly rare to come across a character on your quest that doesn’t have some sort of hideous deformity. The environments offset this with some truly gorgeous outdoor spaces and pleasing colour palettes. Ivan’s journey isn’t all about taking in the scenery however, as there is a plethora of humans, animals and monsters that all want to put the blacksmith in the ground. The combat is very active, and involves a lot of dodge rolling. Ivan begins the game with his trusty hammer, but gains access to an array of subweapons along the way. All of these take stamina to use though, which acts as regenerating health – and you soon learn that rolling and hammer throwing is the best option for practically every encounter. Unfortunately, this gets very tedious very quickly.

One of the most unique systems in Yaga is the luck mechanic. Ivan’s bad luck is more than just a storyline element, and many actions trigger some pretty nasty consequences. Receiving a combat blessing, acting out of character in a conversation, or even eating bread (?) will cause your bad luck meter to build rapidly. The result of this is almost always that your carefully crafted weapon will break on the spot, which is beyond aggravating. There is rarely a way to avoid bad luck, as often your ‘reward’ for completing a side quest will end up being a blessing of some sort. Because of the infuriating luck system, its very difficult to get deeply invested in a lot of Yaga’s other mechanics. Using your trusty blacksmith’s anvil, any weapon or tool can be crafted out of ore and additional items to provide advantages in combat. Each new weapon looks entirely different (and usually pretty awesome) based on the ore used, but this doesn’t matter because it will usually break within a few minutes of crafting with absolutely no way to prevent it. The only items immune to breaking are the base items, so the sooner you accept that they’re all you’ll be using the better.

I really wanted to fall in love with Yaga. The world and character of the game is just incredible, but it’s hard to overlook the gameplay. The tedium of repetitive combat and the baffling bad luck mechanic detract so much from such a promising RPG, and it feels awful to be punished for exploring the crafting system. Ultimately, Yaga’s visual and narrative charm just don’t make up for the boredom and frustration you’ll have to put yourself through to see the story to its conclusion.

The amazing theme and artwork just can't carry the lackluster gameplay of Yaga. The frustrating luck system affects so much of the game, and it's hard to get invested in the crafting when your weapons just keep breaking.