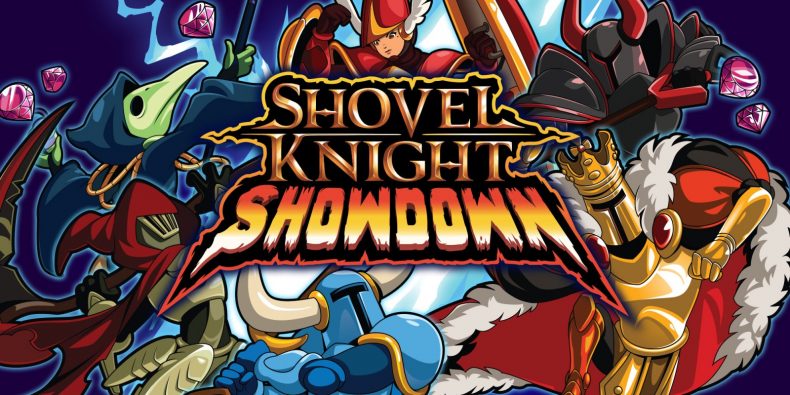 Fighting titles comprising of characters from strictly non-fighting genres often feel like the ultimate fan service. Idiot younger me, for example, thought Super Smash Bros. back in the 90s was a shameless cash-grab that would never take off. Older now, and perhaps a little wiser, I’m in a similar place with Shovel Knight: Showdown. Despite its retro style, it bears more than a passing resemblance to Nintendo’s famous brawler. It’s the final addition to the Shovel Knight: Treasure Trove collection and sees familiar characters from the series battle it out for supremacy on 2D platform stages.

Each character will technically have their own set of moves to use in battle. However, parries, short-range attacks, and long-range missile attacks are all present across the roster. And it’s clear right from the off that different strategies are required to get the most out of each character. Shovel Knight himself, for example, favours attacking from above with his downward shovel move. King Knight, however, adopts his movement from Shovel Knight: King of Cards with much more fluid, horizontal Shoulder Bashes and graceful swirling bounces.

Victory depends on the game mode; sometimes you’ll be in a stock battle with a set amount of lives, in a true last Knight standing affair. Another mode in keeping with the Shovel Knight world sees you collecting red gems from around the arena. Killing opponents sees them drop a gem for another player to steal. The winner is the first one to accrue the allotted amount, adding a tactical element to simply knocking each other senseless. Your game time will be split between your standard local multiplayer battle mode with the characters and arenas you have unlocked, and the single-player Story mode. The story mode again embraces a similar Classic Mode from the Smash Bros. series. Bouts are lined up for you to complete ahead of a final boss fight. These could be one-on-one fights or team battles, based on either stock or gem collecting criteria. Three different difficulty modes allow fighters to try out new characters and strategies with ease. However higher difficulties will still offer a significant challenge to those with hours of fighting under their belt.

Progression is, unsurprisingly, through repetition. But the traditional “feat” system of the series has been given an overhaul to better suit the Showdown gameplay. In other Shovel Knight games, Feats would be undertaken by those who have finished the main adventure and were up for additional challenges. Finishing the game without jumping or within a strict time limit was not uncommon. Achieving these few specific feats felt like significant accomplishments. Here the list of Feats has increased significantly and they are linked to the many unlockables in the game.

For example, you start with a paltry 8 characters to choose from, but there are plenty more to unlock, as well as new stages to battle on. Feats for finishing Story Mode with certain characters or completing character-specific mini-achievements will unlock various rewards. Chances are a successful Story Mode campaign will result in a couple of new unlocks for you to enjoy. This gives the single-player purpose, and the Feats can be tracked and checked at any point from the main menu. This means you can always see what you need to do for a new reward. The biggest problem, though, is the characters and move-sets were designed for a platform fighting environment. Shovel Knight: Showdown is clearly meant to be an additional, fun mode with Shovel Knight characters. However, that means the fighting execution is somewhat compromised. The movements were designed for careful planning and platform traversal. Now those same inputs are being used to try and quickly outmaneuver erratic foes. As such your options feel limited and restrictive at times. And whilst I understand the comparisons to games like Smash Ultimate are unfair, I sorely missed the different options at my disposal to deal with different situations.

In addition, to be true to the series, there’s a knockback animation when any character is struck. You’re invincible during this, meaning you can’t be juggled and beaten to death, which is a positive. However, there’s nothing more frustrating than being hit, and then flying off a ledge into a pit or lava. You’ll end up losing a precious stock or gem you’ve collected. It feels cheap, and there’s nothing you can do to counter it. I felt out of control at these points which feels at odds with a game that should be flexible and responsive during the battle chaos. True, there’s an argument to be had for “gitting gud” and learning the characters and how to deal with situations. But that dedication in a local multiplayer will see you become “that guy” that’s mastered everything. Nothing ruins a Friday night session on the sofa with some mates and a few beers quicker than someone like that. Shovel Knight: Showdown as a multiplayer game, then, that feels better utilised as an impromptu party game, but then it’s just a shame that there are so many feats to go through to unlock all the content.

This leaves Shovel Knight: Showdown in an awkward place. Despite being a multiplayer title, the most consistent fun is probably found in its single-player Story Mode. Completing numerous feats is rewarding, as is trying out new characters and stages. The battle action is decent, but with move-sets better suited to platforming, often characters feel clunky. You’ll be longing for more options in the heat of battle, and those cheap deaths from being flung into pits will always irritate. It’s not terrible by any means, and treated as a sweetener on top of the amazing content in the Shovel Knight: Treasure Trove collection is when it will be most appreciated. It’s just unlikely to be something many people return to again and again.

Shovel Knight: Showdown is a good idea that fans will enjoy in brief bursts. But the restrictive movement options prevent it from becoming a great example of the genre.