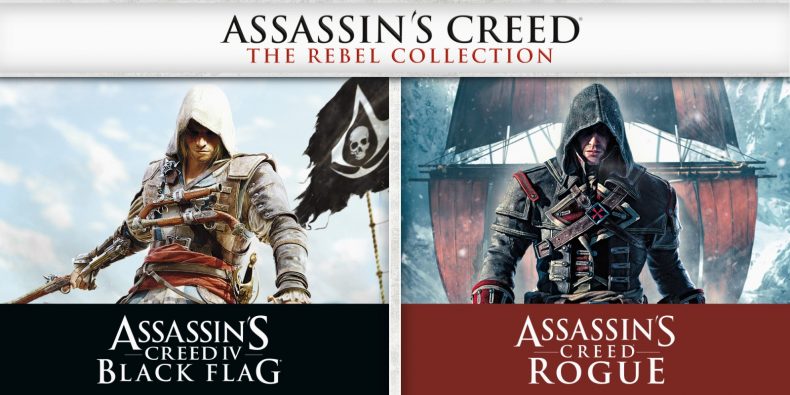 Assassin’s Creed IV: Black Flag remains, to this day, my favourite of the series. I enjoyed Brotherhood, loved Syndicate, and spent hours and hours on Odyssey, but Black Flag’s focus on high seas hijinx in the Golden Age of Piracy still holds a special place in my heart. For me, the Creed games live or die by dint of only two things: their protagonist and their setting. I can overlook a multitude of gameplay sins and iffy design choices if I’m swept along in the adventure, which is telling considering my favourite entries focus less on the assassinating and more on things like pirating, leading gangs, and fighting mythical creatures. In short, I don’t much care for the increasingly forced modern day stuff or the actual Assassin versus Templar conceit.

The port included in Assassin’s Creed: The Rebel Collection is my third time reviewing Black Flag, and very little has changed. The Switch port lacks some of the graphical polish of the PS4 and Xbox One versions, sure, but it appears to maintain a solid 30fps, and looks pretty impressive in 720p on the Switch’s smaller screen. Cracks begin to show when playing docked, but it’s nothing that ruins the experience. There’s a sense of pure adventure in Black Flag that’s unrivalled by any other entry, as you take Welsh Heath Ledger lookalike Edward Kenway on a journey of exploration and redemption across the Caribbean, meeting legendary pirates such as Blackbeard, Anne Bonny, “Calico” Jack Rackham and Charles Vane. These are historical figures, yes, which is nothing new in a Creed game, but the near mythological status of each is such that you feel a greater sense of wonder working with these guys and gals than you did working alongside the likes of even daVinci or Thomas Jefferson.

Kenway is one of the more likeable protagonists to grace the series, too, his roguish charms making him a kind of lovable dick whose poor decisions are counterbalanced by a quick wit and dry tongue. It’s also helped by a great cast of supporting characters like Anne Bonny and Adewale, Kenway’s first mate whose standalone DLC (Freedom Cry, included in this collection) is one of the best pieces of extra content Ubisoft has ever created. The ship battles and plantation raids are highlights, but you can also lose yourself searching for lost treasure and exploring sunken wrecks, or chasing shanty pages through the streets of Havana and Nassau.

It’s not without a few issues, such as a midpoint that forces you to grind through it in order to be able to face the suddenly overpowered enemy ships, or the parkour which suffers the classic Creed problem of being all over the bloody shop all the time. But the story, the characters, and the setting carry it through. Assassin’s Creed: Rogue, on the other hand, can only really count on the setting. It wastes no time in aping Black Flag, throwing you back into the familiar environments and putting you in charge of your own vessel super quickly, but it’s not quite enough here.

Protagonist Shay Cormack is just awful, and his Irish accent is so bad that I found myself hating him more and more every time he spoke. While he’s essentially the same as Kenway in how he handles, he’s just not as likeable. Why Ubisoft couldn’t have just hired an Irishman to play him is beyond me.

The story of Rogue is interesting though, offering up a bit of a departure from the norm by having Shay turn against the Assassins and side with the Templars, hunting down his former brethren. Its nice to see the usual plot turned on its head, but Rogue still feels like an also-ran entry designed solely to capitalise on Black Flag’s sea-faring gameplay. The port of Rogue looks somewhat ruddier, too, as does the Aveline DLC that features the superb female protagonist of the PS Vita spin-off, Assassin’s Creed: Liberation. It’s not as clean, clear or detailed as the Black Flag port, but it’s not entirely bad, either.

Interestingly, this port boasts a few Switch-centric features, such as HD rumble, and motion control for aiming your ranged weapons. There’s also touchscreen integration, which sounds obvious but is something a lot of Switch ports don’t bother to take advantage of.

Had this been a simple port of Black Flag and Freedom Cry, I’d have been over the moon, so getting Rogue and Aveline along with it, as well as a handful of extras such as the anime, comic and companion novel, feels like a massive bonus. Kenway’s adventure may be the main event, but for fans of Assassin’s Creed who only own a Switch now or who simply want a reason to play these games again, this is a lot of game to sail through. For anyone who never experienced Black Flag, or indeed the series as a whole, this is well worth the price of admission.

For fans of Assassin's Creed who only own a Switch now or who simply want a reason to play these games again, this is a lot of game to sail through. And for anyone who never experienced Black Flag, or indeed the series as a whole, this is a great entry point.