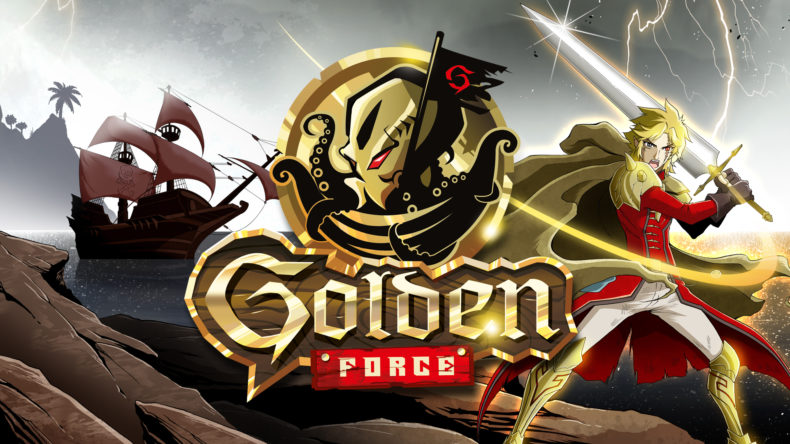 All the best things in life are golden. Whether it’s jewellery, a goofy Golden Retriever or popular RPG series Golden Sun, Gold is clearly the best colour. You might think that adorning yourself in golden trinkets is a little tacky, but as I sit here typing this review on my phone nestled in its Rose Gold case I won’t be convinced of that. Hoping to be added to the list of great gold things is Golden Force, a new 2d action game from Storybird Games.

While aboard The Golden Boat, our heroes find themselves in need of cash. Setting sail for adventure, they plan to take down The Great Demon and plunder his gold. That’s all the motivation you’ll be getting, so it’s time to choose if you’d rather be a dragon with an axe, an old man with robot arms, or a Shantae lookalike as you battle monsters and line your pockets. They’re all mechanically identical, but it nice to be able to choose how you look as you loot some cash. 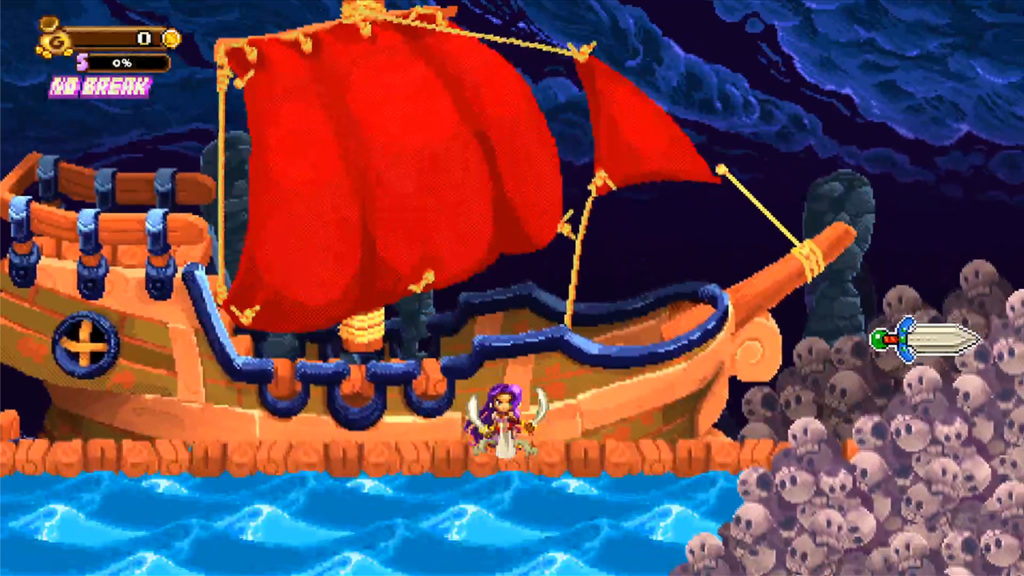 To get to The Great Demon, you’ll need to make your way through 4 islands of hazard-packed stages. To get from one end to the other you’ll have to navigate platforms, dodge spike pits and slash your way through arenas of monsters. Each level has plenty of chests full of money to find, as well as 3 secret coins and a seashell if you’re a completionist. Finding hidden nooks that you’ll need to dash to, or switches that activate with a well launched enemy, are very satisfying.

You’ll need to learn to use your array of attacks if you want to survive against the demons. As well as a basic attack, you can launch enemies upwards, dash through them, or even send them bouncing around the screen to damage themselves and others. Once you get into the flow of combat it’s fun to dash from monster to monster dodging attacks and keeping your combo meter going, especially if you want a good score at the end of the level.

There’s an impressive selection of baddies to dispatch as you make your way from one island to the next. Some fire projectiles you’ll need to hit back, some drop in their allies for back up, and some just have a ton of health and a mean streak. Learning how each enemy is planning to end you is an important part of staying alive, and looking out for tells is a necessity if you want to dodge an incoming shock wave. 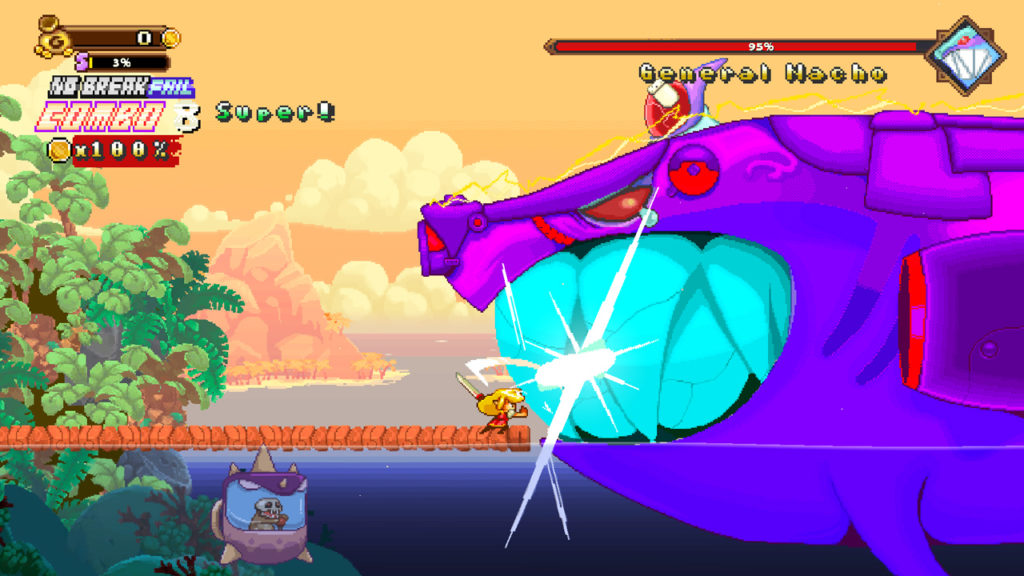 The stars of the show in Golden Force are the incredible screen filling boss encounters. Each island is defended by one of these monstrous foes, and it takes hard work and perseverance to beat any one of these multistage battles. Whittling down every last percent of their health bar doesn’t come easy, so be ready to learn some attack patterns and die a dozen times before moving on to the next world.

It’s unlikely you’ll make it through the trials and tribulations of the stages without pumping that hard earned cash into some upgrades and items from the store. The secret coins and seashells are the most important for this, as you can swap them for extra hearts and a longer attack combo respectively. Regular coins buy more fleeting buffs, like an ice power that freezes enemies you attack or double damage, that you can use mid level in a pinch.

Ultimately it doesn’t matter how often you frequent the store, you’re going to die a lot. Golden Force is an unashamedly hard game, and if you lose all your health its back to a checkpoint or the start of the level. The checkpoints aren’t nearly regular enough, and there were stages that I had to restart multiple times after more than 5 minutes of gameplay. There’s no getting around it and it feels bad to get sent back so far every time it happens, especially when instadeath spikes are added later in the game. 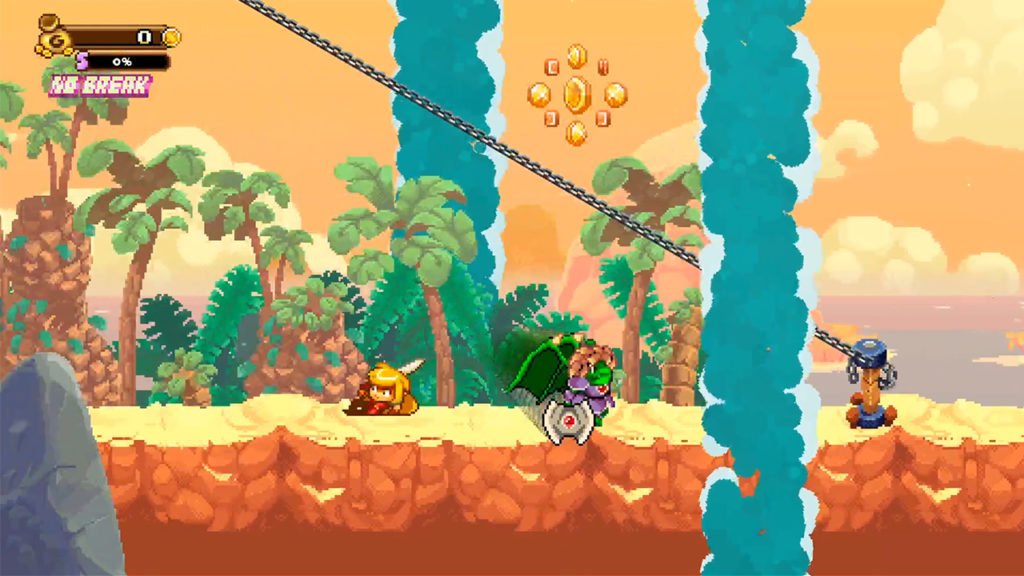 If you need backup, you can switch to co-op mode any time and bring a buddy with you into the action. It’s local only, but having a second person makes the game much more manageable and can be played with single joycons on Switch.

Storybird Games have made a really nice looking game with some gorgeous pixel art, especially on larger enemies. It is however unfortunate that this style comes at the expense of the frame rate in busier areas. It doesn’t happen too often and rarely effects the gameplay, but I did end up using my crush attack to send enemies flying less to avoid it as much as possible.

Golden Force is a very entertaining 2d action adventure that’s well worth playing if you’re able to handle its punishing difficulty. The variety of enemies is ideal and the platforming is great, but there’s no denying that being forced back to the beginning after one too many hits is frustrating. There’s plenty to love though, and as long as you have the patience to handle some retro style retries, you’re Golden.

Golden Force is a fun and varied 2d action game, but you'll need a lot of patience to overcome its challenging difficulty.