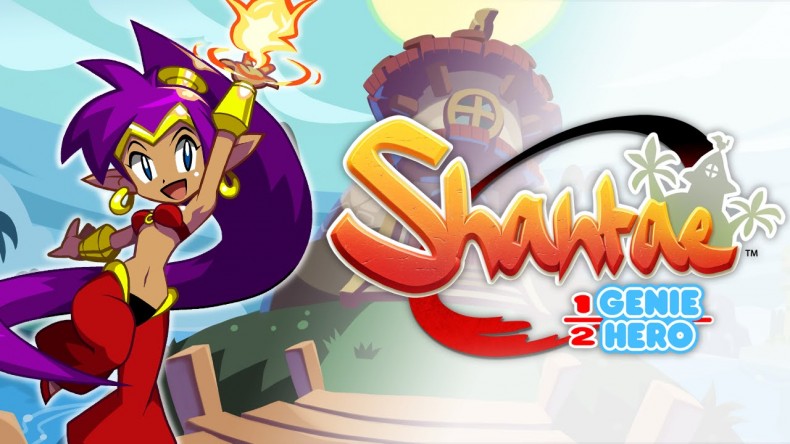 There are always franchises I see mentioned, related to genres I enjoy playing, that I haven’t had a chance to try myself. One of these franchises is Shantae, which has eluded me until now. My time with Half-Genie Hero has been so enjoyable that I’ve already bought Risky’s Revenge and Pirate’s Curse. It is that damn good, and one of my favourite platformers in a while.

You play as Shantae, a half-genie who wakes up and finds herself in a secret cave. You are warned that evil is coming. This leads to you explore the small settlement of Scuttle Town, where the lush visuals of Half-Genie Hero begin to blow you away–everything is so smooth and lovely. Your aim is to help your Uncle build a dynamo with parts that are scattered across various locations–all of which form the basis of the numerous stages you must play through, and the stunning environments that you will encounter. Shantae isn’t just some generic platformer protagonist though. She whips people with her hair and dances into various forms with the press of a button. There’s a relic system in place letting you tweak gameplay further as well. Each level has its own set of secrets that sometimes require revisiting in order to unlock even more transformations. This adds replay value but also means backtracking, something which I’m not a fan of. Shantae doesn’t just use her hair though. You can buy spells and various other upgrades using gems at the item shop in the main hub to make gameplay more exciting. Boss fights are also fun, and have interesting mechanics at play. The grandness of each one make boss fights enjoyable, albeit frustratingly difficult in some cases. The aesthetic style for bosses and their animations are fantastic, however.

Speaking of aesthetics, this is Shantae’s first adventure built for HD from the get-go. A lot of retro-style games lose some of their charm during the transition to high definition. Half-Genie Hero is beautiful, and performs great on both PlayStation 4 and Vita. The great idle animations are icing on the cake.

Music is very important in games and the soundtrack here is catchy and one that you will want to listen to after completing your adventure. Jake “virt” Kaufman composed the score for one of my favourite games of all time with Shovel Knight, and his work in Half-Genie Hero is equally exceptional. The voice acting is also great but I wish there was more–it’s unfortunate that WayForward couldn’t meet the full voice acting stretch goal for this project. I’m even sadder that I had no idea about this game during its initial funding period, otherwise I would have backed it. WayForward has made quite a name for themselves with this franchise online and I finally see why. Half-Genie Hero has enough depth to satiate hardcore platforming fans, but is also accessible enough for anyone to just pick up and play. The dialogue delivery and writing deserve a special mention. I even love that the main hub even has a bath house that has someone offer hints if you’re stuck.

Shantae: Half-Genie Hero is a must play for any fan of 2D platformers. I’m glad XSEED decided to do a limited retail release for this because it more than deserves it. It may have released near the end of 2016 but you’d be doing yourself a favour by starting 2017 off with Half-Genie Hero.

Voice acting, while great, is too little

Shantae: Half-Genie Hero is an easy recommendation to any fan of the genre with its lush visuals, memorable soundtrack and varied environments, making it one of the best 2D platformers of recent times.