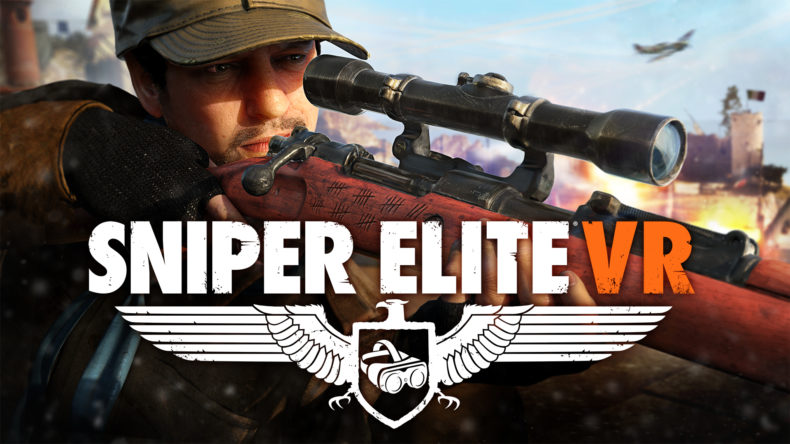 Part of the reason I prefer “contract” type sniper games is because I don’t necessarily need story to enjoy long-distance murder. Narrative has its uses for sure, but not when it acts as an impediment to me perforating dudes in glorious slow motion. I have a few complaints about Sniper Elite VR, and that might be the biggest one.

It’s storytelling is fairly clumsy. While I commend Rebellion for bothering, the issues arose early. As the game opens, your Italian sniper is reminiscing about his past, watching a family cavort in their garden while reminding us that, no matter how cool a slow-motion kill-cam is, war is hell. Only I’m not listening. Like, at all. Instead I’m faffing with the stuff in front of me, wondering if I can pick any of it up and throw it at the family. Not out of malice, but because that kind of thing is cool. Sadly I can’t, and by the time I’ve come to terms with it, the tableau is fading and the scene is seguing into some military base or another.

Now I’m in more familiar territory. Things are exploding, people are running. As I fumble with my rifle I half-hear the word “tank” and my ears prick up like a dog hearing the word “walkies”. Unfortunately, the opportunity to one-shot a Panzer from the nearby rooftop does not present itself. Obviously Sniper Elite VR thinks I came here to sight-see. It’s fine. There’ll be heads to pop later. 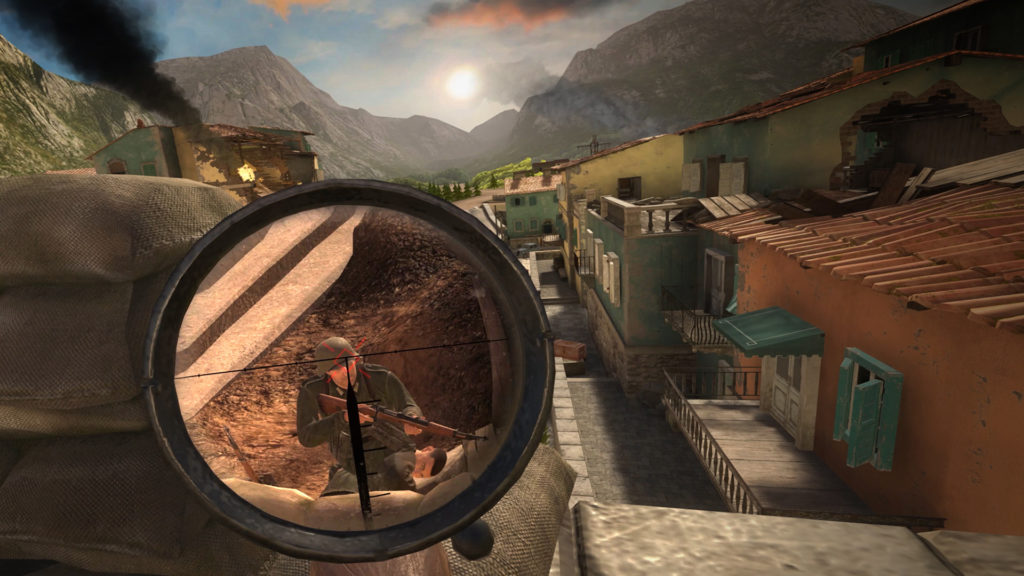 Sure enough, it’s not long before my prayers are answered. After roughly four attempts I grab the handgun the game offers me with the air of a man who has a burger in one hand but must also burden himself with celery. I also follow the on-screen instructions on how to load my rifle, and learn that I must chamber a round between each shot on this particular gun. I will then proceed to forget this fact every three seconds for the next forty-five minutes.

Anyone who has played a sniper game in VR will know that it’s not easy. You can’t correctly triangulate the rifle without a solid grip, and so achieving a steady hand is about as likely as slicing the top off an egg while on a rollercoaster. Instead, you have to rely on the fact that you can squeeze the left trigger to enter Focus Mode. This slows your character’s breathing, forces the reticule to move less, and allows you a better chance to hit your target.

My biggest problem with the shooting in Sniper Elite VR is that immersion simply goes out the window. I played on Oculus Quest 2, and whenever I automatically crouched with my real legs, I’d lose vision or find myself stuck in my own ammo belt. Instead you have to push a button to crouch, which isn’t the end of the world. Much more of a problem is that when I brought my hands up to a point that the imaginary rifle felt somewhat comfortable, I’d lose vision down the sight. I was constantly compensating for this, which ruined my enjoyment over and over again. 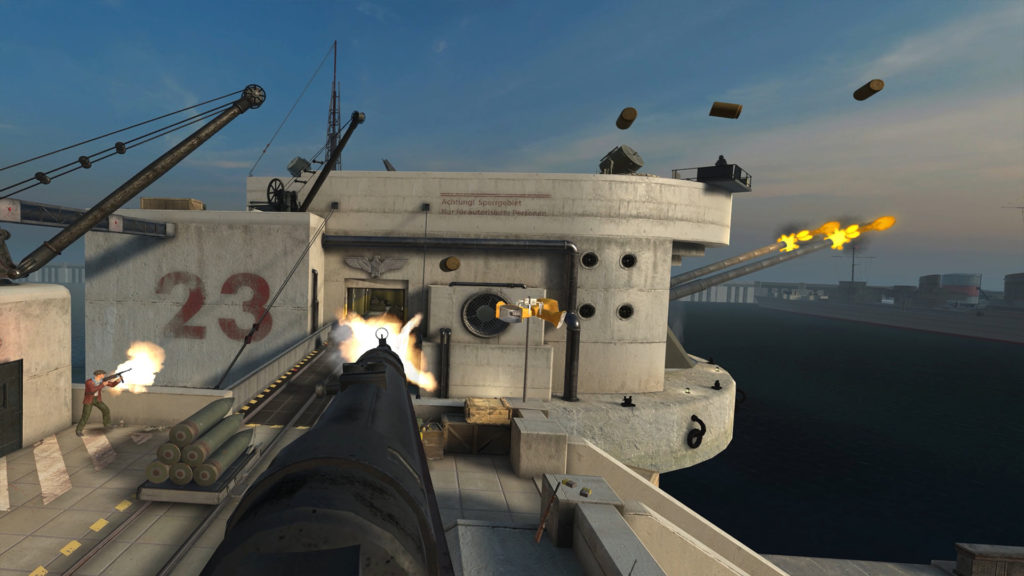 I hasten to course-correct this review before you begin to think I didn’t like the game. In actual fact I really enjoyed a lot of it. Nailing a long distance shot is an exhilarating feeling, especially as there’s an option to leave bullet-tracking on. And yes, that means if you want to shoot a Nazi directly through the spleen and follow the bullet’s entire journey like you’re an unlucky fly with a high calibre round stuck up its arse, you can. Really, the narrative becomes less and less important in direct parallel to how competent you become with the rifles. You just don’t need it. All you’ll want to do is get back out there and snipe. If you want to turn the accessibility options off and contend with wind resistance and bullet drop, etc, you can do that too. I didn’t, because I have the hand-eye coordination of a drunk gibbon.

That said, it becomes irritating every time Sniper Elite VR stops you sniping and makes you shoot people with handguns and machine guns. I’ve played plenty of VR games with shooting mechanics, from Arizona Sunshine to SuperHOT to Pistol Whip. I know how satisfying it can be to put virtual holes in virtual heads. Sadly, unless you’re sniping, Sniper Elite VR misses the mark more often than not. Other weapons feel imprecise and sluggish, and don’t even bother with the melee attack. As a result, any time I had to indulge in close combat I got really apathetic towards the whole experience. 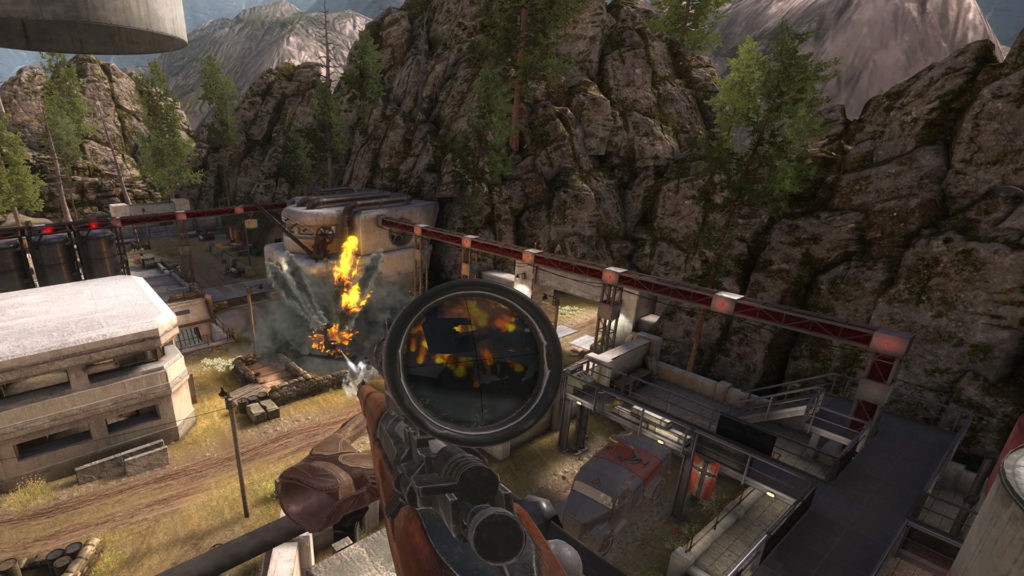 I will commend the comfort options though. As someone who gets motion sickness from walking to the loo too quickly, having the option to teleport and snap-turn was a plus. You can also play the whole game sitting down if you want to, though try to avoid slamming your head down on the desk when you instinctively duck a tank round. This hurts almost as much as an actual tank round in the face. Believe me.

Graphically, Sniper Elite VR does a decent enough job. Obviously you’ll have a better experience on Rift than on Quest, but it’s not awful either way. Textures are a little feathery and the level of detail is low, but the important things are there. The slow-motion Nazi kill-cam, for example, is still great. Ultimately, Sniper Elite VR has the goods where it counts. If you can find the right level of comfort or, perhaps, the right position, the sniping is very good. Moving through the stages is easy regardless of your preferred comfort level. And it’s exciting.

Popping up to nail that perfect shot while bullets click-clack off the wall by your face is thrilling. Hitting the perfect trajectory to smash another sniper’s eyeball to mush like that one bit in Saving Private Ryan is excellent. It’s just a shame that any time you’re not actively sniping, you’ll be really, really wishing you were.

Easy to break immersion
Everything but sniping is lacking

Ultimately, Sniper Elite VR has the goods where it counts. If you can find the right level of comfort or, perhaps, the right position, the sniping is very good.