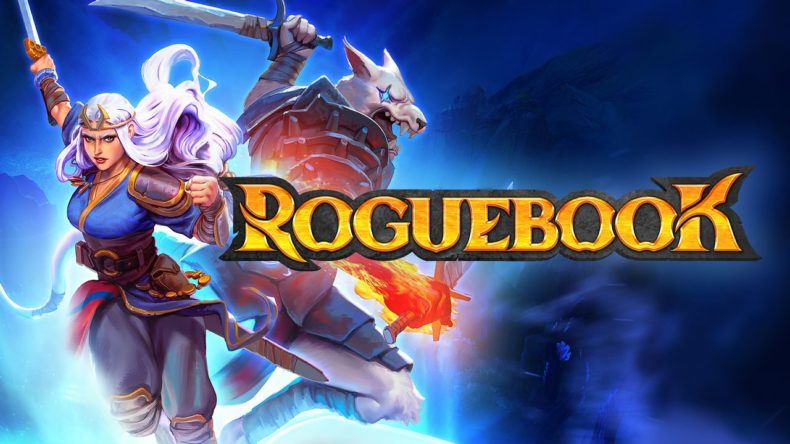 I’ve never really gotten my head around deckbuilders. I’ve played a few over the years, like Hearthstone, Gwent, and Slay the Spire. But the simple truth I’d rather not admit is that I don’t have much of a head for tactics. I’d rather arm wrestle than play chess. Roguebook seems to be aiming closer to the middle ground between strategy and strong-arming, though it still remains much closer to the former.

Abrakam Entertainment are better known for their Faeria series, which in fairness isn’t a far cry from what’s on offer in Roguebook. But here, there’s a definite sense that Abrakam have taken what they know and attempted to apply a degree of newness. A lot of it works, but some of it doesn’t.

The roguelite element may not be wholly fresh, but it works wonderfully well alongside the card collecting element. You’ll find artefacts that carry forward through runs, level up your deck to give you more action points to play with. Of course, you’ll pick up new cards as you play, and new decks in the form of playable characters. 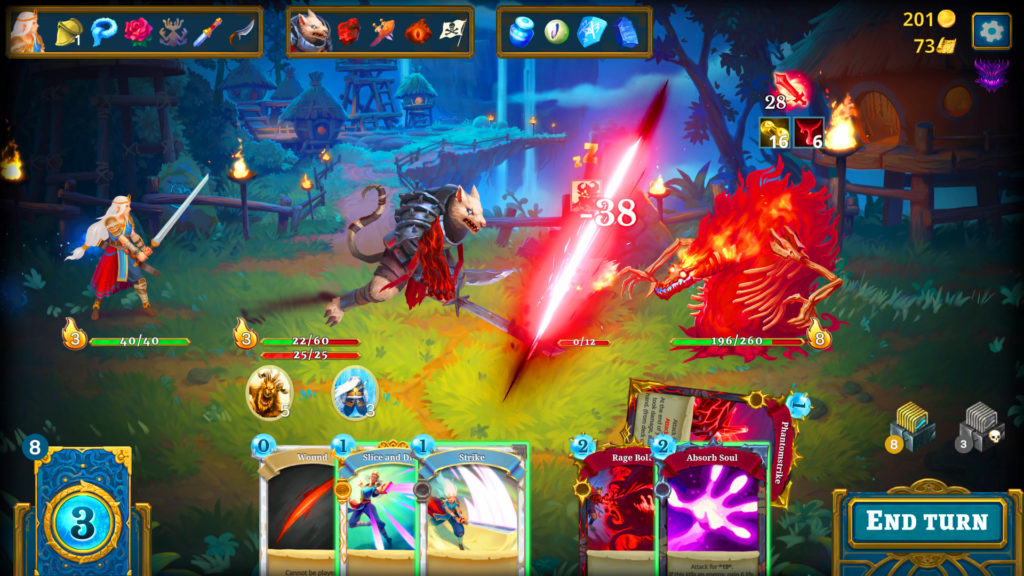 You begin with Sharra and Sorocco. The former is the white-haired warrior that graces all the art; the latter is a frog-like ogre. Each has their own deck based on individual attack types. For example Sharra is fast, deals heavy damage but can’t mitigate it well. Sirocco is tougher, with more defensive cards in his hand. In order to defend against an attack, you’ll need to play a defensive card with the character in the lead.

There are, of course, lots and lots of cards. Some allow you to hit multiple enemies, others only trigger as counter attacks. Enemies deal damage to the character in front, so a miscalculation can leave a vulnerable character exposed. As you play through the story, two other characters will join Sharra and can be selected to accompany here instead of Sorocco. You can’t switch out during a run though, so be prepared before you begin. The only external help you’ll get comes in the form of summons. These will apply various buffs or aids but can’t be used like the main characters.

Roguebook makes you think, that’s for certain. It may not be quite as complex as some deckbuilding games, but it has enough elements that you won’t feel cheated out of a challenge. Learning when to risk an attack and when you need to block is the toughest aspect early on. That said, you’ll spend as much time exploring the map as fighting on it. 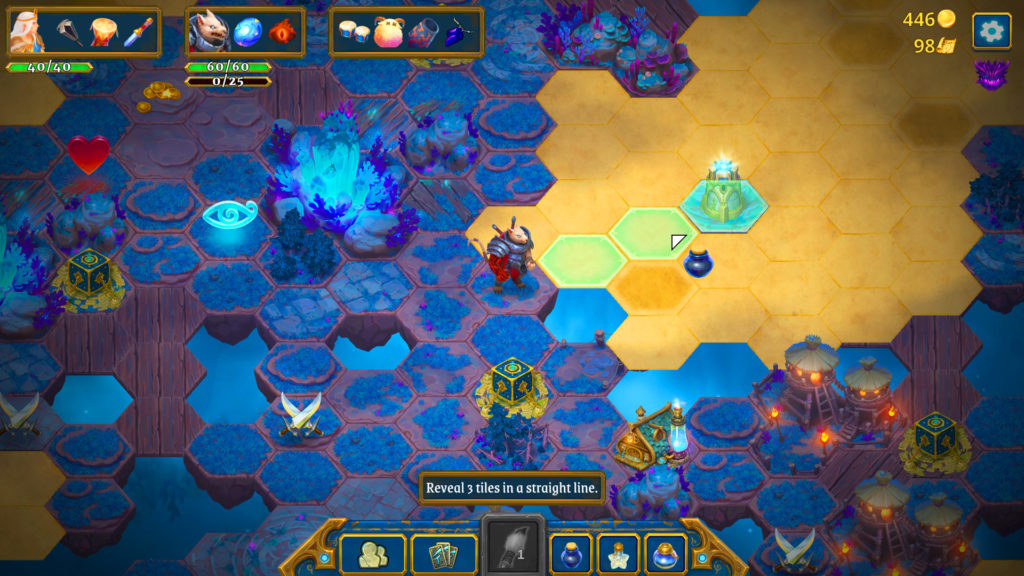 The map is hexagonal and grid-based. At the beginning of each run it’s featureless save for the odd tantalising icon begging to be reached. You will begin with a certain measure of ink, which allows you to fillin the blank spaces. Once painted, you can walk on them to reach points of interest. From power-ups and treasure to enemy encounters and fonts to replenish your health, there’s always something to work towards.

Maps have bosses, too, which you may often be forced to tackle early if you run out of ink to explore with. As you progress you’ll gather experience and items that will stay with you even if you fail, allowing you to grow and improve. So many roguelites fail to adequately reward the player. Roguebook does enough to keep you feeling positive even in the face of defeat.

It helps that it’s lovely to look at. Not a million miles from Faeria in aesthetics, the world is gorgeous. As you spend ink, the map squares burst into live. Plants and crystal formations pop up, while twinkling light effects spark and flash. Enemy designs are fun if not entirely original, but the beauty of the world makes up for it. If the story did more to grab your attention and pull you in, the atmosphere wouldn’t feel quite so wasted. 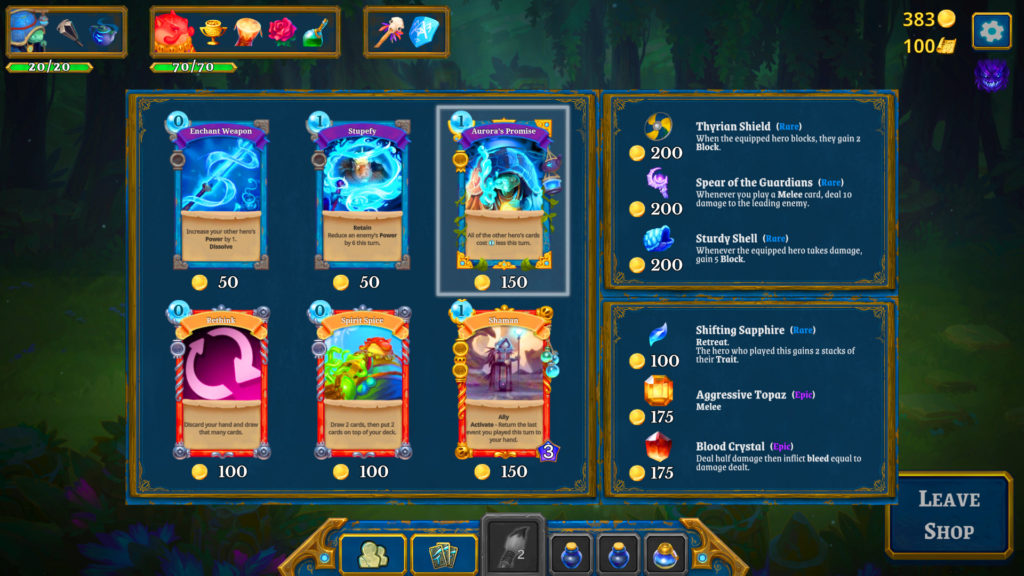 Sadly, though, roguelites aren’t often known for their storytelling. While Roguebook’s plot is okay, it’s also fairly run-of-the-mill. Still, the important thing here is the gameplay, and in this area it does excel. There aren’t many deckbuilders that offer crafting and card augmentation, but Roguebook has an entire system for it. Gems you craft from materials you scavenge and buy can be socketed into cards. These modifiers add a wide array of different buffs and abilities. They range from simple boosts to your ink rewards to augmenting your defence or attack. It’s a solid system that adds depth where you wouldn’t expect it.

On the whole, Roguebook is an interesting deckbuilder that does a lot of things well. It doesn’t do a great deal that feels new and exciting, but there are flashes of brilliance here and there. Abrakam know their audience and their trade, and it shows in the quality on offer in Roguebook.

On the whole, Roguebook is an interesting deckbuilder that does a lot of things well. It doesn’t do a great deal that feels new and exciting, but there are flashes of brilliance here and there.

New gameplay video released for TT Isle of Man: Ride on the Edge 3