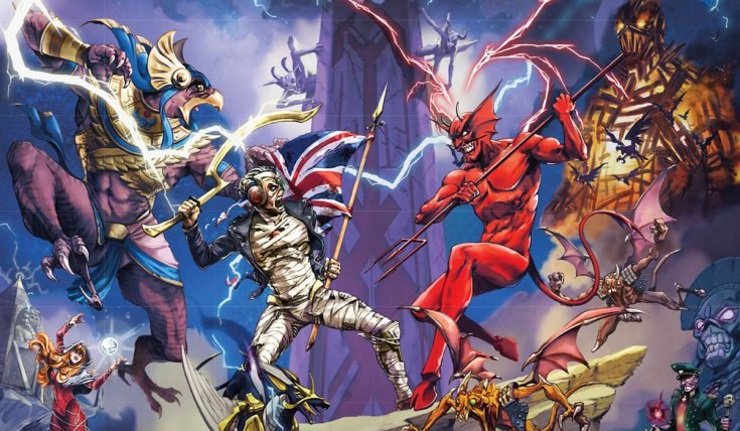 You may have heard in the news recently that a certain heavy metal band are releasing an RPG game – one that will be free-to-play and exclusive to mobile. If you haven’t heard, the band in question are Iron Maiden and yes, you did read that right. Legacy of the Beast, which sounds like a compilation of Ron Jeremy videos, is being made by Roadhouse Interactive, with Eddie, the bands long standing mascot, as the protagonist. It’ll feature unheard live recordings, characters from the band’s art and albums, and a soundtrack comprising – you guessed it – of Maiden hits. In light of this news, which I happen to be pretty excited about, I got to thinking: what other music stars histories, songs or albums would make for interesting games? Well, based on existing games, I’ve thought of a few concepts, as well as a few titles.

NOTE: some names have been changed to protect the £2.50 I have in the bank account.

Tales from the Beatles Still set in the episodic, non-combat Borderlands world of Tales, the premises is as follows: The Beatles are the greatest band in all of Pandora, with Psycho’s, Vault Hunters, and Claptraps all joining together to sing “Yellow Submarine” whenever the band are in town. After a gig, John mysteriously disappears, leading you, playing alternatively as Paul, Ringo, and George, on a quest across the planet in a bid to find your missing band member, so you can carry on being the biggest rock-stars in all of the land.

After a treacherous trek, you finally find John in a underground lair, where he informs you that he has been taken captive by the evil temptress, Floko Rono. When Floko appears, however, with a pot of tea and a cigarette on a silver platter for John, you suspect something isn’t right. This is when John breaks down, tells you actually that he’s ran away to be with her and was too scared to tell you. In the final showdown, you have the choice: tell him it’s okay and that he doesn’t have to go with you, which sees you all dance off in separate directions, while “Imagine” plays over the credits, or you can confront him and demand he carries on with the band. Not the best option, the latter ones unlocks the more sadistic ending, in which Floko gets very angry, kills you all with a machine gun, before burning all the Beatles albums she can find. There’s no credit music with this ending, just gob-smacked silence as you realise you’ve just killed The Beatles. You monster. The year is 2021, just one year after Tanye Nest has won the presidential vote. Just like in the original State of Decay, the aim will be to survive, but not from zombies. Instead, the main objective of this game will be to survive the third-world conditions that you’re now living in, thanks to Tanye and his lover, Jim, taking all the country’s money and using it to buy diamond statues of themselves, which are placed on every corner of every street.

You will also have to survive the brutal policing of the Teezy law enforcement, who are now the only police force in the land. If you can survive 365 days of this hell, which will be counted in real time (when you stop playing your character will go to sleep in a safe area and the game will have moved on eight hours when you come back to it), you’ll complete the game and unlock the happy ending. On the 365th day, news will break out all over the TV that Tayne was actually a gay fish in a robot’s body all along, and so he is stripped of his presidency and let free into the ocean. A new president is issued in, promising the demolition of the statues and order to brought back to the country. As for Jim, he goes back to making reality TV programmes, and questionable internet videos. You play as Blars Blulrich, a cursed drummer who has been sent on a quest to Lordran to destroy the evil file-sharing service, Kapster, from ruining the music industry. Traversing through a land of undead creatures, you must stop any file-sharing you see from happening, which is done by enemies in full view of your character, via tablets and laptops they carry around with them. Protecting these file-sharers are the rest of the worlds creatures, who are all either employed or owned by Kapster. Killing any enemy in the world, like Dark Souls, will give you souls, which you can use to upgrade your weapons: your trusty drumsticks.

The aim is to stop every transfer in the land you see from happening, with boss battles, dragons, and bonfires still being present in this adaptation. As for the ending, this will take place in the Kiln of the First Flame, where you will face your greatest enemy yet and the founder of Kapster: Lord Flanning. Once Flanning is defeated, you are greeted with an even greater beast: Evil Blulrich. It is here that you realise that you have been the real enemy all along, and that in order to save the music industry, you must defeat the evil, cynical monster in front of you, thereby killing the cursed part of your soul and freeing the undead enemies, as well as yourself, from the dreary kingdom of Lordran.

Gene Simulator: You play Goat Simulator, exactly how it is, but as a fully Kiss-ed up Gene Simmons rather than a goat.

Adam-Ants vs. Zombies: It’s pretty self explanatory, the goals are the same, but you play as different variations of Adam Ant rather than plants.

Need For Weed: You play as Snoop Dogg cruising around trying to find the best marijuana in the US, gaining points for getting to meetings on time and for not getting caught be the cops.