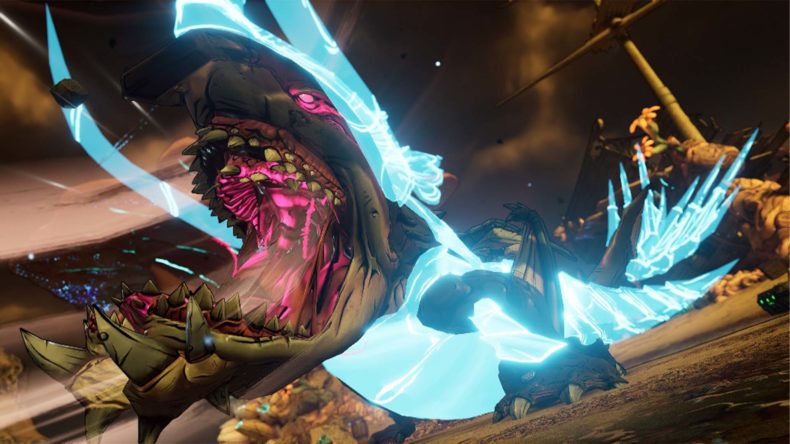 2K Games and Gearbox have announced that the first Tiny Tina’s Wonderlands DLC is coming this Thursday (April 21), and is called “Coiled Captors”. It’s even part of the season pass if you purchased the Chaotic Great Edition.

Coiled Captors begins in Dreamveil Overlook, where the enigmatic fortune teller Vesper awaits. Eons ago, the Coiled naga got the biggest catch of all: an old god. They trapped the being within the sharp-toothed, leathery-skinned body of a mighty seawarg, caging it deep within an icy mountain. Only you have the power to free him from his fleshy prison—but doing so means wading through wintery wastelands, arid ruins, and flooding caverns full of enemies.

Here’s the official word on what’s coming with the first piece of DLC:

New boss “Chums” the Old God, with four powerful forms that unlock over time. Vesper’s tales are designed to be replayed so you can test your mettle against this rising difficulty;

New loot to collect, including weapons, gear, and cosmetic items. Each time you vanquish the boss’ increasingly fearsome forms, you’ll earn Lost Souls that let you spin Vesper’s Wheel of Fate. Spins of this creepy contraption can reward you with Legendary weapons, gear, and other items;

New Chaos Chamber content. Completing Coiled Captors will also add its respective levels and boss to the pool of possibilities in the Chaos Chamber, the endlessly replayable endgame of Tiny Tina’s Wonderlands. This will expand the myriad of combinations for your randomized dungeon, making each run that much more unpredictable.

The season pass will include four content drops, all of which will include bosses and new settings, as well as (eventually) a seventh class.

Tiny Tina’s Wonderlands is out now for PC, PS4, PS5, Xbox One, and Xbox Series S|X. Don’t forget to grab the SHiFT codes for free loot!