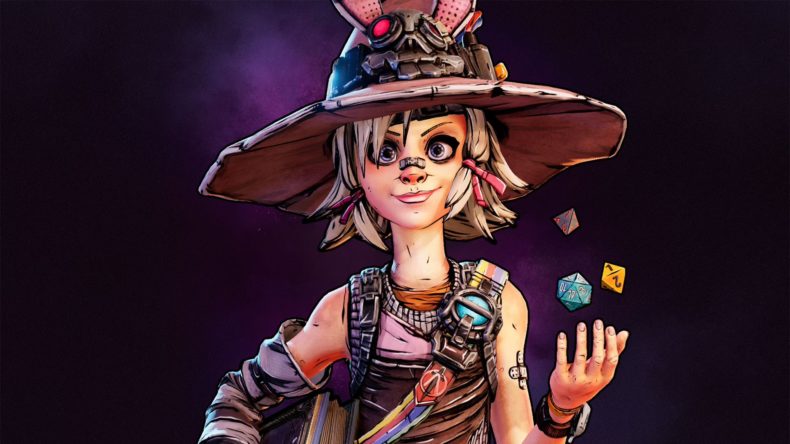 Anyone who played Tiny Tina’s Assault on Dragon’s Keep will be familiar with the tone Gearbox are aiming for with Tiny Tina’s Wonderlands. Before it was re-branded as a “Wonderlands One-shot Adventure”, Dragon’s Keep was a piece of DLC for Borderlands 2. While not all post-release content for the franchise has been stellar, Dragon’s Keep truly was. It swapped the dusty desert landscapes of Pandora for a world of fantasy and magic, as players indulged in Tiny Tina’s tabletop RPG, Bunkers and Badasses.

In Wonderlands, the titular Tiny Tina (the world’s most dangerous teenage girl) is stranded on a distant world with two bounty hunters, Valentine (played by Brooklyn 99’s Andy Samberg) and Frette – as well as your nameless character. Their ship has crashed, and to while away the time awaiting rescue, Tina has busted out the B&B board and invited you all to play. 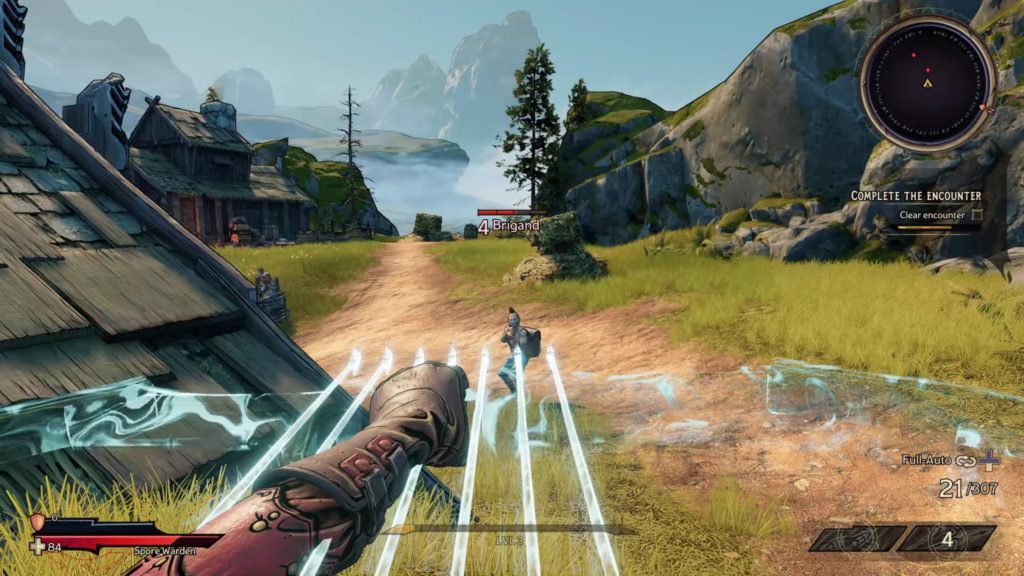 As a “noob”, your character makes a great sounding board for the rules and exposition of the story. Taking the role of Dungeon Master, Tina excels in pulling weird and wonderful scenarios out of thin air and injecting them into play. These might follow standard fantasy templates, or might well be result of her dropping a snack onto the board that forms a new barrier for the hero.

While the formula features all the quintessential Borderlands mechanics, the setting is completely different. This is a fantasy landscape as envisioned by a murderous adolescent girl with as much interest in explosive executions as unicorns and princesses. In the game within the game, an evil entity known as the Dragon Lord has returned from exile to reek havoc on the land. He opposes the rule of Queen Butt Stallion, the crystal unicorn that has featured in one incarnation or another since Borderlands 2.

Your job, alone or with others, is to travel the land, helping NPCs with sidequests while hoovering up vast quantities of loot. The critical path will eventually lead you to a confrontation with the Dragon Lord – but there’s a long way to go to get there. It begins with a character creator that’s more in-depth than we’re used to seeing in a Borderlands game. Here you can adjust hair, eyes, facial features and base armour colours before choosing a class from the half a dozen on offer. 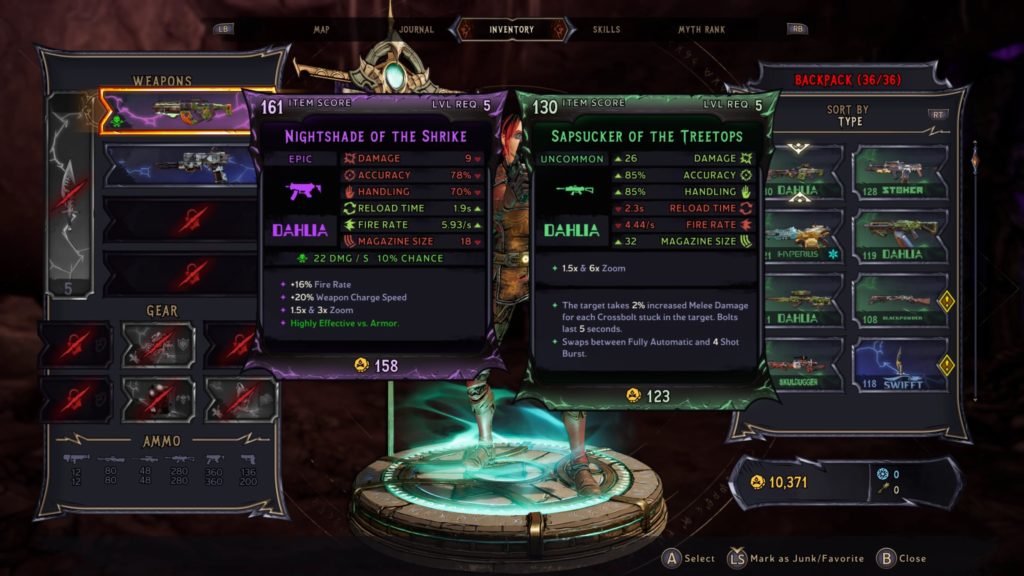 In typical franchise style, Wonderlands eschews simple classes like fighter, mage, thief. Instead, you have classes like the Clawbringer, a powerful melee fighter that can summon a pet wyvern. Or maybe the Graveborn, a Warlock-like spellcaster. The Stabbomancer is a stealth-based class, while the Spore Warden uses poison and a mushroom-like companion to deal damage over time. While you initially pick just one class, you will eventually be given the option to select another, allowing you access to more skills and abilities as well as the combat and attribute upgrades that come with it.

Tiny Tina’s Wonderlands is split into two distinct game types. There’s the standard Borderlands FPS (admittedly with some noteworthy changes), and a sprawling Overworld map with random encounters, hidden treasure and dozens of points of interest.

It becomes something akin to Pathfinder, as you control a big-headed version of your player character around the “board”. There are shrines and campsites, mines and castles, even some hub towns and cities. The world of Wonderlands is massive, littered with large, complex, self-contained locations that resemble more traditional Borderlands FPS maps. You’ll tangle with goblins, dragons, ogres, trolls, bandits, zombies, and “skellymans”, among other beasties. 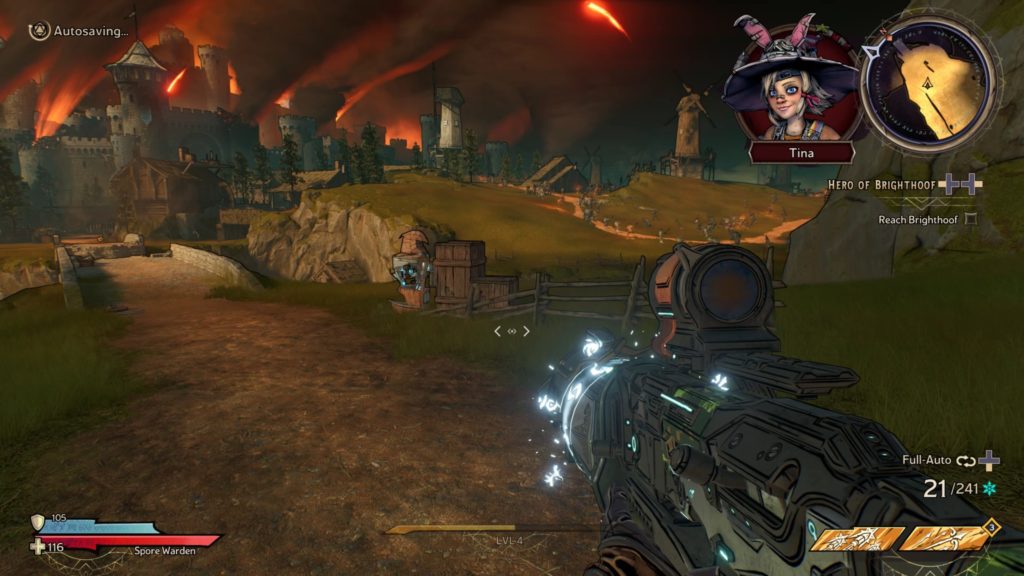 Loot falls thick and fast, showering you with guns and crossbows, swords, axes, daggers, and hammers. Shields are now called Wards, and you’ll find armour, rings and amulets to compliment your build. Perhaps the biggest change is that standard grenades are replaced by devastating spells. You can conjure fireballs, or eruptions of energy from the ground. You can channel deadly poison, freeze enemies, or summon dive-bombing wyverns.

All loot, particularly the weaponry, is heavily randomised. Spells and guns have specific classes (the weapon manufacturers return, along with some new ones), which give you a rough indication of their behaviour in the field. Machine-guns, handguns, snipers and shotguns make a return, allowing you to mix and match your gear to your heart’s content. It’s especially useful in the “Chaos Chamber” endgame, which I won’t talk too much about other than to say it’s all about the dungeon crawling and the looting.

Although Borderlands’ brand of comedy has seen diminishing results for a while, Tiny Tina’s Wonderlands ejects some fresh humour into the narrative. Valentine and Frette have some enjoyable banter that manages to remain amusing throughout, while Ashly Birch’s Tina is her usual live-wire self. If, like me, you get a kick out of hearing her ramble on about nothing in particular, you’ll be right at home here. The Dragon Lord reminds me most of Handsome Jack, chiming in with a bored yet mildly psychotic tone to belittle and cajole you. 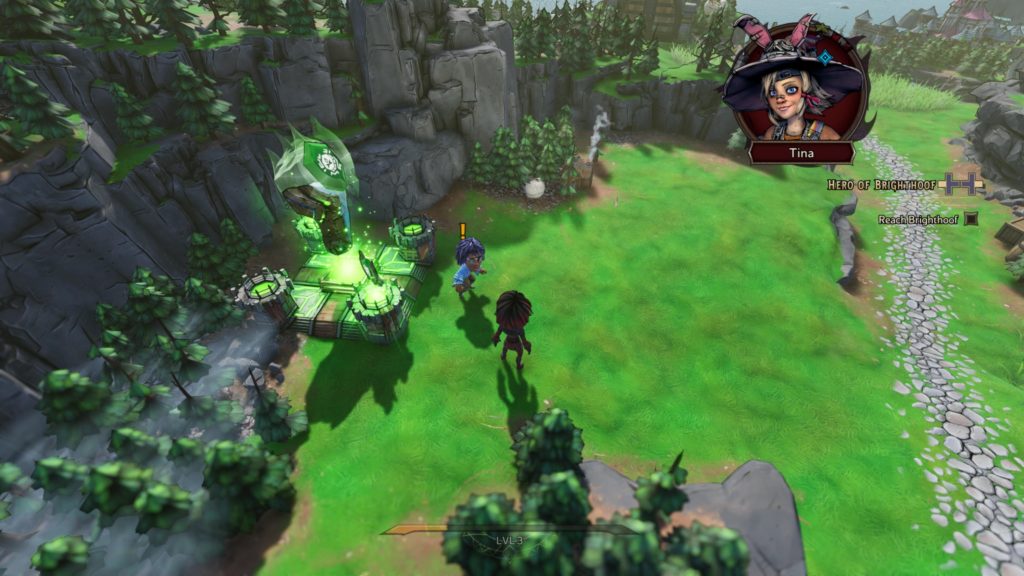 Now and then it all goes incredibly meta, too, with the Dragon Lord seeming to control events in the game without Tina’s say-so. Of course, Tina – like most Borderlands characters – tends to dangle her legs on the wrong side of the sanity fence. Old characters like Torgue feature sparsely in the story, alongside new allies like the gender-fluid Paladin Mike. As the story takes an occasional dark turn, we’re reminded that the Borderlands writers do have the chops to get serious, .

Shooting feels tighter than ever before, with more precision and more options for causing destruction. Yes, the formula is largely unchanged, but the variety of new enemies, spells, abilities and locales makes for shoot-outs and encounters that feel fresh and dynamic. The class diversity helps greatly, allowing you to build in interesting ways within a malleable framework.

Any complaints are kind of par for the course. I’m not excusing certain annoyances like sudden tanky enemies, glitches, or the fact that some of it is over-written to the point of irritation. But these things are as much as a part of the Borderlands formula as the 87-bazillion guns. Your mileage with certain things may well vary. Wonderlands is not particularly janky, but there are bugs here and there. I played a review build, which means glitches I saw may be patched out come launch. As a result, it’s hard to comment on them in detail when they could be fixed on release. Regarding the writing: I’m a fan of the humour, so more tolerable than some of you will be.

Wonderlands looks great in places, and the shooting, looting and levelling is just as enjoyable and impactful as it ever was. As you adventure through ancient forts, forbidding forests and, occasionally, beautiful sun-drenched fields, the narrative continues to surprise in ways only Borderlands can. A prime example is when you need a boat to cross the sea and Torgue comes up with a pretty unique solution to the problem. I won’t spoil it, but it made me laugh out loud.

Tiny Tina’s Wonderlands is more than just Borderlands with a new skin. The addition of proper melee weapons, spells, unique classes and the Overworld map are enough to set it apart from the rest of the franchise. The change of setting, new customisation options (including skins, colours, features and materials), and challenging bosses make exploration feel rewarding.

Alone or in a group, Wonderlands is an irreverent slice of frantic fun. It’s wonderfully mayhemic, brimming with cathartic gameplay, fountains of loot and colourful things to smash, blast and explode. Does it do anything revolutionary? Well, that’s a matter of opinion. But it certainly brings enough changes to the established formula to make it an absolute must-have for fans of the franchise as a whole.

Can be glitchy
Some of the characters are irritating

Tiny Tina’s Wonderlands may not win over many new fans, but it refreshes the existing formula and re-injects it with humour and heart.