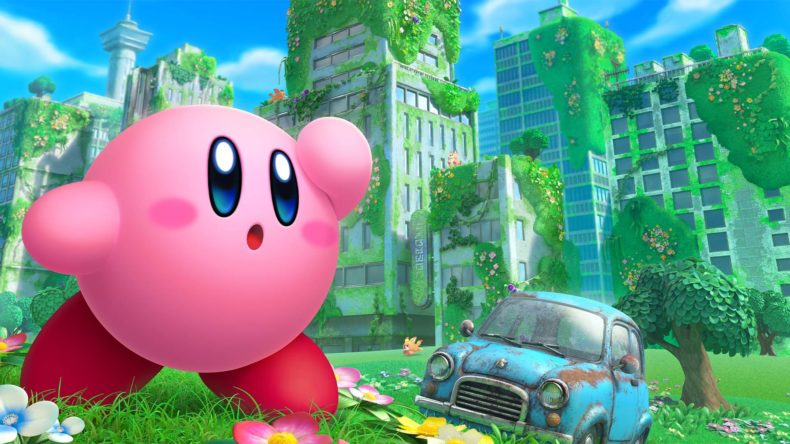 Kirby and the Forgotten Land feels like the game the entire world needs right now. Full of colour and adventure, it asks you to explore every nook and cranny and lose yourself in a vibrant world that will make you smile and, dare I say it, chuckle at the absurdity of some of the things you’re experiencing. Frankly, if it didn’t ever so slightly run out of ideas towards the end, I’d be lauding it as one of the best the genre has to offer, but then, regardless of that, I had a wonderful time every second I played as the titular pink sucker.

There are two ideas behind Kirby and the Forgotten Land that are new to the series. First up, yes, it’s a 3D adventure. Full camera control is missing, but it never actually feels like an omission. The levels are intricately designed and full of secrets that, if you had camera control, it might make some of the more hidden paths and objects a little too easy to find. 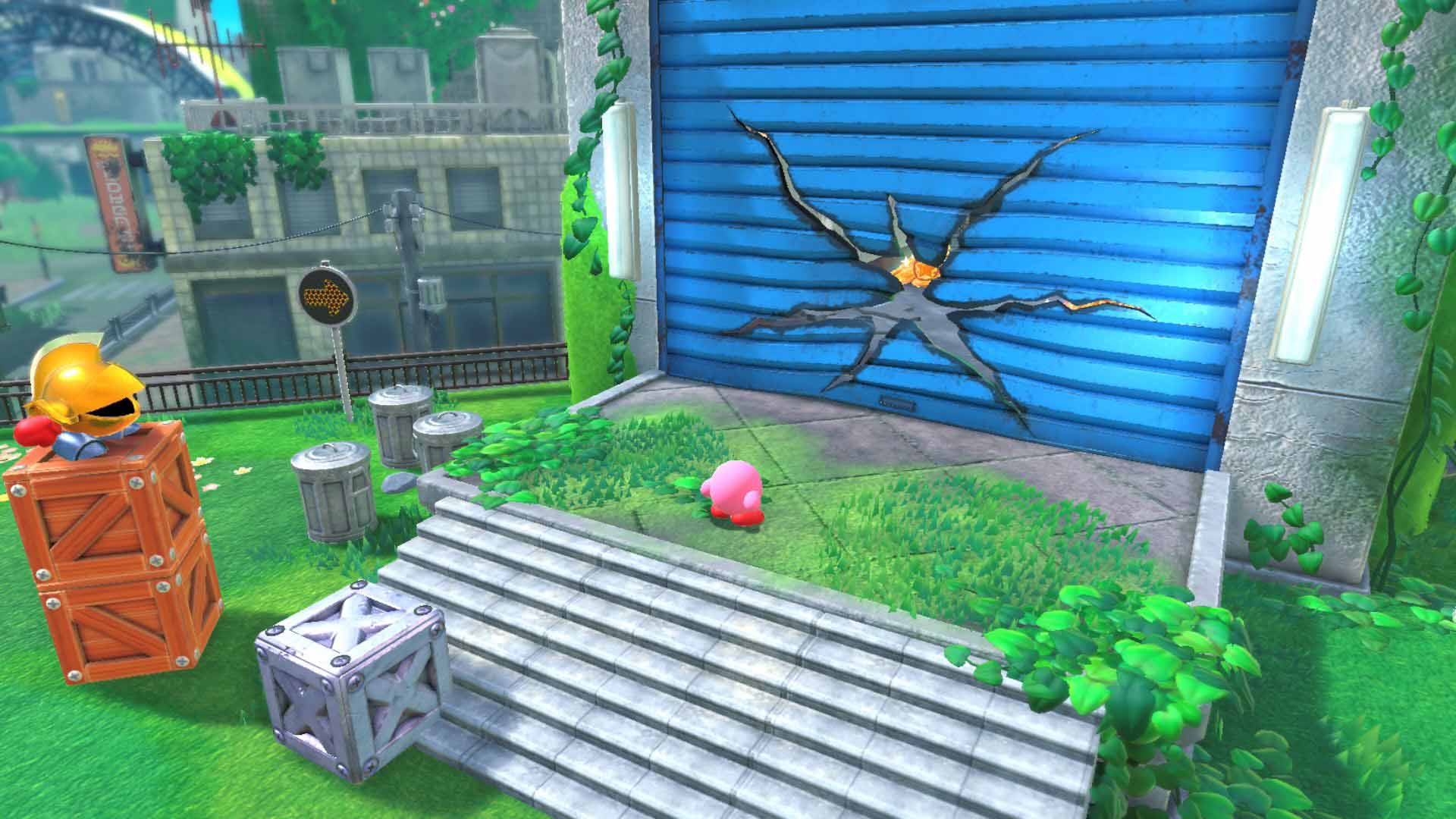 The second new idea is the “Mouthful Mode”. This allows Kirby to suck up things far too big for his mouth, and is the source of many of the mirthful moments. I wouldn’t call mouthful mode “sparingly” used, as such, but it’s also not overdone. Rather than entire levels revolving around this new mechanic, it’s more a case of them being used in sections of larger levels, or as ways to find yet more hidden items.

Kirby can suck up a full car and it becomes a mini-racing game: there are even some moments with a timer and scoreboard to test your skills, and yes, there are shortcuts as well. Kirby can suck up a cone, or a vending machine, and these all have unique mechanics. One of my favourite ideas is how Kirby sucks up a circle that lets him blow wind at enemies or fans, and he can even jump into a boat, becoming the “sail” and, again, find more collectibles. 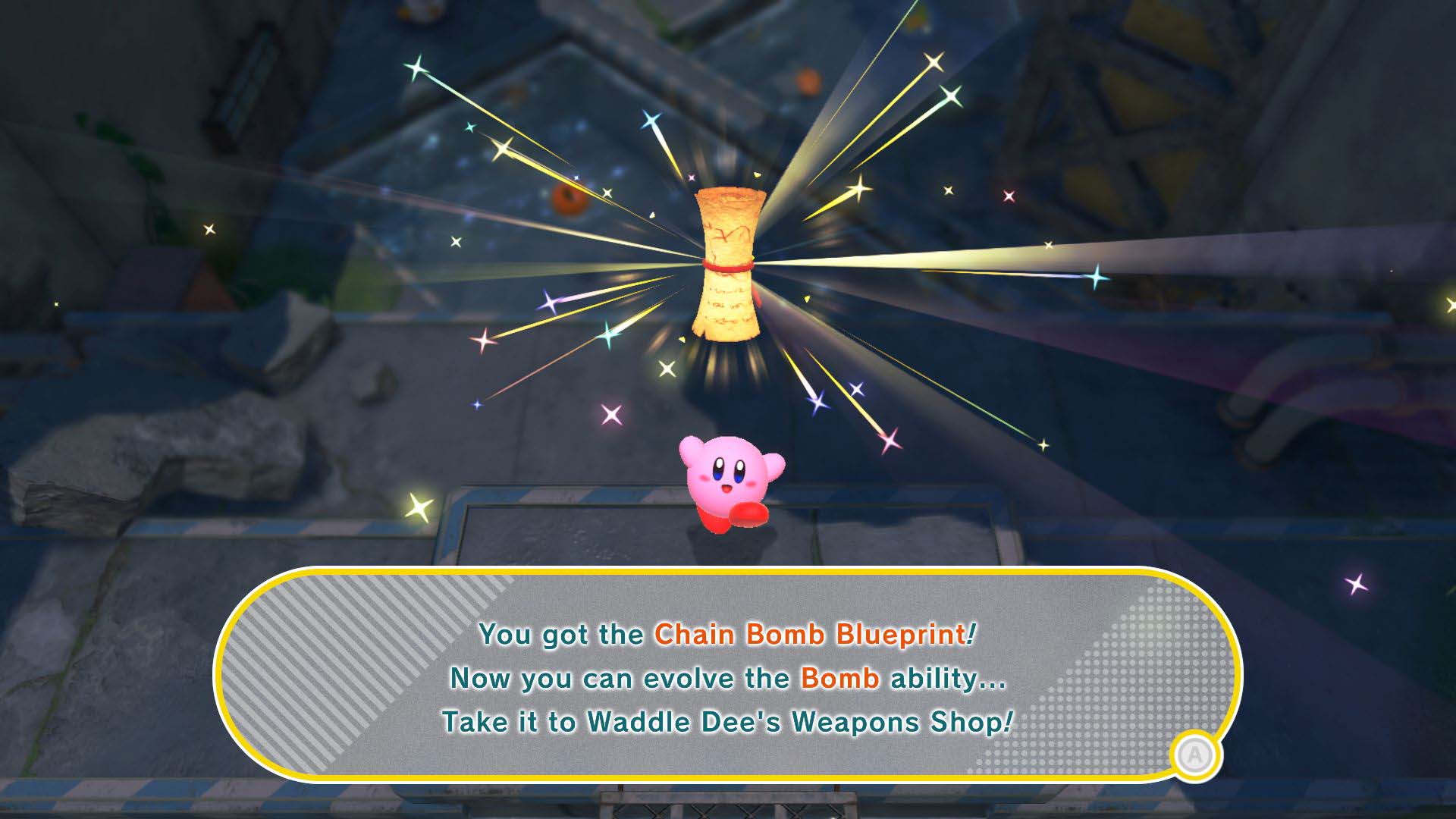 You may have noticed that I’ve mentioned secrets, hidden items, and collectibles, and that’s because it’s a massive part of what makes Kirby and the Forgotten Land so moreish. Each stage is fit to burst with these trinkets. You’ll gather currency to spend on health items, combat buffs, and the like, but you’ll also collect hidden macha-style items to add to your collection, and scrolls that can upgrade Kirby’s combat forms.

The forms, or copy abilities are similar to much of what has come before, really. You can wield a sword, shoot guns as a ranger, absorb a hot head fire enemy to wield fire, and so on. Each of these abilities can be upgraded by finding the scroll, and they become more powerful each time. You can still roll-back and select which version you want to equip when you suck up an enemy, and it’s worth noting the game is pretty good about heavy handedly hinting when you should switch out, often tying secrets to a certain form requirement. 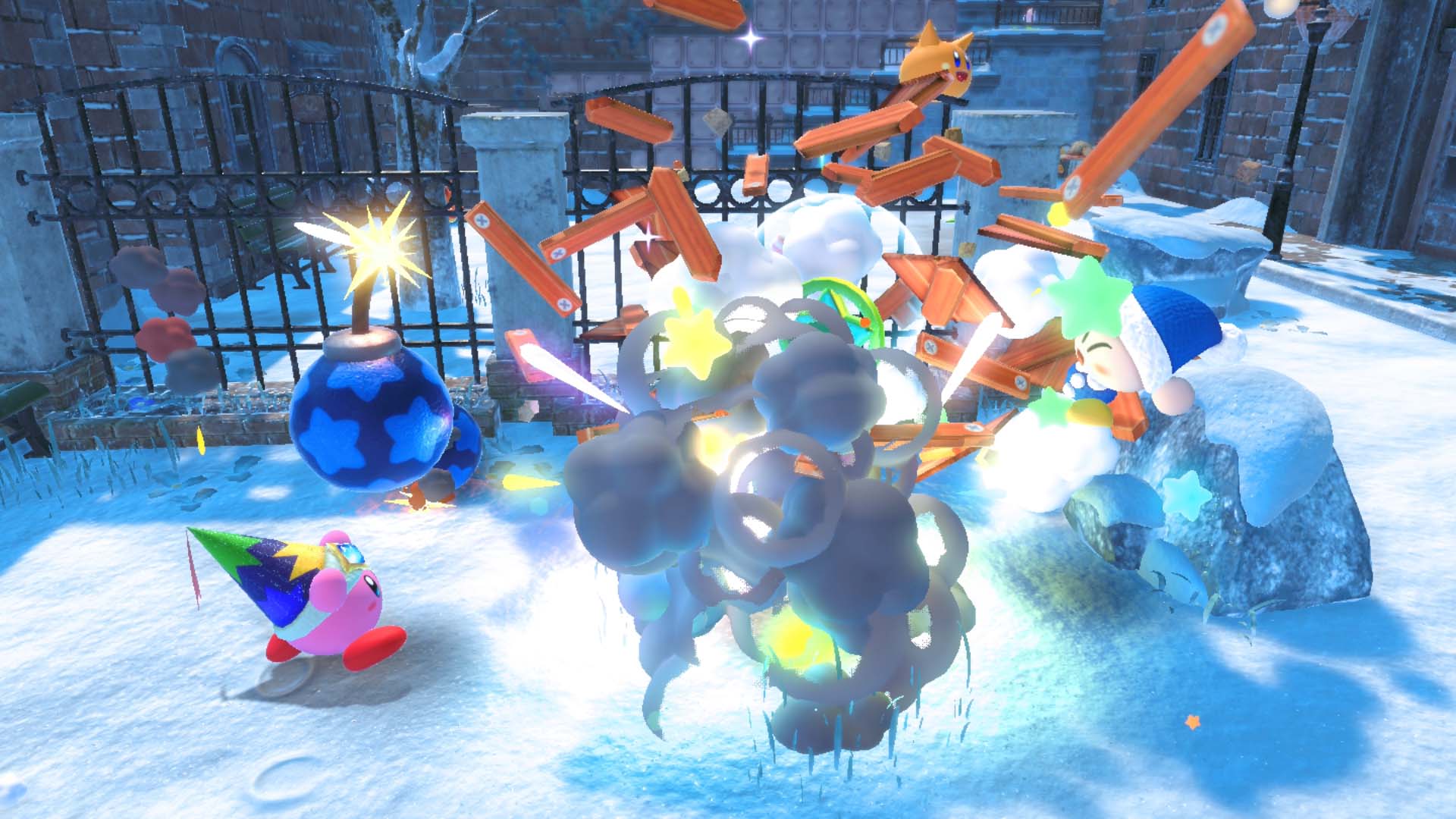 Outside of the main stages there are bonus levels which award a currency you need to spend in conjunction with the scrolls in order to upgrade. These are where some of the most fiendishly difficult levels sit, too. They’re shorter, time-attack missions, but some of the par-times will make you want to pull your hair out. Thankfully you only have to complete them to get what you need, but it’s nice to have the option to return and better your time.

Difficulty has been one of the problems I’ve had with Kirby games in the past, but it feels far more balanced in Forgotten Land. I played on “Wild Mode” which is for older players, but there’s no punishment for dropping it to the easier mode, aside from a small bonus you get for completing levels in wild mode. Bosses will be easier to beat, and you’ll take less damage on easy, and the addition of co-op as an option means you can get a friend to help if you’re still struggling. In truth, it’ll be a fairly easy game bar a few boss fights, and I do think the challenge lies in mastering those optional time trials. 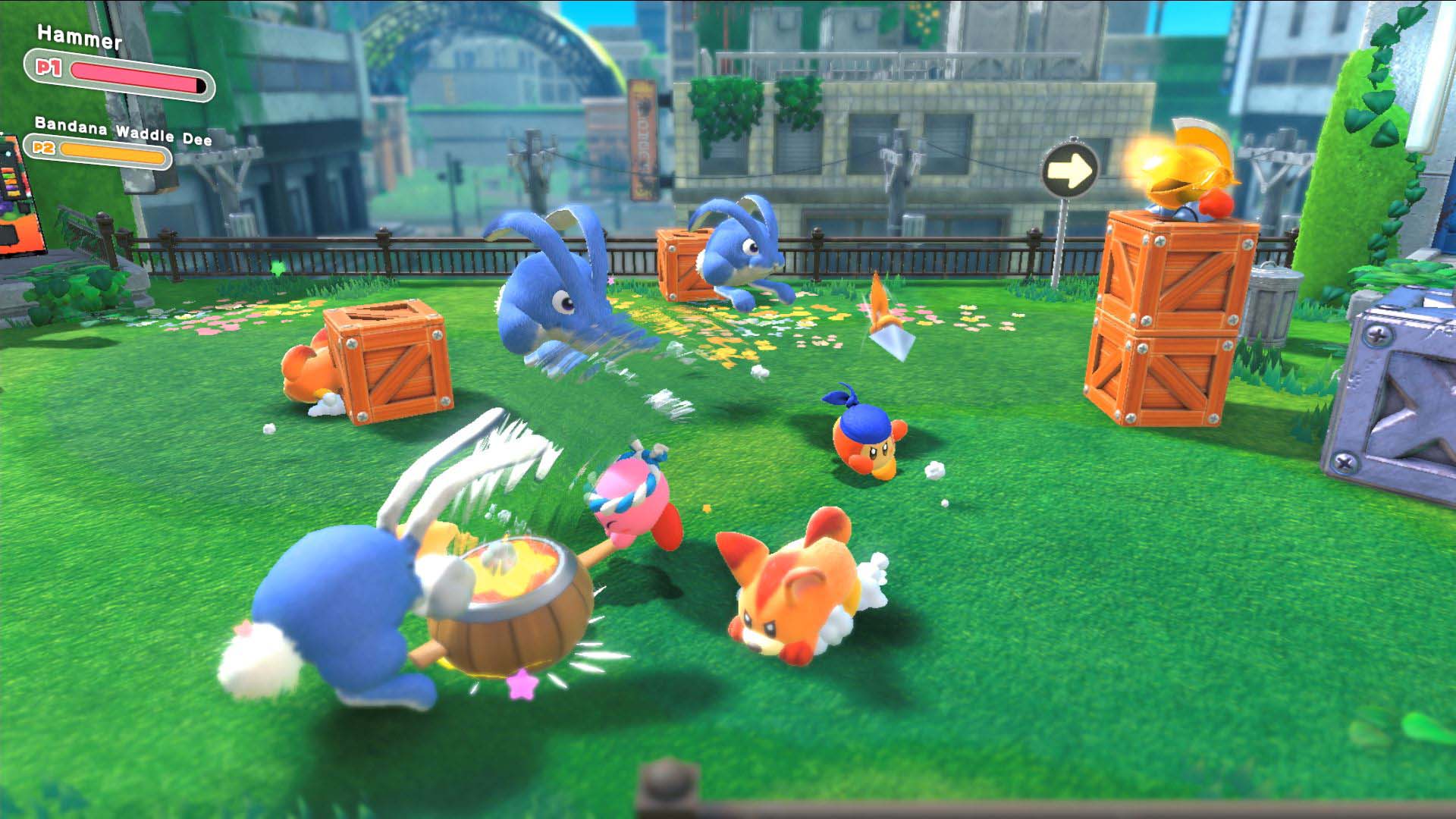 It’s difficult not to crack a smile as you’re jumping and floating around, sucking up enemies and indulging in the (surprisingly) deep combat some of the forms offer up. There’s plenty of nods to long-time fans, and every level follows the Super Mario 64 blueprint that means you can finish a stage by getting to the end, but there’s optional objectives all the way through. From finding the bonus hidden Waddle-Dees, to ripping down “Wanted!” posters of Kirby, or leading ducks back to their mother, you could rush through the levels, but why would you want to?

There’s even a large hub world offering additional mini-games (some even use the Gyro controls on the Switch), online presents, a colosseum for boss rush fun,  a theatre to watch cinematics back, and there’s even a fishing game. It’s fit to burst with reasons to make you love it, and it’s entirely frictionless, offering the antithesis to so many games who are chasing that gameplay that wants to punish you by beating you into submission until you accept playing by its rules is the only way forward. 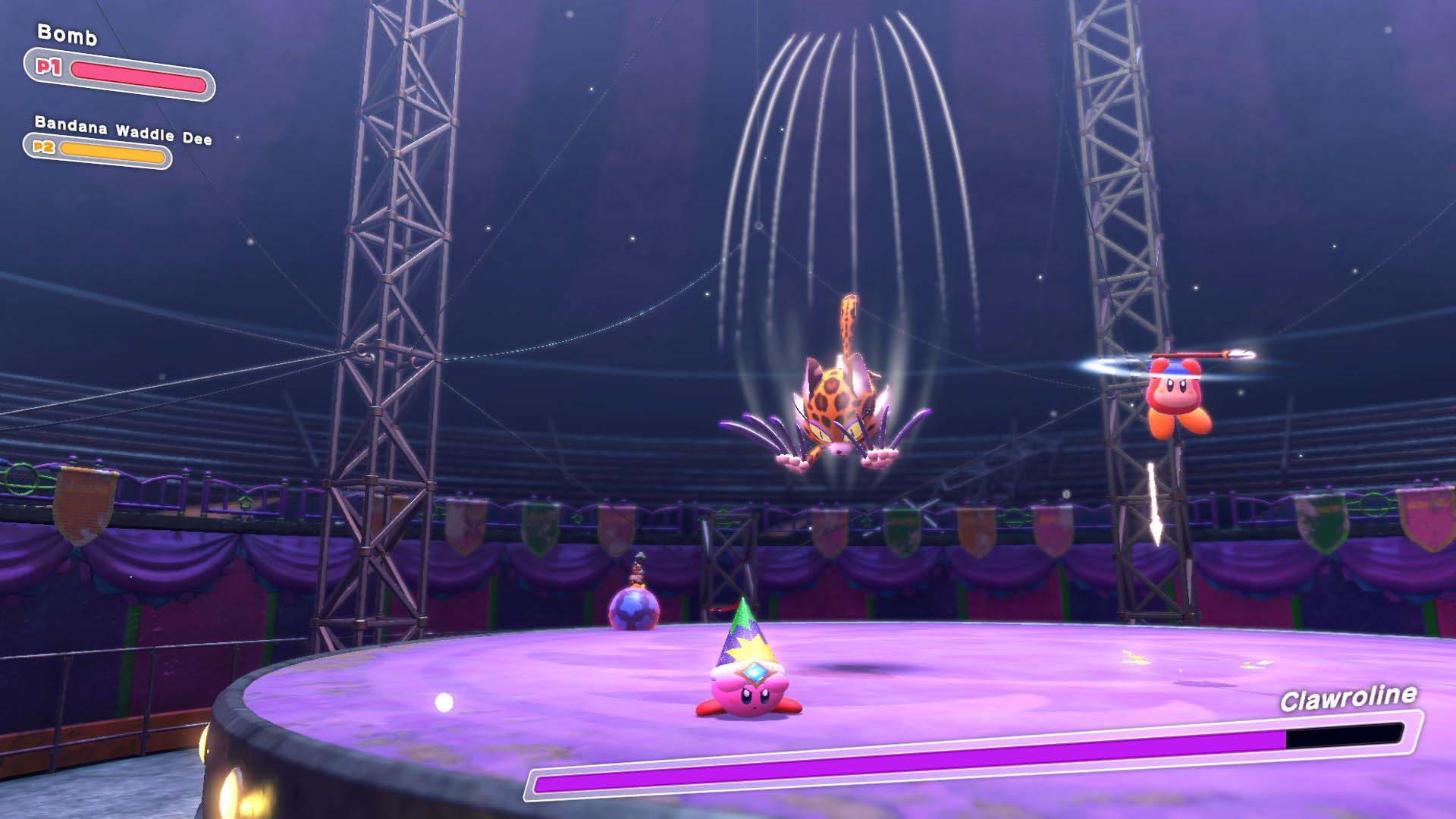 The only real negative is that it loses steam towards the end. While there’s some truly clever moments later on that mix up mouthful modes ideas in a clever way, there’s a few boss fights that are re-used, and arena fights which, after the second time, lose their lustre a little. That said, it doesn’t outstay its welcome, either, and feels just the right length. Rescuing Waddle Dees from hidden areas in meticulously designed levels reminds me of post-game hunting in Super Mario Odyssey, and frankly any game that even makes you think of that masterpiece is one worth considering, I’d say.

Kirby and the Forgotten Land is a lovely surprise. It’s an evolution for the Kirby franchise, and though it retains the fundamentals fans know and love, it adds challenge and adventure in a way that the series has never seen before. It borrows heavily from its mascot-friends from the Nintendo family, but also stands alone as an adventure every platform game fan should experience. I didn’t think it was possible, and I never thought I’d say this, but Kirby and the Forgotten Land is an essential purchase.

Gorgeous, vibrant world
A better challenge than most Kirby games
Full of reasons to keep playing

Some re-used ideas
Runs out of steam towards the end

Kirby and the Forgotten Land adds challenge and adventure in a way that the series has never seen before. An essential purchase and a lovely surprise.

You may also like
HAL LaboratoriesKirby and the Forgotten LandReviews