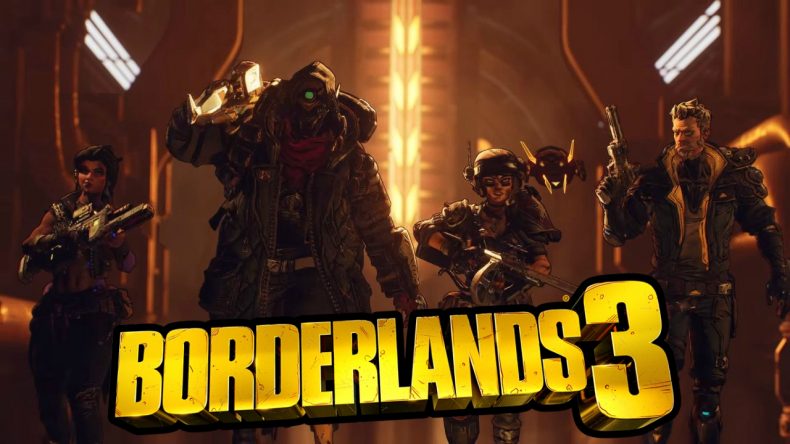 There are so many guns in Borderlands 3 that I am drowning in them. I have so much choice that a lot of my time is spent in menus mumbling to myself about various stats and bonuses. No two guns are the same, although across the various gun manufacturers they share similar characteristics and it’s these that I’m mulling over. I have a few favourites: Tediore tend to make guns that have a unique effect once the magazine is empty, a Hyperion weapon’s accuracy improves the longer you fire, and if you want elemental damage, Maliwan is your go-to.

At present I have an SMG which, upon a reload, I throw on the ground where it transforms into a mini turret. When an enemy is near, it sprouts legs and runs kamikaze-like into them, exploding and leaving a pool of radiation damage on the floor to damage any nearby enemies. I also have a pistol that I can switch between cryo and corrosive elemental damage and a shotgun that has two modes; a normal run-of-the-mill ballistic mode, or an alternate fire that will spaff a load of sticky grenades at my target. If I get a critical hit with my first shot, then when the the sticky grenades explode there will be a halo of “CRITICAL” markers around my unfortunate foe. It’s wonderful, and I cackle with glee every time it happens. It’s weird writing that shooting and blowing stuff up gives me joy, but there is something deeply cathartic in the combat in Borderlands 3. It’s the junk food of gaming, an endless loop of kill, loot, kill, loot, kill, loot, almost hypnotic and most certainly rhythmic. Some of my favourite shooters have absolutely nailed this dance of death and turned the act of shooting into a game of rhythm. 2016’s DOOM did it, asking you to constantly move and shoot and punch and then combined that with a soundtrack that perfectly complemented every action. Borderlands 3 doesn’t quite reach that level, but the sensation of being constantly on the move while mowing down your enemies is the same – shoot, reload, shoot, reload, punch, reload, shoot, loot – and it’s enormously addictive.

You play as one of the four Vault Hunters. There is the Siren Amara, Moze the Gunner, Fl4k the Beastmaster and Zane the Operative. In the past, each of the four classes had clear designations with the likes of Mordecai having skill trees focused on ranged weaponry, or Brick focusing on melee power with a huge health pool to compensate for him being constantly at the front of battle. With 3, however, a lot of that narrow grouping seems to have been relaxed. Skill trees across each class allow for a specialisation in whichever way you see fit.

In the previous games I chose Siren as my main class, building her as a sort of Vanguard with high shield capacity and quick recovery, a specialist in elemental damage and equipped with perks that constantly keep my shield and health up. With Amara I have experimented considerably more, creating a melee-focused character equipped with a power that slams her into the ground knocking enemies back and perks focussed on increasing accuracy and power the closer she is to her foe. Now I am running her more as a battlefield controller with a power that grasps enemies and holds them in mid-air, taking them out of the battle for the duration of the skill. I’ve focused on ways to reduce the cool-down of my skill, and picked perks that add increased elemental damage and an ability to ricochet damage to other enemies. No two builds feel the same, and the deep RPG systems at work across all four of the Vault Hunters encourage experimentation and repeat play. Combining your class skills, mods and perks with the additional benefits that different guns give you means you will be spending a lot of time in the menus. As for the guns, well, there are perhaps too many to choose from. Excess seems to be the buzz word for Borderlands, and the existence of “eleventy billion” guns does become overwhelming as you carefully consider the advantages of one over another. I have all but given up agonising over which weapons best suit my build though as every second comparing stats takes me away from the action. For all the headlines about the amount of guns there are in Borderlands, I think it is significant that there doesn’t appear to be a “must have” weapon that other looter-shooters tend to have. There is no Destiny Gjallarhorn, for example.

Excess is found elsewhere as well with the incessant dialogue, something that shouldn’t be surprising to long-term fans of the series, but somehow seems to have been ratcheted up even more. I have never much minded the sophomoric dialogue all that much, even finding Claptrap amusing at times, but here it becomes an endless drone and is little more than background noise to drown out the screams of your unfortunate foes. It is a shame because the cast of characters you meet is, in the main, colourful and interesting. Your main enemy is the Calypso twins, an obnoxious brother and sister combo parodying YouTuber culture and every moment they have on screen makes me want to smash their faces in. Job done I guess, I just wish they would shut up for once.

The core gameplay loop of Borderlands remains consistent right throughout the generous thirty something hours of play, and the enemies you face remain largely the same. The boss battles however do offer some variety. You will be despatching them in the same way you do every other enemy, that is chucking everything you have in your arsenal at them until they are dead, but it is saying something that each battle feels unique. Clever uses of environmental hazards as well as familiar boss battle tropes help make each one feel different. Similarly, the variety of environments keeps things interesting. The colourful, cell-shaded art style has never looked better, with gorgeous vistas and unique detailing on the endless chests you’ll find. As with previous games, you can play with up to three friends either in a co-operative mode where enemies scale more generously and loot is unique to each player, or in “coopetitive mode” where you all fight over the loot. Whichever mode you choose the co-op is smooth, with drop in and drop out play seamlessly integrated.

Borderlands 3 is very much more Borderlands. It doesn’t really offer anything new to justify its existence nearly ten years after the original was released, but what it does do, it does very well. Superb, never ending motion, explosions that pop off the screen and an arsenal of weaponry that is imaginative and fun to use make it a delight to play. Some will find the crass, moronic humour too much, but it feels that this has been designed to be mostly ignored. If you can tune that out you will find Borderlands 3 to be a surprisingly thoughtful RPG-based shooter with an endless supply of weaponry that makes you want to never take your finger off the trigger.

Borderlands 3 doesn't add much to previous iterations, but is a still a smart, almost rhythmic shooter with superb movement, deep RPG systems and more guns that you can shake a stick at. You might need to mute the dialogue though.