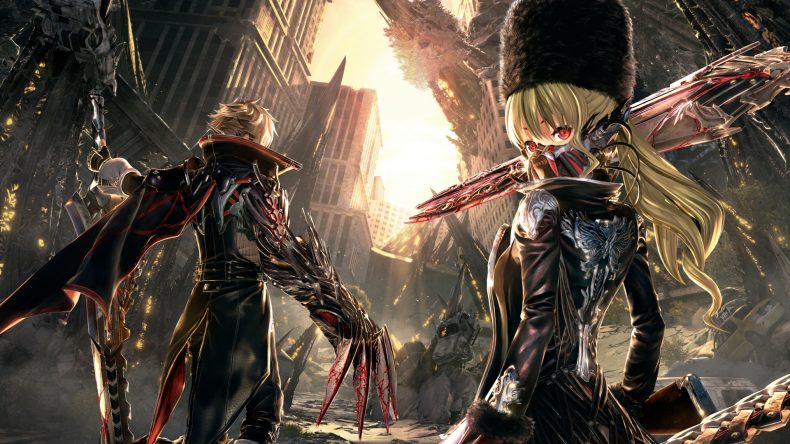 Vampires are cool. Whether you’re talking about Gary Oldman chewing the scenery as Dracula, Wesley Snipes educating fools about the futility of ice-skating uphill, or Brad Pitt growing long hair and going all emo on Christian Slater: vampires are one of those timeless villains that everyone has a bit of a soft spot for. The less said about Kate Beckinsale in that PVC catsuit the better, to be honest.

It’s not often you see vampires presented as the good guys though. And I don’t just mean the good guys because werewolves or other vampires are the bad guys. I mean good guys as in, the ones fighting to preserve humanity instead of just their own pseudo-race of undead bloodsuckers.

The vampires in Code Vein fall into the latter category, for the most part, as it takes place on a world that might be a futuristic Earth though no one ever really says it, where a deadly parasite laid waste to the population and transformed them into mindless blood-drinkers called The Lost. While experimenting on the parasite by attaching it to a young girl and basically poking it with different elements and chemicals, the scientists of this world created the Red Queen, an immensely powerful vampiric creature who destroyed or enslaved humanity. To combat her, the parasite was attached to the recently deceased and held in a kind of permanent stasis through the application of human blood, bringing them back to life as Revenants but preventing the parasite from taking over fully. The upshot of this is that any Revenant who goes too long without blood will Frenzy, losing their humanity and becoming a soulless Lost. The defeat of the Red Queen by an elite unit known as The Queenslayers resulted in an impenetrable dome called the Red Mist dropping over an area now known as Vein, which is flooded by a miasma that brings on the Frenzy. Think that’s a lot to take in? Try playing Code Vein and piecing it all together from massive cutscenes, playable memories, and flavour text. Suffice to say, you’re a Revenant who seems oddly immune to the miasma, and thus become the lynchpin of a splinter group of the military determined to bring balance and order to Vein by destroying the Red Mist and freeing both humans and Revanants from their thraldom.

And there are big swords in it. Great big swords and great big… other things. You’ll see.

Essentially, Code Vein is a Soulslike. Developed and published by Bandai Namco who published FromSoftware’s seminal Demons Souls and the Dark Souls Trilogy (and who are handling the upcoming Elden Ring as well), it sticks fairly close to the formula devised by From in terms of minute to minute gameplay, but changes up an awful lot of the periphery.

You’ll navigate the world from Mistle to Mistle, the word “Mistle” here representing the bonfires or lanterns you’re by now used to. Each area is a maze-like hub of shortcuts and secrets, usually with a boss either at the far end or the centre, the destruction of which will yield powerful gear or upgrades and push you on through the story. And there is a story here, a mostly coherent plot line threaded through the world and characters that relies on cutscenes and dialogue instead of forcing you to read the description on everything you find or check a wiki to answer your every burning question. Combat follows the Souls template pretty faithfully, giving you a light and heavy attack (though on the face buttons, not the triggers), a dodge, backstab and parry and allowing you to switch between two equipped weapons with a single button press. They are archetypal weapons of death too, nothing overly fancy: one-handed or two-handed swords, axes, hammers, halberds and bayonets (which are actually long muskets affixed with giant blades for a mix of ranged and melee damage). Special skills or spells are granted via Blood Codes, which are genetic markers you can find in the world or copy from your AI companions that allow you to learn and utilise Gifts.

It’s this system that stands Code Vein apart from a lot of its contemporaries, as many Gifts overlap between Blood Codes, allowing for some great build diversity. For example, the Fighter, Berserker and Hermes Codes deal primarily with melee combat and many of their Gifts are interchangeable, but you might also learn and unlock a few Gifts from Caster (such as an Ice Spike) or Astrea (which contains buffs and resistances). Some skills and gear are completely locked off by your choice of equipped Blood Code, which also determines your overall Health and Stamina.

It sounds complex, and it does feel a little convoluted until you start to understand it. But because you can assign skills to a specific Code (8 active skills such as attack moves and buffs and 4 passive skills such as increased health), switching between them as the situation calls for it soon becomes handy. Certain weapons and armour (called Veils because why not?), can’t be used with specific Codes, either, so you’ll need to switch between gear at times too. There’s more I could go into at length here, like finding Vestiges to unlock latent Gifts inside certain Codes, or the Exchange system that allows you to give your NPC companions presents in return for rare crafting and upgrade materials, or even unique weapons. There are systems on systems in Code Vein, and it can feel overwhelming at times. This is offset by the actual combat, which is fast-paced and hugely satisfying. You’ll be dodging, rolling, positioning for backstabs, and even the heavier weapons feel fairly swift. The parry and backstab, though, can be a bitch to time right. The window for each is incredibly tight, and I found the hit box for the backstab to be a little inconsistent. Sometimes I’d try over and over again to land one and fail, and other times I’d roll through an enemy while spamming attack and execute the move without knowing I’d done it.

A big departure from most Soulslikes is the Partner system, whereby you can select one of the NPC characters to accompany you on your travels. They’ll fight with you, heal you when you go down, and each has a special combo Gift you can activate that feels like a callback to God Eater. In fact a lot of Code Vein feels like a callback to God Eater, from the character art to the world design, which isn’t necessarily a bad thing, but does mean Namco’s Soulslike struggles to maintain its own visual identity. A lot of it may play like something fresh and new, but it doesn’t always look it.

The multiplayer element riffs off Dark Souls or Bloodborne as you fire off an SOS to request help from other players. Thanks to the incredibly dense character creator no two players are likely to look the same, and thanks to the sheer number of Codes and Gifts, very few will play the same either. Well until someone theory-crafts a meta and every suddenly starts using the same builds. The difficulty does feel slightly skewed towards multiplayer too, given that enemies often come at you in great numbers. A large portion of tha game will be spent fighting beside sheer drops, though, meaning that whether playing alongside another player or AI, you’ll need to watch your footing. In terms of bosses, Code Vein doesn’t always get the mix right. The majority are melee-based and have a habit of heavily signposting their attacks, and quite often the rewards for taking them down don’t really feel worth it. I’ve used the same zweihander now heavily upgraded and transformed, since the first hour or so and no boss drop has been better. Visually some of them are quite striking and imaginative, but a few of them suffer from some intense frame rate issues on PS4, even on a Pro, that saw me die more often due to janky performance than my own lack of prowess. Also, goddamn the boss camera in this game. When you’re target locked the camera spasms all over the map, and when you’re not you’ll lose track of most bosses and be hit from behind over and over.

Code Vein is a unique take on the formula that attempts to do a lot of new things within the established framework and mostly succeeds. Some of the cutscenes go on for way too long, and there are moments where you can watch the memories of other characters via static, disconnected dream sequences that you can only walk slowly through which are horribly disruptive and, frankly, dull, but I give Bandai Namco props for daring to bring a fully realised plot to this genre. The writing is even pretty decent throughout – a handful of JRPG character tropes notwithstanding.

Despite a number of performance issues and combat that can feel just a little too loose and mashy compared to its genre-mates, Code Vein presents a unique and, dare-I-say, slightly more casual alternative to titles like Bloodborne and Dark Souls. It’s no revolution, but, perhaps ironically, Code Vein is an enjoyable, compelling Soulslike with a great deal of heart.

Despite a number of performance issues and combat that feels just a little too loose and mashy compared to its genre-mates, Code Vein presents a unique take on the Soulslike formula