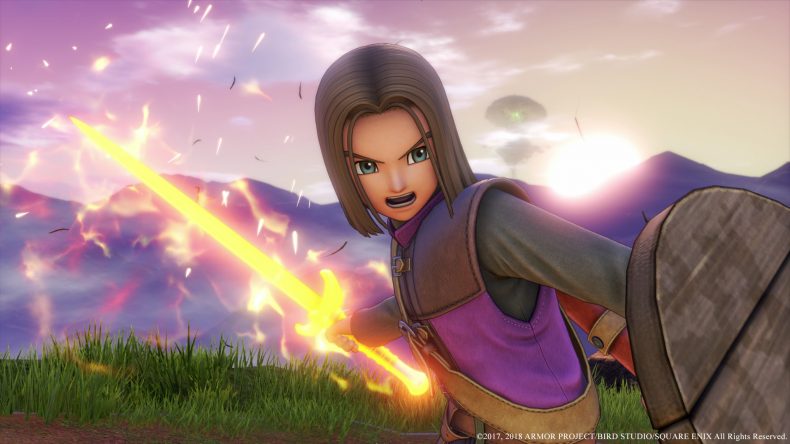 Good things come in small packages. Small towns and cities bustling with life punctuate the world of Dragon Quest XI S, a grand game shrunk down to a neat little Switch package; a cute 14GB compared to the PS4s 30GB and yet it doesn’t feel like a port. Square Enix themselves have referred to this as a remaster and while there’s an obvious visual trade off for the smaller size and under-powered hardware this is the same game and more. In effect this is a remaster of the 3DS version of the game, something us westerners have yet to see, and my word do I love it.

Upon starting up the adventure of the Luminary you’ll be taken aback by just how good Dragon Quest XI S looks. The Switch hardware does a pretty impressive job of putting out a visual experience to compare with the PS4 version. Cut-scenes in particular are very close to the original release, while world traversal and battles look lovely with the personality-laden monster models, at least in docked mode that is. In handheld mode there is a further loss in visual fidelity with blurrier textures, and character faces suffering the most in actual gameplay, but cut-scenes still hold plenty of detail. The only other real problem is the frame rate drops in the larger towns and cities, but considering this doesn’t affect reaction times for anything important it’s perfectly fine. You can only put this witchcraft down to the flexibility of the Unreal Engine, something that has seen games like Rocket League ported to the darling little machine; the scalability allows the game to shine despite the fact the hardware can’t compare to the bigger home consoles. Moving through the overworld areas sees unobtrusive scenic elements and NPCs pop-in but well within distance to be able to react. Monsters, though, are visible from great distances, giving you more than enough time to either avoid or steel yourself for a fight.

They’ve added a load of stuff to this version too, chief among them being the use of the fun-sized Forge (an easy bake oven for warrior accessories), which can now be used anywhere you want with the bonus being that you can also purchase the required items to forge equipment no matter where you are. Then there’s the ability to call a horse wherever you are, fantastic if you want to quickly explore an area, but it does make the stationary horse bells redundant. Finally, they’ve also added the option to skip cinematics, even if it’s the first time you’ve seen them. Skipping cinematics is going to be a godsend for anyone looking to play the game through again, and it even works in the game’s new 2D mode. The Dragon Quest games are always delightfully old school. I remember the original launch for XI being met with a lot of positivity but also a lot of criticism for what are considered archaic mechanics. Thing is, I like things like this. It’s refreshing to go back and play something like Dragon Quest XI when you’ve seen how much the Final Fantasy series has changed recently. What Square Enix have done here though is doubled down on the traditional stuff and given you the option to play the whole game as if it was a top down 16-bit JRPG.

The 2D mode is a bit disappointing, though. All the marketing leading made it seem that switching between them could be done on the fly, allowing you to change how you play, but this is not the case. When you get to a church you can ask the saintly caregiver to change your perspective of the world, at which point you’re prompted to save your game and create a new 2D save. It’s important to remember this distinction as you can only play what you’ve already taken part in after the changeover. I only found this out after I had played through the opening Tor section for the second time and wanted to switch back… three times I went through that damn Tor bit.

Let’s be real here though: having the option to play through the game in 2D is a nice feature. All the story beats are the same; dialogue is carried over, but the whole game has been remade for a 2D template – the locations reworked and the sound effects and music “demade” to bring it more into line with the aesthetic. Remember when I said they’ve doubled down on the traditional stuff? Here you’ll also find that the battles are random rather than roaming in the world and the battles are back to a view of the enemies and that’s that. No viewable party or other bells and whistles. If anything this is a little too far back, but I’m sure there are many who will enjoy playing through the game like this. I just wish the switching process was smoother, but considering that in terms of structure the whole game changes you can understand why that’s not possible. Even if you don’t play through it like this, a feature that’s come from the 3DS version is a visit to a place called Tockington, where you meet the Tockles, those little ghibli-esque ghost things you see loitering about on your journey. A trip to Tockington puts you in the 2D realm anyway for trips to Dragon Quest worlds of old to put right some misdeeds a mysterious vandal is performing with the past. It’s a neat little diversion and much more palatable than playing the whole game in 2D.

I’ve always liked how these games are much more light-hearted than the Final Fantasy games and they put through so much personality into the music, the character models and the dialogue. As with past games towns have their own accents to go along with their differing architectural choices. The people of Gondolia have Italian accents, Cobblestonians are cockneys, and there are others I don’t really want to spoil for you. A lot of effort has obviously gone into the localisation work as, even if a character isn’t voiced, the text is written to convey any accent effectively. Even the rhyming couplets of the mermaids are present in true Dragon Quest fashion.

I guess one way I wish this series wasn’t so stuck in the past is with its protagonist. Eleven Dragon Quest games now and still the voiceless, personality-less protagonist for you to imprint yourself onto is a male. Dragon Quest Builders 2 and even Dragon Quest Heroes (for all of its issues) allow you to at least select a gender. It’s a shame the flagship of the name can’t bring itself to change just this one simple thing, and although it’s not something that’s going to affect your enjoyment of the game, we’re talking 33 years and eleven mainline games, now. You can keep the old school gameplay, just the choice would be very welcome. It’s been a year since the original release of Dragon Quest XI and it’s good to see that the long wait for the Switch version has been worth it. It’s not only a faithful port, but one that’s been improved in all manner of ways, ensuring that while it’s not quite the remaster Square Enix would claim, it’s at least the definitive version of an already great game. Word of warning though: although this is practically perfect for Switch, it’s a bit of a battery hog. Sessions of around an hour eat up about 61% of your battery, although this seems to vary as some days I’d see a loss of 54%. Your mileage may vary, but generally you’ll be losing 1% of battery every minute.

Dragon Quest XI S: Echoes of an Elusive Age is a triumph, a showcase that maybe it is possible to port everything to Switch (provided adequate concessions are made), the aesthetic probably goes some way to allowing this and we’ll probably get a better idea of how well the Switch can handle things when The Witcher 3 gets released. What we have here though is a huge game, with a wonderful story, sumptuous looks, and unparalleled depth, and you can play it practically anywhere! We often say a game is perfect for Switch, here I’d say the Switch is perfect for Dragon Quest XI S.

Brilliantly optimised for the Switch
Laden with extras
Sublime soundtrack

Dragon Quest XI S is as perfect a port as you could ask for, and makes you feel good about owning a Switch in the first place.