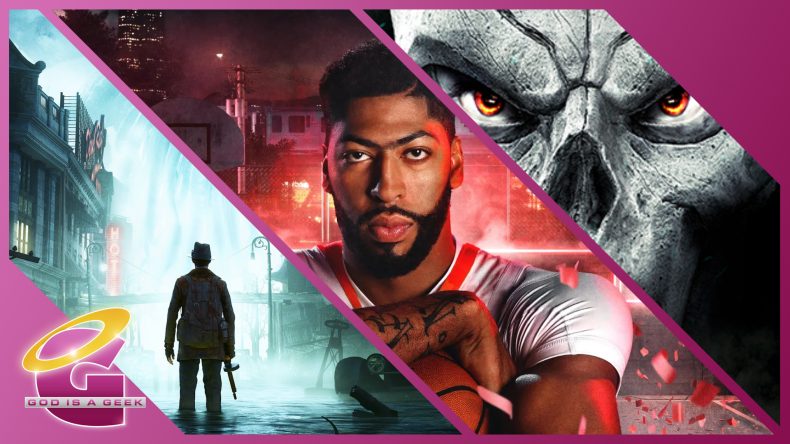 Today’s Switch Re:Port Review features three big third party games that arrived on Nintendo Switch. Chris looks at the newest NBA game with NBA 2K20 while Mick Fraser looks at The Sinking City and Darksiders 2 on Switch. If you missed the last Switch Re:Port Review, check it out here. If you’re new to the Switch Re:Port Reviews on the Geek, I (with the help of the fine folk here) look at the Switch ports of games that have been released on other platforms. These reviews aren’t just to talk about the game but to look at how the games run and play on the Switch and how they use the Switch features.

Mick Fraser
Originally released on PS4, Xbox One, and PC and scored 9/10 on Xbox One Despite having a title that sounds like you’re saying it wrong no matter how carefully you pronounce it, Darksiders 2: Deathinitive Edition is a decent enough port of a cracking game let down by some very iffy performance.

It tells the story of the Horseman Death (voiced by the inimitable Michael Wincott) who sets out to clear his brother’s name in a sequence of events that precedes and overlaps the timeline of the first Darksiders game. While the first game had elements of Zelda and Soul Reaver baked into its chewy, delicious crust, Darksiders 2 maintains the core tenets but adds in a bevy of RPG mechanics such as equippable loot and skill trees.

The story and writing are exceptional throughout, as is the voice acting although Mark Hamill’s Watcher from the first game will forever be missed. Transposed to the Switch, Darksiders 2 loses almost nothing visually and flows fast and, for the most part, smooth, but there is noticeable freezing at times when the frame rate literally slams to a halt for a second and you wonder if it’s crashed.

With the best will in the world, its difficult to ignore, as it takes you out of the action every single it happens. I wouldn’t go so far as to say that it ruins the experience, but it certainly mars it. In fact, the frame rate can be pretty inconsistent altogether. I’m all for making concessions for a port, but this is already a fairly old game and we’ve got ports of things like Diablo 3 and more recently The Sinking City with almost zero issues.

Luckily, the game is incredibly playable. Throwing Death around the environment is super satisfying, scaling walls and swinging across chasms. The Metroidvania-like structure works as well here as in the previous game, and backtracking never feels a chore because you’re always looting new weapons and armour, and the combat is so much fun.

Death’s primary weapons are the dual scythes, but you can equip axes, hammers, claws and blades to use as a secondary weapon, allowing for mixed combos and a variety of special attacks that make combat a cathartic thrill. Mix in Death’s handcannon, Redemption, and his steed Despair (who can be summoned much more often than War could summon Ruin), and Death has a killer arsenal of weapons and skills that feels hugely satisfying to build and utilise.

The Deathinitive Edition comes with all the DLC included, so in the latter half of the game you can spend time in the Crucible arena slaying demons, monsters and fallen angels for some cool, unique loot and a welcome challenge. Ultimately, this is a solid enough port that remains great fun to play, but I can’t turn a blind eye to the constant freezing and drops in frame rate. Recommended, but go in aware.

Chris White
Simultaneously released on PS4, Xbox One, Nintendo Switch, and PC and scored 8/10 on PS4 NBA 2K20 is a mode heavy basketball sim that caters to so many people. Whether you want to play through multiple seasons with your favourite team, or enjoy the spectacle and drama of the MyCareer mode, 2K Sports has managed to make yet another game that’s filled to the brim. I love NBA 2K20, and have sunk plenty of hours into it on the PS4, and whilst the Switch version is a respectable one, the pace of the sport is lost slightly due to the 30fps that’s boosted up to 60fps for the PS4, Xbox One, and PC.

It can be tricky keeping up with the opposition when they’re on a break, specifically because it requires holding in the ZL button to mark tightly. When dribbling and trying to break off from your marker, the frame rate – whilst solid – lacks the fluidity of the other consoles. Despite this, it still looks great on the Switch. Player likenesses are a little off with certain players, but the courts and arenas look amazing, and the lighting is a highlight.

All the modes including MyGM, MyLeague, and MyTeam are all present, with nothing obvious being omitted from this version. Loading times seem to be longer, but it’s a small price to pay to be able to take NBA 2K20 on the go. I had mild lagging in handheld, more so when games were starting up, and the same problems often popped up from time to time whilst docked.

Overall, NBA 2K20 runs well on the Switch, and if you’re not bothered by 30fps, you’ll find little wrong with 2K’s Switch port.

Mick Fraser
Originally released on PS4, Xbox One, and PC and scored 7/10 on PC If you’d asked me a few months ago to jot down a list of 2019 games I expected to get a Switch port, The Sinking City wouldn’t have been on it. Frogwares’ Lovecraftian mystery has a fairly slow pace, a consistently grim tone and the kind of busy, layered world I would have expected the Switch to struggle with.

Imagine my surprise, then, when I made the jump from the PS4 version to the Switch and found a smooth, competent port that even bothers to utilise some of the Switch’s features, when many ports simply ignore them.

In case you’re coming into The Sinking City fresh, it follows Charles Reed, a former sailor turned PI who has travelled to the town of Oakmont, Massachusetts to seek a cure to the nightmarish PTSD he endures, wherein he sees visions of a colossal, eldritch sea god. The Sinking City conservatively selects is elements from several Lovecraft stories, most prominently A Shadow Over Innsmouth, as the creepy town of Oakmont is home to not only humans but two other subspecies of homosapien – as well as its share of horrific, mutated creatures. All of which the townsfolk are completely acclimatised to.

As Reed, you’ll use your trusty camera, notebook and pistol to investigate strange goings-on in the town and come to terms with your own past and mysterious connection to a deity known as Kay who is worshipped by the townsfolk. It’s a bizarre, deeply twisted place, where decaying carcasses of sharks and octopuses lay rotting in the streets, and cultists walk among the crowds with buckets of body parts. Half of Oakmont is submerged ever since a cataclysmic event known as The Flood, and much of the open-world is connected by boat.

Most of your time will be spent investigating various crimes and mysteries around the town, taking photos and gathering evidence which you can piece together in Reed’s “Mind Palace”. Connect enough evidence and you’ll open up a solution to the problem, which often come with choices attached that can affect how the townsfolk and more prominent NPCs react to you. There’s a smattering of action thrown in as you deal with the aforementioned creatures, called Wylebeasts, but gunfight are secondary and ammo is scarce. Reed has an extrasensory perception you can toggle on or off, and he can even cross over into a secondary dimension from time to time to get a better handle on events. How and why is not explicitly stated or hinted at until later in the game.

The Switch version makes some heavy concessions in order to maintain a steady framerate, most notably in the removal of many textures and lighting effects in the world. The Sinking City is still a decent looking game, but the drop in textures and detail is noticeable, especially when Reed speaks to other characters and everyone is in close-up. That said, it’s not damaging, as the environments are still detailed enough to warrant poking around in.

It’s not the most thrilling game at times, and certainly suffers occasionally from over-ambition, most apparent in the open-world structure of Oakmont, a city that really doesn’t need to be all that open to fulfil its role in the story. The combat is also a little clunky and cumbersome, and most of the time you’d rather leave the gun behind and get stuck into the much more impressive and engaging investigative elements.

If you want a little extra immersion you can opt to play with motion controls for shooting and snapping, but I found them a bit of a hindrance. It’s nice to have the option and great to see a port that actually utilises some of the Switch’s unique features.

The Sinking City on Nintendo Switch is a surprisingly solid port of a game you probably didn’t expect to see on the Switch, and offers the kind of dark, contemplative mystery that Nintendo’s console was lacking.