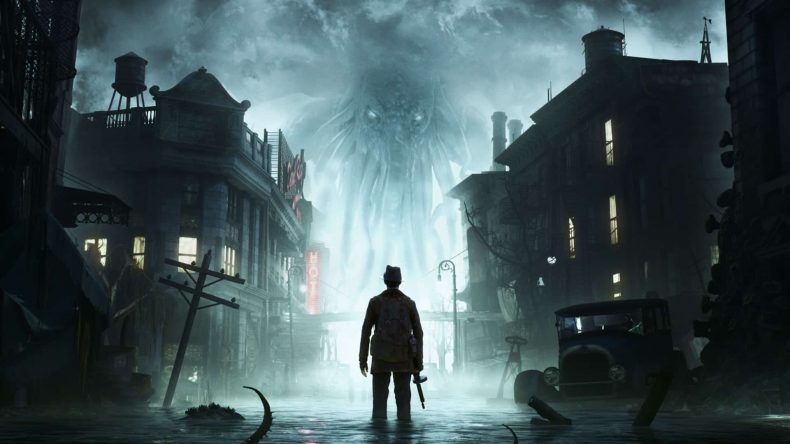 If you’ve ever read HP Lovecraft’s short story “A Shadow Over Innsmouth” you’ll almost instantly recognise the setting and situation into which you’re dropped in Frogware Games’ latest sleuth-em-up. Oakmont, Massachusetts is, in all but name, the very same city, a once-thriving industrial metropolis brought to its knees by some strange occurrence, its population ravaged by unspeakable evils lurking in the darkest depths of the waters that surround it, an unknowable, unfathomable evil awaits those who are willing to pull on the strings and unravel the mysteries of The Sinking City.

You play as Private Investigator Charles Reed, a man ravaged by visions and nightmares, summoned to Oakmont by his associate Johannes Van Der Berg in the hope that he can piece together the truth behind his own troubles and, in doing so, what lies at the heart of Oakmont’s ruin. Upon your arrival you’re instantly drawn into a missing persons case that quickly becomes a murder investigation that then proceeds to spiral out of all control in the most Lovecraftian ways possible. Without ruining too much of a story you should really go into unspoiled, Reed’s time in Oakmont will see him hounded through the decaying streets by monsters, embroiled in multiple disappearances and murders, investigating strange goings on deep underwater, entangled with secret cults and Aztec undead, the KKK, sea monsters and crazed sects… it’s a Lovecraft fan’s dream and one which, certainly in terms of the narrative, has been brought to life fantastically well by Frogware. Much of the gameplay here will be instantly familiar to anyone who’s played the developer’s Sherlock Holmes series, and of those The Devil’s Daughter is probably closest in tone to The Sinking City. Here we have a somewhat streamlined, certainly more user-friendly version of the investigative techniques employed in those games, with your character this time dropped into a full explorable open world city rather than the boxed-off instances in which you could wander as Sherlock.

Gone are Holmes’ confidence and swagger, his self-belief in his own talents and network of associates, so too the library and room full of disguises, all the comforts and reassurances of 221B Baker Street replaced here by Reed’s troubled soul and supernatural abilities. Here is a man struggling to understand the powers he possesses and how they lead him from one crime scene to the next, always on edge, alone, unkempt; he’s an outsider, a “newcomer” as he’s referred to by those he meets in Oakmont.

Investigations, although streamlined, share much in common with the Sherlock games. You’ll still arrive at locations and examine every inch of them for clues (the mechanics are still somewhat nit-picky in this regard), focusing in on items of interest using Reed’s Mind’s Eye mode, Holmes’ “Sherlock Talent” in all but name, which enables him to see visions of the past, reveal illusions or be led down invisible tracks by shadowy figures known as Omens. Once you’ve collected the requisite amount of evidence you’ll usually switch to Retrocognition mode in which you’ll watch shadowy replays of parts of whatever incident you’re currently investigating, then you’ll put them together in chronological order to gain a better understanding of what happened, perhaps netting yourself a name or part of an address, an occupation or details of a weapon used that you can then add to your case files and piece together in your “Mind Palace”. From here you return to the decaying streets, making use of the various dilapidated institutions Oakmont still has to offer; you’ll find yourself in the archives of the local library, police station, hospital and newspaper, piecing together information in order to locate suspects, learn more about a spate or murders or whatever it is you are currently working on. Archives allow you to choose three pieces of information from four different sections in order to retrieve what you’re looking for and, depending on which difficulty you’re playing on, this can be a satisfyingly tough task that really forces you to dig into the evidence you’ve uncovered.

There are three difficulty levels on offer in terms of the detective work here: Newcomer, Detective and Master Sleuth. Newcomer mode adds icons to pieces of evidence so that you know, for example, that they need to be researched in an archive or that a certain location should be visited in person for clues. Detective difficulty removes these icons and Master Sleuth takes away all help, leaving you with a massive challenge on your hands.

It’s admirable how Frogware almost completely does away with hand-holding, especially on the harder difficulties, and lets you work your way through the city mostly unaided. You’ll constantly have to consult your map and use the flexible icon system to mark out where items or places of interest are, sifting through your backlog of evidence and combing through your files to keep your momentum going. I found myself absolutely stumped on more than one occasion, frustration giving way to genuine pride in my sleuthing abilities when I finally found the missing piece I was looking for and, In this regard, it’s definitely worth knocking the difficulty up to Detective to get the most out of things. The detective work and story are where The Sinking City really shines. For my money the investigative aspects flow better than in the Sherlock Holmes games, pieces of the jigsaw fit together in a more satisfying manner and doing away with the minigames and controlling of secondary characters from those previous titles keeps things from getting bogged down. The story is, for the most part, always intriguing enough that you’ll want to solve your current investigation, and I was genuinely interested to find out what would happen right up until the absolutely bananas ending. Again, I won’t go into any detail in terms of the storyline, but it encompasses fifteen main missions which should take you around twenty hours to complete if you’re thorough. There are also several pivotal choices to be made throughout the campaign which affect the ending you’ll receive, as well as a good amount of fairly substantial side missions taking in everything from multi-part murder investigations to running errands for the strange locals.

However, unfortunately, things are not all rosy. This is absolutely not a AAA game and this is a fact most sorely felt in aspects of the open world. Graphically the game does a good job in creating the right atmosphere, Oakmont is an unsettling place to spend time, dark and corrupted, with a skyline and architecture that never makes sense, adding to the feeling you’ve slipped into some nonsensical fever dream, but it has multiple technical problems and in many ways feels truly last gen.

Many of the locations you visit reuse assets to a massive degree, so you’ll spend a lot of time investigating exactly the same building interiors with only different clues and a bit of furniture moved here and there to differentiate. Likewise, NPCs will become overly familiar because they share the same handful of character models. I met the same people many times over, try as they might to hide behind a variety of beards and hairstyles. Characters also often suffer from a lack of dialogue, running out of it very quickly and then repeating the same tedious line for the rest of the game. The level of detail in how NPCs behave and the general bustle of a city we’ve come to expect in open world games this generation certainly isn’t on display here. On one hand it almost accidentally serves to help in establishing Oakmont as a half-deserted, unfriendly, ghoulish place full of broken people but it’s hard to mask the fact that technically the game is simply lacking. Traversal of Oakmont can also be a pain until you’ve unlocked all the fast travel points, which I’d advise you do as a matter of urgency before settling into your investigations proper. You’re on foot for 90% of your travels which can become tiresome and is only broken up by a tedious, pointless system of boats that you can use to transport you down submerged streets, it adds to the atmosphere of a sinking city but in practice grows old quickly.

Another problem is the combat. Every location you visit forces you to confront various bland and badly-designed enemies. There are only a handful, around four or five in total, and they are all equally as annoying and totally unnecessary – the detective work and story alone would have been enough to contend with and it feels like the enemies are stuffed in for fear of what might happen if we didn’t have the safety net and comfort of combat. Frogware has even added in areas highlighted by a red icon that are filled with monsters to clear out and I can’t for the life of me imagine why anyone would ever want to go near them beyond accumulating pointless XP to unlock pointless upgrades to the skill tree that’s been stuffed in for the sake of having one. You can almost see how unimportant the combat is to the developer in how you receive new weapons: there’s nowhere to go to buy them, you’ll just randomly and nonsensically have them gifted to you by characters throughout the story. “Oh, thank you for helping me, here, take this battle rifle as a reward. Yes, I just had it in my pocket, it’s yours now.”

Overall then, on the one hand The Sinking City is a well-written, solidly acted and mostly compelling detective story with satisfying investigation mechanics set in a mad world that’s sure to please fans of Lovecraft and Frogware’s previous Sherlock efforts. On the other, it’s a somewhat janky, last-gen open world effort with pretty dire, totally unnecessary combat and tedious methods of traversal stuffed in. If you can ignore the technical failings, set the combat difficulty to easy so you breeze past the monsters and stick to getting embroiled in the story. There’s still plenty to like here if you’re in the mood for some private detective shenanigans set in a lovingly-crafted (my god – Ed) ode to Lovecraft.

If you can ignore The Sinking City's technical failings, set the combat difficulty to easy and stick to getting embroiled in the story