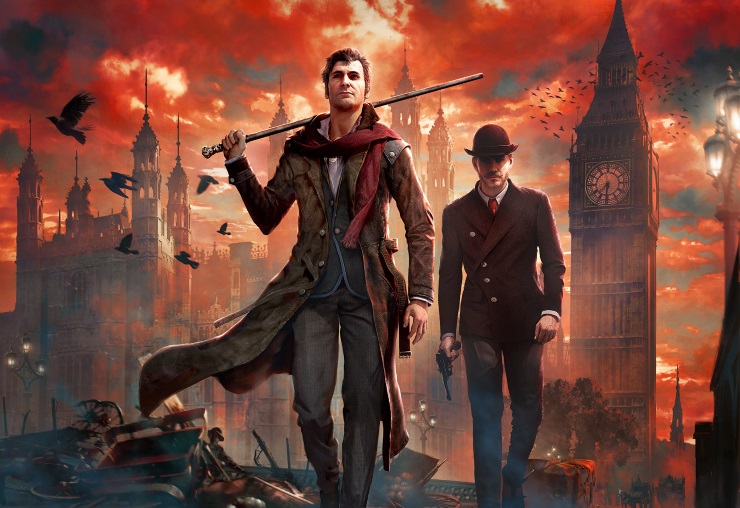 It must be nice to be always right. I personally am right around 43% of the time, which is hardly impressive, but then I’m not England’s Greatest Detective, so there’s usually not much riding on the drivel that pours out of my mouth. Sherlock Holmes, on the other hand, makes his living on the fates of others, so when he makes a decision he needs to be damn sure he’s right. Luckily, in Frogware’s latest Victorian crime adventure, he can’t actually get it wrong. Not ever. Not once.

There’s a curious system that drives Sherlock Holmes: The Devil’s Daughter. You’ll visit crime scenes as Holmes or his trusty partner/biographer Dr. John Watson and uncover clues found in the environment or gleaned from interrogating witnesses and suspects, and then you’ll enter Holmes’ brain directly, where you link together the evidence you’ve found based on your deductions to form a network of firing neurons that will eventually lead to the decision of who to finger for the said crime and whether to condemn or absolve that person. The odd thing, is that you can’t get it wrong. No matter how quick you solve the crime, who you implicate based on what evidence or what you recommend the law does with them afterwards, the story continues and smug old Holmes remains infallible.

This lack of a fail state is double edged. It makes you feel like the smartest person on the planet, yes, but it also removes any tension from the decision making. Everything becomes arbitrary. You can review how you did in any of the five main cases from the menu, which will indicate to some extent whether you were actually “right”, but it doesn’t matter. In the end, Holmes simply can’t mess up in any meaningful way, and so you can’t, either. Thankfully, The Devil’s Daughter isn’t merely a sequence of crime scenes and interviews. The developer is an old hat at this now, after 9 games in the series, and the confidence shows. It might not have a AAA budget, but it has a wealth of ideas sandwiched in between the general Sherlocking. Mini-games (and these are exactly that) abound, often showing up only once each. From fisticuffs in a backstreet pub to lock-picking, lawn bowling and safe-cracking, you’re always doing something different.

Holmes might be escaping a deranged hunter through a dark forest or defusing a bomb, maybe pottering around 221B Baker Street trying on costumes; you might not be Holmes at all at times, climbing into the shoes of Watson or street urchin Wiggins, or even taking control of their dog, Toby. You’ll be called upon to look up facts in Holmes’ library, analyse chemicals at his lab or perform autopsies at Scotland Yard, and scrutinising characters yields more dialogue options and clues. Again though, making the wrong deductions may result in an “incomplete character profile” but it matters not a jot in the scheme of things.

One criminally underused mechanic is Holmes’ ability to use his imagination to replay a sequence of events. Hitting L1 when prompted allows you to assemble a sequence from data you’ve gathered and then watch it play out. It’s very cool, but hardly used. Likewise, Holmes’ “Detective Vision” is really only useful when the game tells you to use it, so it’s rendered almost pointless. If Frogwares had given us all these skills and then dropped us in the deep end of a mystery with no hand-holding or sign posting, it would have all been much more compelling. The central story highlights the biggest changes to the formula. The Holmes here is less eccentric and more focused, attempting to build a relationship with his adopted daughter, Katelyn, while avoiding a potential relationship with his beautiful yet mysterious neighbour, Alice. Kate turns up now and then between your forays into London, and her visits all tie in quite nicely with the overall story told in the five cases, but the plot never really manages to gather pace. There’s a disjointedness to it all that’s hard to shake, which is partly to do with Sherlock himself, or at least this iteration of him. He spends so much of the game alone, or beside undercooked supporting characters, that his trademark off-the-wall personality never has a chance to shine, and the result is a quieter and, dare we say, duller incarnation. Aesthetically Holmes and Watson have something of Robert Downey Jr. and Jude Law about them, respectively, but they have little of the charm or charisma that should go with the look.

It’s not helped by the choppy visuals, either. The environments, whether in the murky swamps of Epping Forest or the grimy streets of London, are all somewhat drab and forgettable, while the character animation is unnatural and uncomfortable. Loose eyes and bad lip-syncing hold back the decent script, and the physics are non-existent, which makes the stealth and action sequences something of a chore.

If Sherlock Holmes: The Devil’s Daughter is guilty of anything, it’s of giving us too much and not enough at the same time. Frogwares proved with Crime and Punishment that they can forge engaging mysteries, but removing the fail state here threatens to dampen the tension beyond repair, and throwing so many mechanics at us reduces the impact and quality of each one, meaning that while The Devil’s Daughter does a lot of things adequately, it does absolutely none of them spectacularly, and feels like a bit of a misstep for the series.

Can feel unfocused and messy
No way to fail
Looks dated

While The Devil's Daughter does a lot of things adequately, it does absolutely none of them spectacularly, and feels like a bit of a misstep for the series.

You may also like
Focus Home InteractiveSherlock Holmes: The Devil's DaughterPC