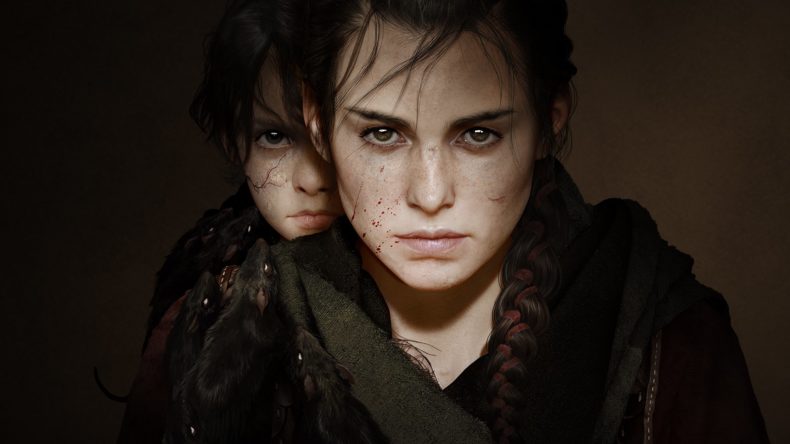 There’s a short, sharp audio cue that plays whenever A Plague Tale: Requiem is about to throw something horrific at you. The first time it happens it signals the coming of the Rats, the all-enveloping Darkness of this pseudo-fantasy Medieval world. By the time I was approaching the mid-point of the game, my trepidation at that sound had turned to excitement, and I realised that I had become hooked on the sudden, terrifying thrills of Requiem’s story.

This is not a fairy tale, even by the standards of this young franchise. It picks up shortly after the events of the first game, with protagonist Amicia deRune and her afflicted little brother, Hugo, travelling the idyllic foothills of Southern France. They’re heading for the Red City, a place where the deRunes – Amicia, Hugo, mother Beatrice and sort-of-adopted brother Lucas – can finally be at peace, and seek a cure for the macula. This disease is, in many ways, the true antagonist. Requiem introduces its fair share of human villains, too, of course, but the macula is a truly demonic presence, spreading the bubonic plague like wildfire and bringing with it a tide of flesh-eating rats. 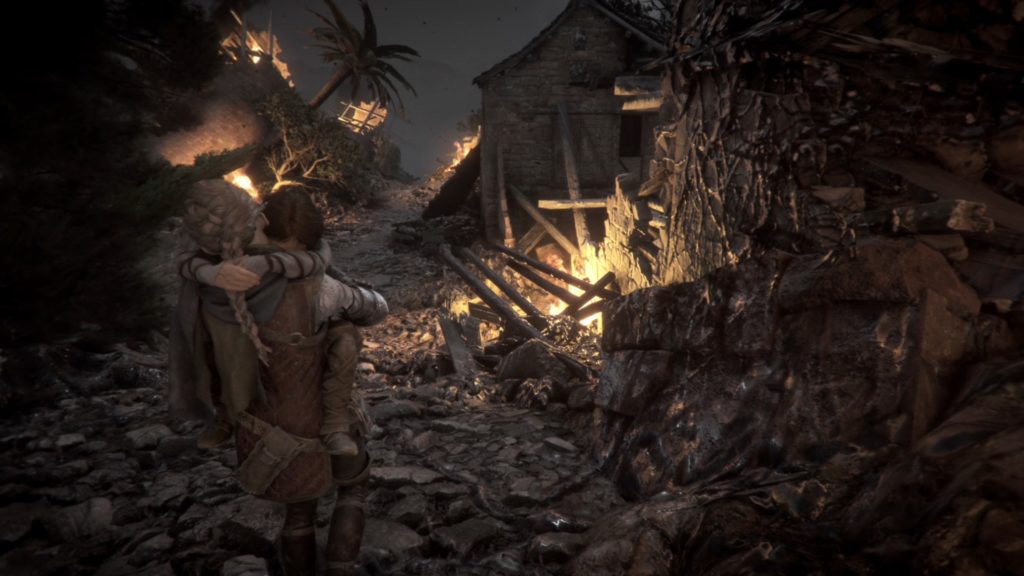 Where A Plague Tale: Innocence saw Amicia, Hugo and their little band of allies attempting to outrun the Inquisition across corpse-laden battlefields and midnight streets pulsing with a second skin of writhing black bodies, Requiem sees the siblings taking a more active stance. Hell-bent on curing her brother, or at the very least finding a way to understand the nature of the macula, Amicia lives life like a steam train. Her single-minded determination drives much of the plot, and her character development here is nothing short of mesmerising.

At various points, her steely demeanour cracks, and a demon burns from within. In these moments her sling and rocks become weapons of vengeance and rage, and woe betide anyone who tries to harm her family. As she and Hugo travel the countryside in the company of various new and returning characters, you’ll see beautiful, peaceful towns reduced to rat-infested graveyards, as a plague of rodents always travels close behind. Well, below, actually.

Asobo have done a tremendous job of building on what came before, even if cracks do begin to show during the final act. Whereas in Innocence Amicia could use her sling in a multitude of ways such as lighting and extinguishing fires, or luring rats away with the pungent Odoris, now she has more tools than ever before. A crossbow has been added to her arsenal with limited yet deadly bolts; and there are even more chemical compounds to mix together than before. Allies bring their own special abilities along, too, such as one who can slay enemies for you, and one who can use a special prism to create a pool of light around you. 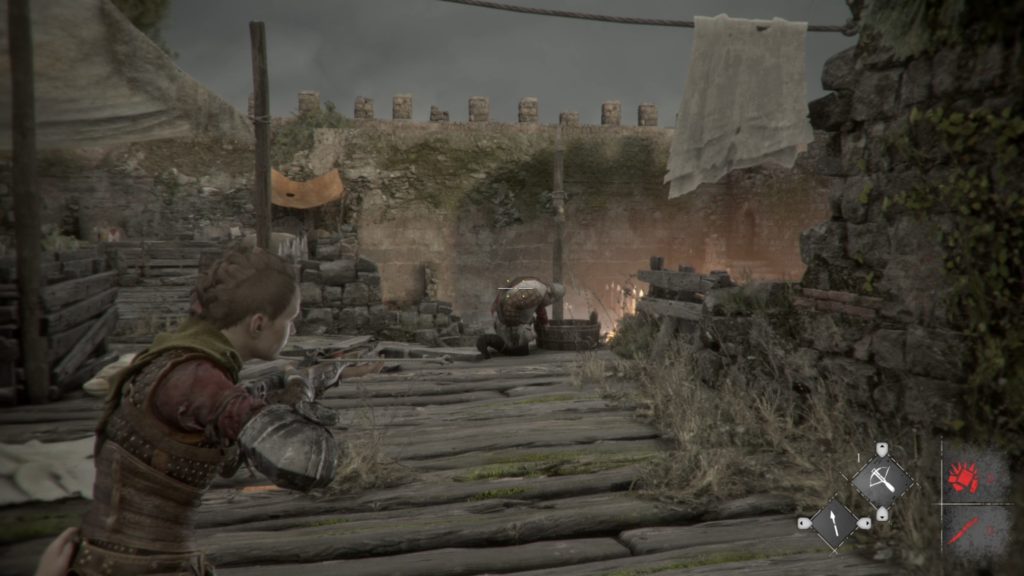 What this means during the first act is that you have more to find, more to collect, more to learn. What it means by halfway through the second act is that you have many, many, more ways to kill. Make no mistake, Requiem may be a stealth game at heart, but it’s also brutally violent at times – and not just because of the rats or the despicable enemies you face. Amicia herself is a devil when pushed, and witnessing the stresses that pile upon her as thickly as her physical wounds can be hard.

But this is also where A Plague Tale: Requiem threatens to undo itself. This is a game designed wholly to serve its story, and as such, there are contrivances and coincidences throughout. Need to get through that field despite the ten patrolling guards? Don’t worry: you have to get there for the story to continue so the game makes sure you can’t really fail. Resources are incredibly bountiful on normal difficulty, and I never reached a point where I didn’t have some method or another to clear my path. 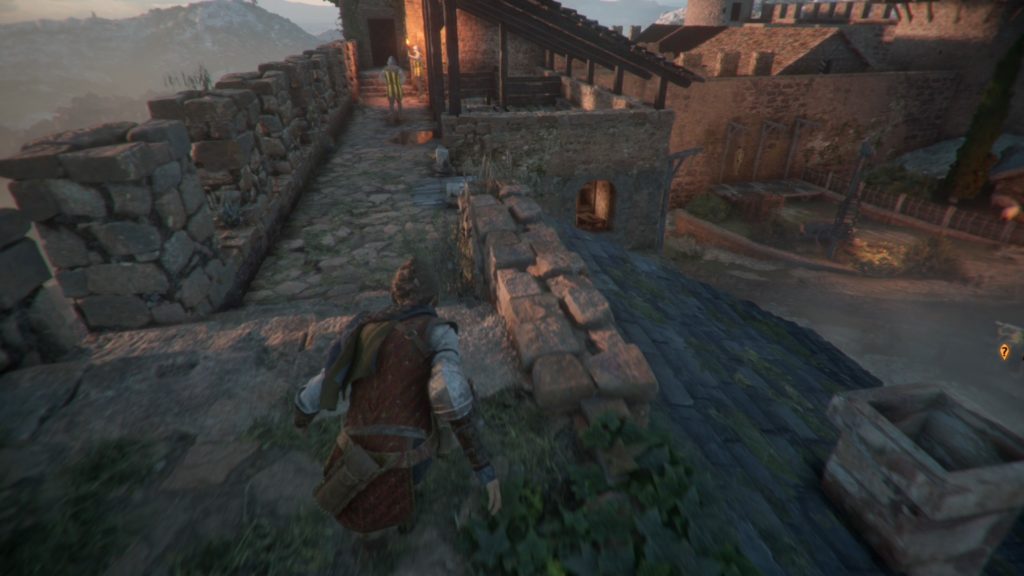 It’s never egregious until the final act though, when there’s so much combat that the game straight-up respawns ammunition and resources because if it didn’t, you’d get stuck and it would break. It’s an unfortunate side effect of the way Requiem is designed, but the writing and voice performances are of such high quality that the story always, always, carries it through.

The narrative ebbs and flows, never afraid to tease us with the possibility of peace for the long-suffering siblings before yanking it away, often in cruel and sudden ways. At times, Amicia tanks damage like the Terminator, and not since the Tomb Raider reboot have I seen a protagonist take such a relentless beating from the world around her. It veers close to “too far” once or twice, but Asobo steer this wagon with the skill of practised masters.

Along with all the action and hardship comes an upgrade system that offers meaningful, game-changing adjustments, and a levelling system that increases Amicia’s innate abilities based on how you play. Eschew violence for stealth and you’ll earn XP in the “Prudence” branch, while using items increases her alchemical abilities, and being violent improves her aggressiveness. These improvements affect how quietly she can sneak, how much damage her sling can do, and how long she can stun her opponents, among other things. It’s RPG-lite in some ways, but it fits the world seamlessly, allowing Amicia to grow physically as well as emotionally, even while the world is smacking her from pillar to post. 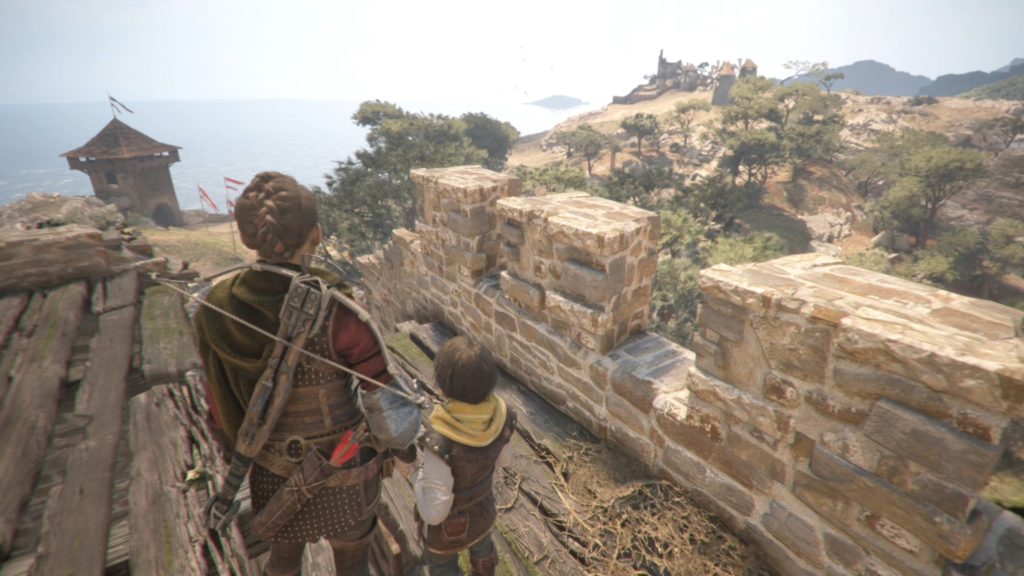 Something else A Plague Tale: Requiem builds on is the first game’s sense of atmosphere. The sound design is impeccable. Do yourself a favour and play this game with headphones on. Every shuddering breath, scraping footfall, nightmarish squeak from the shadows, overlays a rich tapestry held together by a rousing score that had me close to tears more than once. Combined with the striking visuals of cities reduced to smouldering ruins juxtaposed with vast, sun-drenched meadows, light-dappled forests, and sea-battered beaches, the world of Requiem is at turns utterly beautiful and deeply disturbing.

Which is a good thing, as you’ll spend a great deal of time exploring its many environs. There are collectibles to discover, secret upgrade chests to find, and small asides known as Souvenirs to uncover. But there are also environmental puzzles that require timing, teamwork, and usually fire of some kind to overcome. None are too fiendish, but all feel rewarding to solve – particularly one in Chapter 10 that took an age to solve but was absolutely worth the reward.

If there’s one complaint to be levelled here, it’s that the story takes a few more narrative turns than feel strictly necessary towards the end. It almost becomes contrived in the last few chapters, an issue compounded by several tough, combat-heavy set-pieces that forget all the careful planning, sneaking, and execution you’ve been taught for the last 15 hours in favour of insta-fail encounters that go on just a little too long. But if you’ve made it that far, you’ll be in it for the long haul, and the pay off for everything is a breathtaking climax that went to places I simply couldn’t predict.

There are moments here where A Plague Tale: Requiem struggles to hide the fact that it is, at the end of the day, a video game. It’s in animations that trigger despite being out of place just because that’s how characters are programmed; or respawning ammo so the game doesn’t paint itself into a corner; or maybe in sweeping over plot holes with unlikely conveniences. These things happen – rarely – and they need to be mentioned, of course, but they’re almost completely overshadowed by the standard of storytelling here. The writing, sound design, voice acting, and world-building are exceptional, and combine to create a sequel that’s as powerful as it is compelling. If Innocence put Asobo on the map, Requiem well and truly cements their place upon it.

Asobo Studios have delivered a runaway hit with A Plague Tale: Requiem. This is the very best kind of sequel: one that builds upon everything that came before and pays homage to its predecessor, while still carving its own path. Breathtaking.

You may also like
a plague tale: innocenceA Plague Tale: RequiemPC